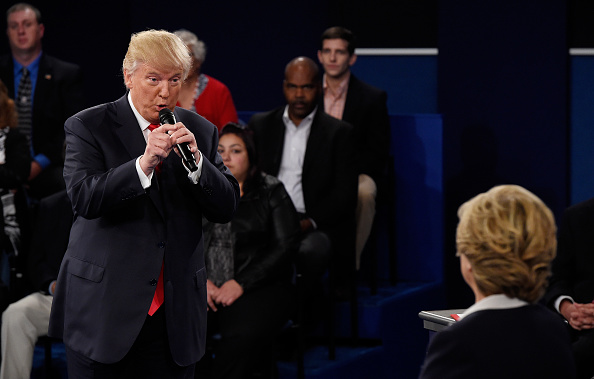 At the second debate and through the course of the past year, Trump has positioned himself as the flag bearer for people who inhabit what they believe is a country within a country. (Saul Loeb-Pool/ Getty Images)

Trump Will Lose the Election. But He May Still Win the War.

Trump is laying groundwork for the long game. It isn’t clear Clinton has one.

"Clinton seems to believe it’s sufficient to talk about how this or that policy will help the working and middle classes. But to win the war, people need to know what they’re fighting against and why it’s urgent for them to be engaged."

At the second presidential debate Sunday night, Donald Trump stalked the stage and waved the rhetorical equivalent of the “Stars and Bars” in everyone’s face. It was less a debate performance than a piece of theater. “You’d be in jail,” he snarled at one point, after Hillary Clinton said that it’s a good thing people like Trump aren’t in charge of making law. The nice thing about Abraham Lincoln, he said later, was that he didn’t lie, unlike her. And in a flip-the-script move that was a little too forced, he glared at her and chided: “You should be ashamed of yourself.”

Short of divine intervention or some such equivalent, Trump won’t be president of the United States. Not after that miserable debate, and not after the revelations of the last week. But this race isn’t really about who wins anymore. Trump is laying groundwork for the long game. It isn’t clear Clinton has one.

Trump’s plan is summed up in the symbolism of the Confederate flag, that enduring middle finger to “the system,” symbolism that’s rooted in some combination of racial hostility, Christian traditions, economic suffering and a general sense of betrayal. And there is in it, too, the adolescent longing to rebel and a gnawing sense of life’s deep unfairness. It’s a symbol almost custom made for Trump, capturing his racial antagonisms, the fathomless depths of his self-pity and his tendency to lash out without focus, leveling critiques but offering very little in the way of workable solutions.

At the second debate and through the course of the past year, Trump has positioned himself as the flag bearer for people who inhabit what they believe is a country within a country: people who think that Clinton should be in prison and that President Barack Obama was born in Kenya, who are persuaded that a flood of undocumented immigrants is overwhelming and corrupting American institutions, and that everything is, in general, just a “disaster,” as Trump said many times during the debate.

This other country isn’t big enough to elect Trump. But it’s plenty big enough to sustain the final act of his career. That’s why the second debate seemed less like an audition for office and more like a transition to his new role—the media star as provocateur and independent prosecutor of the rigged, totally corrupt system.

And Clinton? She’ll almost certainly win this battle, but will she win the war?

Clinton’s campaign slogan, “Stronger Together,” is meant as a direct contrast to Trump’s divisiveness and race-baiting. And it’s a welcome tonic, as far as it goes. The problem is that it doesn’t go very far.

Trump has a big-picture critique that is so broad it touches on truth at certain points. For example, it touches on truth when he talks about Clinton’s disturbing hawkishness and her servility to the corporations and wealthy donors who have fueled her campaign. At the debate, Trump seemed his most persuasive when he asked Clinton why she didn’t use some of the fortune she’s accumulated to self-fund her campaign—and thus avoid the corruption inherent in taking money from donors. Trump’s great liability is that his policies would only empower corporations and make the problems worse.

One of Clinton’s great liabilities is that she offers policies—some, if not enough—that are designed to address a big-picture problem that she seems incapable of framing with any conviction or, more often, even putting into words. It’s the very problem her opponent in the primary spent most of his time talking about: the absurd, immoral level of inequality in the United States.

Clinton seems to believe it’s sufficient to talk about how this or that policy will help the working and middle classes. But to win the war, people need to know what they’re fighting against and why it’s urgent for them to be engaged.

Bernie Sanders did that relentlessly, critiquing the rigged economy and calling for a political revolution. The Clinton strategy has always been to aim for incremental reform, and her vision won out. But even incremental reform won’t happen without a broader, bolder critique from Clinton about why it’s necessary.

That’s her task going into the final debate—and for the next few weeks and months. Trump will keep waving the rhetorical “Stars and Bars,” rallying his troops behind their shared cause. He’s gearing up for a long war. Clinton would do well to do the same. What’s at stake isn’t her election, but what she’s able to do with the power of the office.