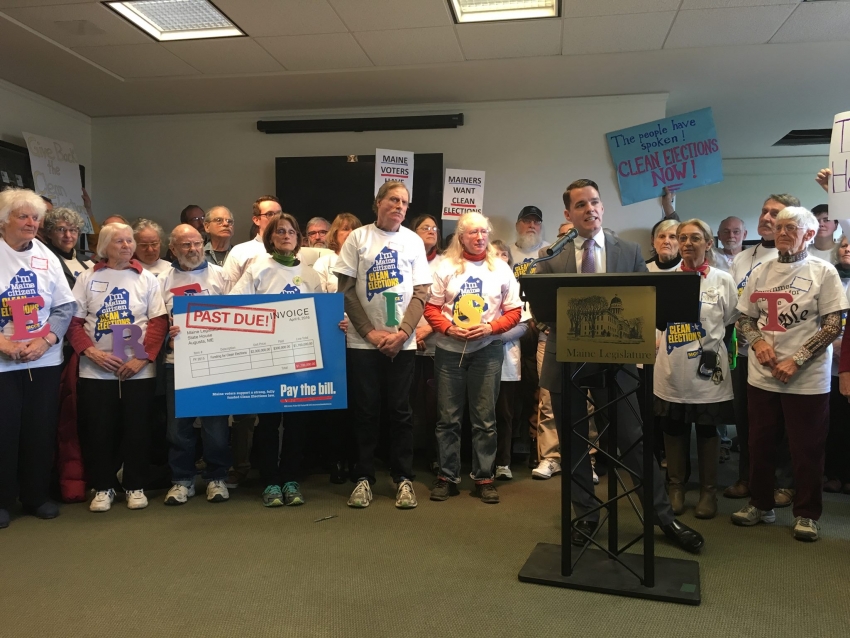 A $12 minimum wage by 2020 is up for a vote in Arizona, Colorado and Maine. (Mainers for Fair Wages/ Facebook)

"No soda taxes will be on state-level ballots this year, but it’s noteworthy that, as with plastic-bag bans a decade ago, they’re beginning to make progress at the local level."

Most state ballot measures spark little interest and have little impact. But each year, a few add energy to movements for national reform, and, occasionally, a ballot measure creates a tipping point in our national politics. Such momentum often comes from California.

This year, the state will vote on two potential tipping points.

First, Californians will decide whether to legalize recreational marijuana. The vote comes just six years after they rejected a similar proposal. But the opposition this time appears to have less energy and funding, while advocates have more of both. And there’s now a precedent to build on, with the legalization of recreational cannabis in Alaska, Colorado, Oregon and Washington. Polling in late October showed that supporters outnumber opponents by a 21-point margin.

Legalization of recreational use will also be on the ballot in four other states—Arizona, Massachusetts, Nevada and Maine—and four states will vote on legalizing medical marijuana: Arkansas, Florida, Montana and North Dakota.

The second potential tipping point involves a ban on single-use plastic bags in grocery, convenience and liquor stores in California. The measure is actually a referendum on a law passed by the state legislature in 2014. It was placed on the ballot by the plastic bag industry, in an attempt to delay and ultimately kill the legislation. But the law was relatively popular: A poll in 2014 found that about 60 percent of respondents supported it.

Many places have already taken steps to limit plastic bags, including at least 150 communities in California since 2007. If it passes, the referendum would give a strong boost to such local-level initiatives and, as the first state-level ban, create an important and influential precedent. A coalition of industry groups has spent at least $6 million opposing it.

Of course, momentum can also come from outside California and, this year, several other measures of interest to progressives are on state ballots. Here’s a look at some of them.

Two years ago, the threat of a ballot initiative pressured the Seattle City Council to pass a $15 minimum wage. Nothing similarly ambitious is on ballots this year, but a $12 minimum wage by 2020 is up for a vote in Arizona, Colorado and Maine. In Washington, the initiative calls for a minimum wage of $13.50 an hour by 2020.

These measures have strong public support. In Maine, for example, polling in September showed that about 60 percent of respondents supported the increase. A study by the Maine Center for Economic Policy found that about one third of workers in Maine would receive a raise. It also found that 90 percent of the workers who would benefit are over 20 years old; one-third are minorities; two-thirds work full-time; over half some education beyond high school; and one-fourth support a child.

In Colorado, voters will vote on creating a single-payer healthcare system, ColoradoCare, to be funded by a 10 percent payroll tax—two-thirds paid by the employer and one-third paid by the employee. People who are self-employed would pay the whole tax. The measure wouldn't prohibit residents from also buying private plans. Nonetheless, it has attracted strong opposition from private insurance companies, especially Anthem Inc., and the opposition has raised about $4 million to defeat it (versus less than $1 million raised by supporters). Polling on the measure has been mixed. A survey by the University of Colorado Boulder in mid-October found that 45 percent of respondents supported it. Other polling put the number at about 30 percent.

Coloradans will also vote on the “End-of-Life Options Act,” which would allow terminally ill people with less than six months to live to die by self-administering prescribed drugs. The initiative is based on the end-of-life law passed by Oregon in 1997, and it imposes tight restrictions on the process. The UC Boulder survey found strong support for the measure: 69 percent favored it.

No soda taxes will be on state-level ballots this year, but it’s noteworthy that, as with plastic-bag bans a decade ago, they’re beginning to make progress at the local level, after being defeated at least 43 times over the past eight years. In June, the Philadelphia City Council approved a 1.5 cents-per-ounce tax on sugary drinks. Next week, voters in San Francisco, Oakland and Albany, California, will vote on a penny-per-ounce tax. In Boulder, Colorado, they’ll vote on a two-cents-per-ounce tax.

In Washington, a measure would create a voucher system that gives voters three $50 vouchers to be “spent” as they choose on state-level races every two years. It would also create new donor-disclosure requirements for political ads, impose a waiting period on lobbying by former public officials, and limit contributions to politicians by contractors and lobbyists. The voucher plan is based on a measure that Seattle passed in 2015. That law will take effect next year, and will distribute four $25 vouchers to each voter to be used in campaigns for mayor, city council and city attorney. The measure passed by a wide margin in Seattle. Polling on Washington’s ballot measure has been mixed, with more than 40 percent of respondents undecided.

In Maine, Gov. Paul LePage has indirectly helped build support for a new voting system. LePage is a hard-right Republican who’s badly out of step with the state’s centrist politics, but he won his re-election bid in 2014 after a third-party candidate split the Democratic vote. He won his first election, in 2010, with less than 38 percent of the vote in a five-way race. Partially in response to LePage, the League of Women Voters of Maine has provided much of the energy to put a “ranked-choice voting” initiative on the ballot.

Supporters of the measure believe that it ensures that the candidate with the broadest support actually wins and empowers voters. The Portland Press Herald, in an editorial endorsing the measure, noted that it “represents a bold change, but it’s a change that would bring back something we’ve lost—consensus politics in a time of political fragmentation.”