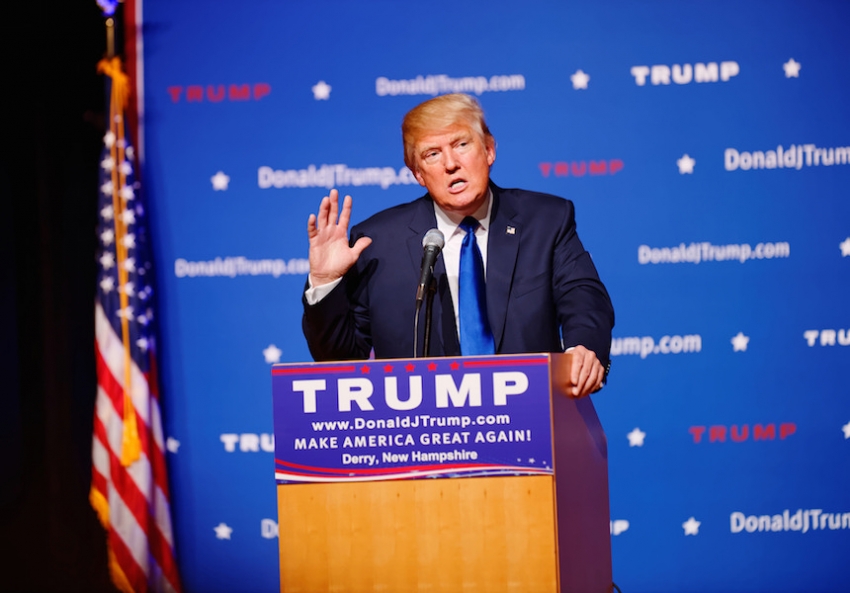 President Trump Is Just What the Private Prison Industry Ordered

The president-elect’s policies will help not only private prison companies but, as a new report explains, the banks that help finance them.

Kicking millions of people out of the country will require corporate assistance.

President-elect Donald Trump was typically vague, but to those who profit from mass incarceration the message was unambiguous: Under a Trump administration you will profit even more.

“I do think,” Trump said at a town hall this spring, “we can do a lot of privatizations and private prisons. It seems to work a lot better.”

But on August 18, Obama’s Department of Justice (DOJ) announced it was going the other way, issuing a memo arguing that private prisons “do not save substantially on costs” and “do not maintain the same level of safety and security.” They should, therefore, be phased out.

The private prison industry, dominated by just two firms, was shaken. The DOJ’s order wouldn’t have affected the private immigration detention facilities that have sprung up under Obama, who has deported more people than any previous president (though later that month, the Department of Homeland Security said it would review whether to continue using private detention facilities for migrants). Nor would it have directly affected the use of private prisons at the state level, where most of the business is done. But it did signal, from the top, that the future of the industry was in doubt.

Following the DOJ’s memo, GEO Group, which pulled in $1.84 billion in revenue in 2015, and Corrections Corporation of America, which finished a close second with $1.79 billion—both up from the year before—saw their stocks hit record lows. In 2015, about half of the industry’s business came from contracts with the federal government: 51 percent for CCA and 45 percent for GEO. This was, a Bloomberg headline declared, “the End.”

“The momentum was going in that direction,” Benjamin Davis, a research and policy analyst at the nonprofit In the Public Interest, tells In These Times.

“Then Trump was elected, and he said private prisons are a good thing and he says he’s planning to deport two to three million immigrants. … Unfortunately, it looks like the momentum has swung back in the direction of private prisons.”

Now the companies’ stocks are back from the dead. GEO Group’s share price soared 31 percent in the week after Trump’s November 8 victory, while CCA (which rebranded itself as “CoreCivic” shortly before the election) saw the price of its shares rocket up by more than 46 percent. Couple Trump’s renewed push for privatization with his call for more and faster deportations—building on the infrastructure provided by Obama, including dubiously legal private prisons for immigrant families—and an industry that a few months ago was in jeopardy could see record profits in its core area of business: holding human beings behind bars.

“I am disheartened, stressed, anxious, and at a loss,” says Mercedes Castillo, an immigration and criminal defense lawyer from East Los Angeles, when asked what the election result has meant to her. “Right now, after several of my clients have called, texted, emailed, Facebooked—sat in my office and cried— I have nothing to say but, ‘I will fight for you and with you.’ ”

She doesn’t expect that fight to be easy.. “I hope that I am wrong, but I believe [Trump’s win] means that more for-profit prisons will be built in remote locations, housing more and more noncitizens, under deplorable conditions—with less access to lawyers, doctors, family—prompting them to give up their legal rights in exchange for release.”

In Castillo’s experience visiting clients in California, government facilities are bad enough—but strictly for-profit ones are even worse. Guards are often “over-worked and underpaid, which contributes to low morale,” she says. This lends itself to “[its] own share of human rights violations.” The companies, meanwhile, don’t have any real incentive to care: They’re “making money from heads in beds,” as Castillo puts it. Corporations seek to maximize quarterly profits, not human happiness—much less the happiness of the 2 to 3 million non-citizens the president-elect says he wants to immediately deport.

As the companies tell it, it’s just a happy coincidence that the new regime in Washington is planning to enact an agenda favorable to their interests.

“As a matter of longstanding policy, our company does not take a position on or advocate for or against criminal justice or immigration policies,” reads a statement from GEO Group provided to In These Times. “We look forward to working with both the new administration and the new Congress in continuing our longstanding partnership with the federal government.”

Jonathan Burns, a spokesperson for CoreCivic, tells In These Times his company has a “longstanding policy” not to take positions on proposals “that determine the basis or duration of an individual’s incarceration.” In other words, they lobby for the use of their services—the company has spent $1.89 million on these efforts in the last two years—and leave it to those they lobby to connect the dots. At the same time, they give money to politicians who say what they like to hear.

According to the Center for Responsive Politics, CoreCivic’s Political Action Committee dropped more than $104,000 on federal congressional candidates in 2016, 84 percent of whom were Republicans. Its employees also gave over $117,000 to Republicans (compared to $11,000 for Democrats).

In January 2017, a then-President Trump will go to work with Republican majorities in both the House and Senate. That’ll be good news not just for the private prison industry, but for the banks that enable private prison firms to exploit tax laws and expand their businesses.

“An analysis of financial documents filed with the U.S. Securities and Exchange Commission (SEC) over the past 10 years shows that six Wall Street banks”—Bank of America, JPMorgan Chase, BNP Paribas, SunTrust, U.S. Bancorp and Wells Fargo—“play large roles in financing CCA’s and GEO Group’s debts,” states a report released today by In the Public Interest, a group that advocates for public control over state services. That debt financing is important: Both prison companies are, for tax purposes, formed as real estate investment trusts—their real estate being detention facilities that house well over 100,000 people.

To maintain this advantageous tax status (GEO paid just $7.4 million in foreign, federal and state income taxes last year on its $1.84 billion in revenue), they must limit how much cash on hand they can have at any time, with 90 percent of their income required to be passed on to investors—and that’s where the banks come in. Each company has a syndicate of at least a half-dozen financial institutions providing them with access to a combined $1.8 billion in always-available credit, which is what enables them not only to exist, but to expand.

“Additionally,” the report states, “by collecting interest and fees on outstanding debt, the banks are complicit with CCA and GEO Group in profiting from mass incarceration and the criminalization of immigration.”

There’s a potential upside from the industry’s profitable dependence on debt financing, however: Unlike, presumably, a Trump administration, the banks may be receptive to public pressure. In Portland, Ore., the City Council is expected to vote this month on divesting from Wells Fargo over its role in for-profit prisons. At some point, if other cities and advocacy groups keep pressuring the banks, the banks could decide that this tiny part of their overall business isn’t worth the hassle. This could hinder not just the private prison industry but the planned deportation of millions: Over 60 percent of the at least 34,000 beds that Immigration and Customs Enforcement has available for detained migrants are owned by private companies, according to a report by the Center for American Progress. Kicking millions of people out of the country will require corporate assistance.

“One thing is certain under a Trump Presidency: We will no longer even have the veneer of relying on the federal government to protect immigrant and refugee communities,” says Amanda Aguilar Shank, deputy director of immigration and anti-incarceration advocacy group Enlace, which has been pressuring cities like Portland to divest from the private prison industry and the banks that finance it. “To protect ourselves,” she tells In These Times, “we have to use the power we have at the local level, and the power of our dollars.”

Of the six banks chiefly responsible for financing private prisons, only SunTrust responded to a request to comment on how funding the industry comports with their stated commitment to corporate responsibility. “We do not comment on client relationships,” spokesperson Thomas Crosson wrote in an email.

With Washington and Wall Street standing to profit politically and financially from putting millions of noncitizens through a money-making detention system, solidarity backed by meaningful action is needed now or never. The last eight years have been especially hard for immigrants, with refugees from Central America—many of them children—stashed in detention centers and sent back to the countries from which they fled. That, under a liberal Democrat. But things can get worse, many are realizing, and some are preparing for it.

Castillo, the immigration attorney, says the first thing we need is “more collaboration”—more intersectionality, not atomistic leftism where individual struggles remain divorced from each other. “If we call for protests, boycotts, etc., it would only work if the majority of us—11 million undocumented and their allies—work together. That will be the challenge in the upcoming weeks.” She’s prepared to fight, but as she tells In These Times, she and her clients will need all the help they can get “as we battle it out with the chumps.”

Charles Davis is a journalist published by outlets such as Al Jazeera, The Intercept, The Nation and The New Republic. Follow him on Twitter: @charliearchy.