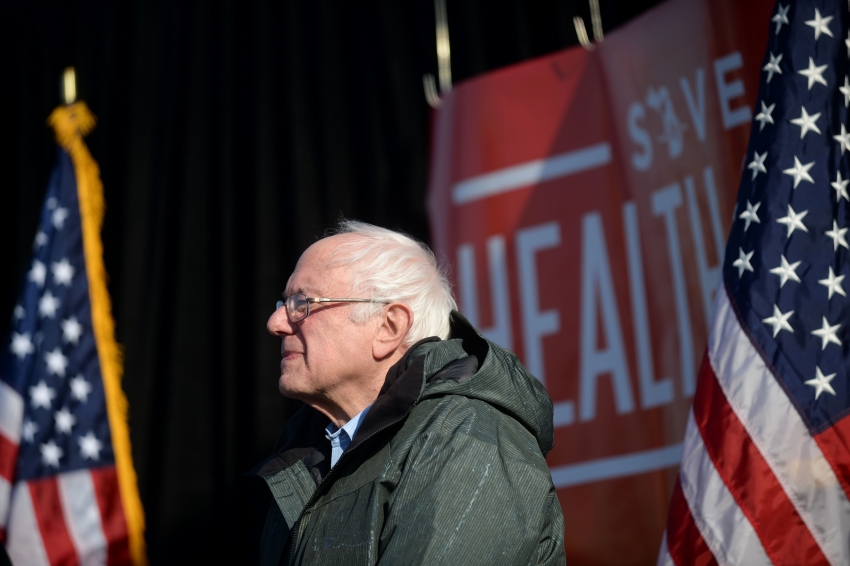 Our Revolution promised that the Sunday rallies are “only the beginning of our fight.” (Photo by Rachel Woolf/Getty Images)

Protesters rally in cities nationwide, promising to fight for the long haul.

"If Republicans try to rip healthcare out of the hands of millions of Americans, we will fight them every step of the way.'

Rallies to defend the Affordable Care Act, held in at least 40 cities Sunday, demonstrated a gathering wave of resistance to the GOP’s agenda of repealing Obamacare, privatizing Medicare and cutting social service programs.

“The hope that we find in this moment is that we are going to join arms and nothing is going to separate us on any fight that we pick this year,” said Mary Kay Henry, international president of the Service Employees International Union (SEIU), at a rally in Chicago. The rally filled the meeting space of the SEIU Healthcare headquarters there. An overflow crowd of about 300 people watched what was happening on a screen set up in a nearby parking lot.

“We’re disappointed with the threat to the ACA and wanted to come out and show our support for keeping it intact,” said Tom Dennis, a Bernie Sanders supporter from the Chicago suburbs, who attended with his wife and three sons. Dennis said it’s hard to know what effect the rallies will have, but “we hope that showing a presence wherever we can will get someone’s attention.”

The rallies were promoted and organized by Sanders and Our Revolution, the organization that emerged from his presidential campaign. They featured Democratic leaders and speakers representing a broad range of progressive allies—including labor unions, Planned Parenthood, faith and senior groups—as well as people who gained access to healthcare through the law.

At a Boston event, Massachusetts Sen. Elizabeth Warren told the rally that “if Republicans try to rip healthcare out of the hands of millions of Americans, we will fight them every step of the way.” Sanders spoke to an estimated crowd of 6,000 people at a rally outside a community college in Macomb County, Michigan, near Detroit. His appearance there was significant: The county has become symbolic of Democrats’ struggles with the white working class. It went for Barack Obama twice, but Donald Trump handily won it in November.

About 20 million people have gained access to health insurance because of Obamacare. A 2016 study by the Robert Wood Johnson Foundation and the Urban Institute found that, if Obamacare were repealed, about 24 million people would lose their health insurance by 2021, and the total number of uninsured in the United States would be 53.5 million—nearly 20 percent of the population. Eliminating Obamacare’s expansion of the Medicaid program, which serves low-income people, would account for more than 14 million of those losing coverage.

A nonprofit organization that took part in the Chicago rally, Thresholds, offers a small window on the broader stakes. It provides help and services to around 15,000 people who have addiction problems and mental illness. The organization’s chief executive, Mark Ishaug, who spoke at the rally, recently told USA Today that Obamacare was a “game changer” among the population that Thresholds serves. Some of them are former inmates, and Obamacare has allowed many of them to continue their treatment when they leave jail.

If Obamacare is repealed, “they won’t be able to receive medication or treatment,” said Yolanda McBride, a Thresholds staff member who attended the rally along with about 10 of the organization’s clients. “If Obamacare is cut, they’re kind of just out here alone [and there will be] more homelessness and crime going up.”

“Beginning of our fight”

Trump said this week that the GOP’s plan would provide “insurance for all” and would allow the Medicare and Medicaid programs to bargain with pharmaceutical companies on prices. Other Republicans are divided over what a replacement plan should look like and when it should be introduced. Kentucky Sen. Rand Paul, who has been among the most visible GOP leaders in the discussion, has suggested that the party’s plan will focus on health savings accounts, tax credits and cheaper policies that offer less coverage.

A Sanders supporter at the Chicago event was hopeful that Trump’s vanity, and the pressure brought on him by such protests, might make a difference. Our Revolution promised that the Sunday rallies are “only the beginning of our fight.”

“If you want to improve the Affordable Care Act, let's work together,” Sanders said. “But if you think you're simply going to throw millions off of health insurance, you've got another guess coming.”