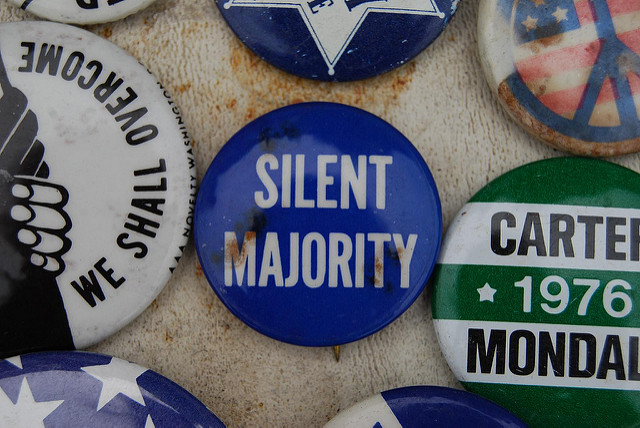 On most policy questions, polling shows that about three-fifths or more of the public prefers progressive positions. (Christina B Castro/ Flickr)

Progressives Are the New Silent Majority

Most Americans actually prefer progressive policies—so how did we get here?

"There is no easy answer. But for Democrats looking for a path back to power, lifting up the grievances of the forgotten, silent majority—and focusing on the economic and electoral structures that stifle and suppress its voice and vote—would be a good place to start."

Something remarkable has happened over the past few years: A new silent majority has emerged, decades after Richard Nixon made that phrase famous. Nixon meant the people whose values were, he said, dominant in American culture, but underrepresented in American politics. Calling them the silent majority was a way of channeling the white backlash against the civil rights movement.

The new silent majority is defined by the broad consensus that has emerged in the United States around progressive policies. This consensus isn’t widely reported. In fact, it’s obscured by the oft-repeated idea that the nation is deeply polarized, as if Americans are torn between support for conservative and progressive policies. They aren’t. On the battlefield of ideology, conservatives have been routed.

The progressive consensus cuts across economic and social issues and includes even traditional culture-war flashpoints. On most policy questions, polling shows that about three-fifths or more of the public prefers progressive positions.

Healthcare reform: In a Gallup survey last year, roughly half of respondents favored repealing Obamacare, while half favored keeping it. But 58 percent supported a third option: replacing it with “a federally funded healthcare system providing insurance for all Americans.” The wording is vague, but that sounds a lot like the single-payer, “Medicare for All” system that progressives have lobbied for.

Unions: Fifty-eight percent of respondents to a 2015 Gallup survey said they “approve of” labor unions—and 72 percent said unions should have either more influence than they now have, or at least the same amount. Historically, the approval rate was in the 70s through the mid-1960s. It declined to roughly 60 percent in the early 1970s and dipped to the high 40s in the wake of the financial meltdown of 2008, but has steadily recovered since then.

Campaign finance reform: Seventy-seven percent of the public supports limits on campaign spending, according to a 2015 Pew poll. Voters in the deep-red state of South Dakota made that clear last November by approving a sweeping campaign-finance reform initiative. The measure passed despite strong opposition from the state chapter of Americans for Prosperity, a PAC funded by the Koch brothers.

Climate change and renewable energy: There was a sharp spike in people who reported that they are at least “a fair amount” worried about climate change last year—from 55 to 64 percent—according to Gallup. The share of people who believe that the effects have already begun also rose, from 55 to 59 percent. It’s true that opinions about climate change fluctuate significantly based on current events, the wording of the question and other factors. A recent Pew poll, for example, found that only 48 percent of respondents believed human activity causes climate change, versus 65 percent in the Gallup poll. But whatever they believe about the causes, Americans overwhelming agree about solutions. In the Pew poll, support for solar panel and wind turbine farms was more than 80 percent. A majority opposed every other potential energy source: offshore drilling, nuclear power plants, fracking and coal. And a post-election poll found that even people who voted for Donald Trump are on board with taking some action against climate change. Sixty-one percent said that companies should be required to reduce carbon emissions, and 78 percent support air-pollution regulations.

Reproductive rights: Fifty-six percent of Americans believe abortion should be legal in “all or most cases.”

LGBT rights: In 1996, 27 percent of Americans thought same-sex marriages should be legal. Last year, 61 percent did. And, by a narrow majority, most Americans believe that transgender people should be able to use the public bathroom of the gender they identify with.

The list of issues on which roughly 60 percent of Americans agree with progressives could go on at length. It would include, for example, a higher minimum wage, legalized marijuana and free child care. The trend holds true even on Trump’s signature issue of immigration. Last summer, Gallup found that 84 percent of Americans supported a path to citizenship for undocumented immigrants, while only 33 percent supported building a wall along the U.S.-Mexico border. Among Republicans, 62 percent supported building the wall—but 76 percent also supported a path to citizenship.

Americans prefer progressive policies nearly across the board, yet the federal government and a majority of state governments are controlled by a party that aims to undermine, overturn and resist those policies.

How did this happen?

Democracy plays a minor role. White, elderly people vote at higher levels than any other demographic bloc, and they vote Republican, especially if they identify as Christian.

That advantage would make the GOP a competitive but distinctly minority party if the playing field were level. But the playing field isn’t level. Increasingly, the GOP uses anti-democratic tools to tilt the field to its advantage. Those tools include radical gerrymandering of Congressional districts, voter suppression in competitive states and flooding the political process with dark money from corporations and wealthy donors. These are in addition to the strong bias toward small, predominantly white Republican states built into the Senate and the Electoral College, and the use of preemption laws by state legislatures to block progressive policy in urban centers.

Together, these measures radically inflate the power of the GOP’s comparatively small base of white religious conservatives, transforming it into an electoral juggernaut. At the same time, they pull the Democratic Party to the right, making it ever-more reliant on corporations and wealthy donors in an attempt to remain competitive in a rigged system.

A path back to power?

The worst example of the process to date is North Carolina, where the GOP-dominated legislature is so corrupt that the state is “only slightly ahead of the failed democracies that constitute much of the developing world,” as Andrew Reynolds, a professor of political science at the University of North Carolina, recently wrote.

Reynolds noted that the state’s gerrymandering is especially obscene. It’s not only the worst case of unfair districting in the United States; it's the worst case “ever analyzed by the Electoral Integrity Project,” which “has measured 213 elections in 153 countries and is widely agreed to be the most accurate method for evaluating how free and fair and democratic elections are across time and place.”

It's the same story across the nation. Trump’s victory is the anti-democratic system in microcosm: The GOP wins with a minority of votes and claims a mandate to push through policies that a majority of the nation opposes. Voters feel, rightly, that their voices don't count. They become more cynical and disengage, while the Republican minority feels ever-more empowered. There is nothing in their way and no authority that can derail their power grab. Our “polarization” is more like a hostage-taking.

We've heard a lot since the election about white working class voters who feel disenfranchised and put Trump over the top. That story is certainly worth telling. But it pales by comparison with a much bigger, largely untold story: the 60 percent of Americans who support progressive policies and have little voice in the nation's politics.

The problem has been decades in the making. There is no easy answer. But for Democrats looking for a path back to power, lifting up the grievances of the forgotten, silent majority—and focusing on the economic and electoral structures that stifle and suppress its voice and vote—would be a good place to start.