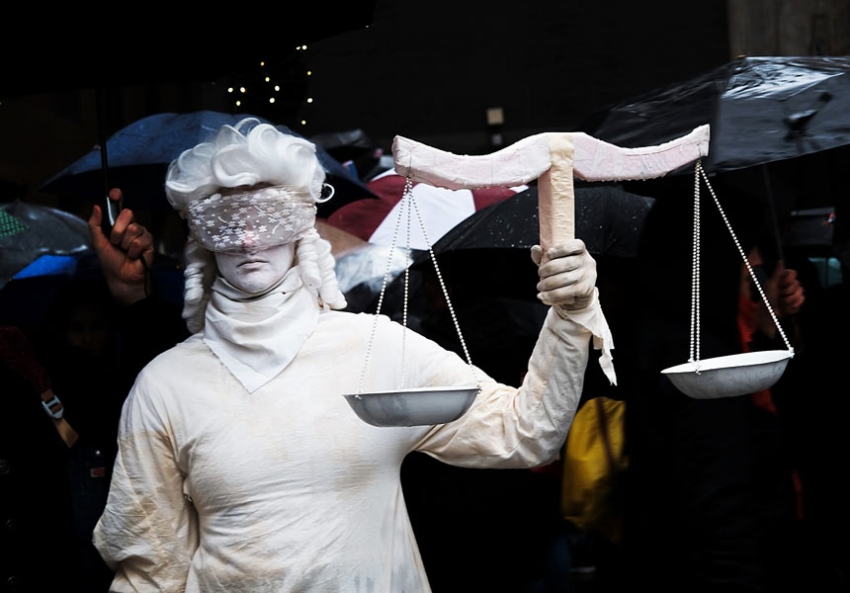 Indivisible: The Left Group Shaking Up Congress From the Grassroots

Can progressives have their own Tea Party? Many have floated the idea over the last several years, hoping to recreate the electoral success of that movement. But an upstart new organization called Indivisible is pulling another lesson from insurgent Republicans: how to obstruct a president’s agenda and change the debate in Congress from the grassroots up—starting with a 24-page Google Doc.

In the days after the election, former congressional staffer Sarah Dohl “saw an uptick in people joining [anti-Trump] Facebook groups,” she says, and “a lot of well-meaning people giving pretty bad advice.” Some suggested signing massive online petitions; others urged progressives to call the offices of high-ranking members of Congress, rather than their own representatives. Dohl’s experience told her these tactics were unlikely to work.

Her former colleague Ezra Levin was having similar concerns, and around Thanksgiving, he reached out to Dohl with an idea. Levin, his wife, Leah Greenberg, and their friend, Sara Clough, had met at a bar in Austin and decided to start working on a strategy of their own. They put together a loose group of some 30 former congressional, union and nonprofit staffers, and, on Dec. 14, 2016, made their work public. The “Indivisible Guide” Google Doc—a no-nonsense, step-by-step handbook for constituents to become a thorn in the side of their representatives in Congress—went viral.

The guide lays out what motivates politicians (“reelection, reelection, reelection”) and how to get under their skin, all the way down to which events are worth attending and how to get people to show up. Granular might be too broad a word to describe the level of detail: “Sit by yourself or in groups of 2,” a section on town halls advises, “and spread out throughout the room. This will help reinforce the impres-sion of broad consensus.”

Dohl began her stint as the communications director for Rep. Lloyd Doggett (D-Texas) in 2009, when Democrats controlled the White House and Congress. “It should have been the best time in the world to be a congressional staffer,” she says. She and her Democratic colleagues felt a progressive agenda was within reach. But after the Tea Party’s April 15, 2009, Taxpayer March on Washington, everything changed.

When Doggett arrived back in his home district for the August recess, Tea Partiers showed up at meet-and-greets with cardboard tombstones bearing his name and pictures of him on which they’d scrawled devil horns. Similar scenes played out around the country.

“The Tea Party followed us anywhere we went,” Dohl recalls. “Everything that had been on the table at the beginning of 2009—with our incredibly popular president and supermajority—was suddenly at risk,” due to renewed Republican intransigence and fear of backlash among Democrats. Doggett survived his re-election campaign, but the ambitious plans he and his staff entered with—from immigration reform to tougher campaign finance law—did not. The Tea Party also “made sure that if we did get a legislative win, like the Affordable Care Act, that it was unpopular from the start,” Dohl adds. “They hijacked the entire narrative.”

Consciously taking a page from Saul Alinsky’s Rules for Radicals, the Tea Party deployed tried-and-true community organizing tactics to put targets on both the White House and the establishment Republicans who had, in their view, been responsible for losing the Oval Office and enabling a leftward policy drift. The result was what can only be described as a wholesale transformation of the GOP.

Now, the tactics coopted by the Tea Party are being reclaimed by the Left. While Indivisible is not emphasizing the 2018 election, they are already turning up the heat on current representatives—in both parties. “One of the reasons we believe the Tea Party was successful was because they targeted members of their own party to reject bipartisan compromise, and move a little bit further to the Right,” Dohl says. “You may have a Democratic member of Congress, but there’s no guarantee of how progressive that member is going to be. We want Democrats not just to be blue, but to be bold.”

In late January, Indivisible called on its chapters to target the 14 Democrats who voted to confirm Mike Pompeo as CIA director, and the group has supported local chapters putting pressure on Sen. Diane Feinstein (Calif.) and Sen. Chuck Schumer (N.Y.), who have voted for several Trump nominees.

“We believe that we must embolden Democrats to stand up and speak out on any policy or proposal that could threaten our values,” Dohl says.

Indivisible now has its own website, where progressives can download toolkits for how to get started, and find and join local groups that organize using the guide’s strategies. So far, more than 4,500 chapters—representing every state—have sprouted up.

Ivonne Wallace Fuentes, an associate professor of history at Roanoke College in Virginia, finished reading Indivisible’s guide shortly before the New Year. “I had a lot of academic experience with leftist politics, but it’s totally different from, ‘How do I then try to do something in my own community?’ ” she says. “This was a recipe.”

On January 2, her representative, Bob Goodlatte (R-Va.), introduced an amendment to the House Rules package that would have put the Office of Congressional Ethics, an independent entity that reviews congressional misconduct allegations, under the oversight of a Republican-led committee.

Wallace Fuentes was appalled. She posted on social media and emailed the members of the newly formed Roanoke Progressive Rapid Action Task Force—a group she then decided to register as a chapter of Indivisible. On January 4, a delegation of 12 went to Goodlatte’s Roanoke office to deliver New Year’s cards, one bearing the message, “We Expect Better!”

By the time the cards were delivered, Republicans had already withdrawn the amendment after vocal nationwide backlash—but the demonstration provided Goodlatte a warning for what to expect over the next four years.

While Roanoke has long been a Democratic stronghold in a traditionally red district, “This is not Brooklyn or San Francisco,” Wallace Fuentes tells In These Times. “Many people here feel isolated, and most everybody either knows or is a family member or a friend of someone who voted the other way.” Indivisible Roanoke, she hopes, can be “a community … where what’s bringing you together is this shared sense of civic responsibility toward this system that’s going off the rails.”

The Indivisible Roanoke Facebook group quickly ballooned to more than 200 members. “We’re not asking anybody to build a barricade, or do anything that isn’t celebrated in our system. We’re asking people to be more engaged,” says Wallace Fuentes.

They also aren’t asking people to do it alone. More than 60 thousand people joined a January 22 call co-hosted by Indivisible, the Working Families Party and MoveOn.org to seize on the momentum of the post-inauguration Women’s March. More than 10,000 pledged to visit their senator’s office, Democratic or Republican, on Tuesday, January 24, to pressure them to oppose Trump’s cabinet nominations.

On January 30, tens of thousands joined an emergency Indivisible call to fight the Muslim ban. And Indivisible is just getting started, says Dohl. “This work … isn’t a sprint—it’s a marathon.”

If the momentum keeps up, Republicans and Democrats alike may be forced to start representing more than just their corporate donors and Beltway advisers. They may have to answer to the people who elect them.