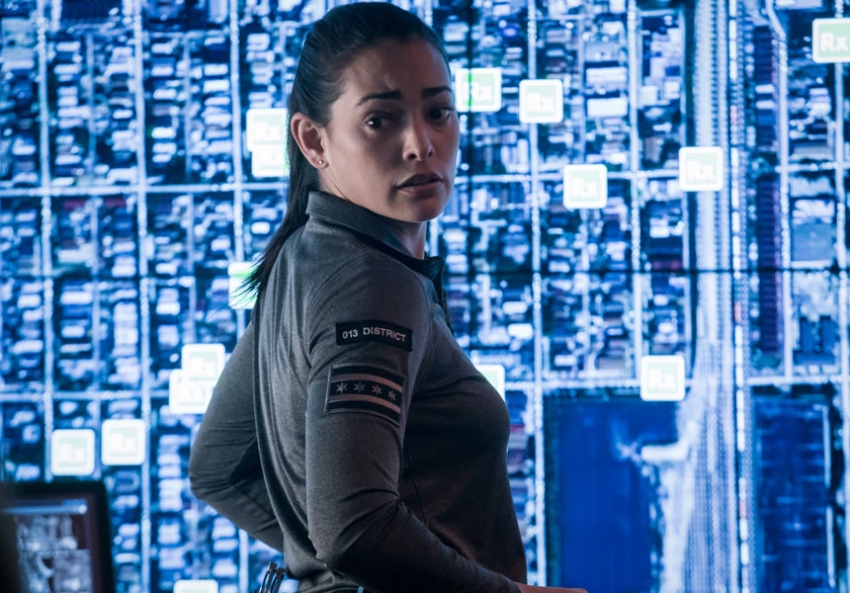 To the writers (and characters) of APB, fighting crime is a purely technical problem. (Fox Broadcasting)

The Best Police Money Can Buy

In the Fox series APB, police misconduct doesn’t exist, and privatization and technology can fix any problem.

The fantasy of technology, like the fantasy of privatization, is that it can take the politics out of policing.

If one were to produce an infomercial proclaiming the benefits of a corporate-run high-tech police state, the result might be something like the new Fox series APB. The show follows the adventures of billionaire engineer Gideon Reeves (played by Justin Kirk), who, after witnessing a friend’s murder while on hold with 911, decides the cops are due for an upgrade.

He therefore buys a police precinct in Chicago—simply writing a check to the City Council and threatening to fund their opponents if they refuse—and runs it as a private fiefdom. Thankfully, APB is unlikely to last more than a season. Future historians, however, may find it useful as an ideological artifact of early-21st-century neoliberalism—the belief that private enterprise is more efficient, effective and innovative than state services; that progress is always technical, rather than political; that advances come only from individual intelligence and initiative; and that the public good is best advanced through personal philanthropy.

This logic is applied to the police in APB, but it could just as well attach to the post office or the Environmental Protection Agency. It’s the same thinking behind charter schools and Blackwater-style military contractors. In fact, APB is just a half-step from reality: In Oregon, for example, the Portland Business Alliance has hired its own armed patrols to maintain “order” downtown, and even leases sworn officers from the police department.

The show may be of interest as an artifact, but as art, it has little to recommend it. Reeves is charming in an arrogant, wisecracking, Tony Stark sort of way, but otherwise weirdly blank— or just badly written. The fact that he views his friend’s murder as just another engineering problem tells you everything you need to know about the character. And the plots, such as they are, generally turn on the question of whether the good guys have better tech support than the bad guys. (They do.) The climax of every episode—predictably, a chase and/or fight, leading to an arrest—is presented at two levels simultaneously.

First there is the action itself: cops vs. robbers, remotecontrolled drones vs. shotgun-wielding thugs. Then there is the observation of the action: a crowd of police commanders, technicians and advisors, including (of course) Reeves himself, watching the dramatic finale on a giant screen in a high-tech war room. This means a surprising amount of each episode has us watching other people watch cops on television. Black Mirror might have turned this into a meaningful comment on surveillance or alienation—but here it’s just a clumsy tool for connecting the corner-office protagonist to the action on the street.

That protagonist is explicit about seeing crime-fighting as a technical problem, and he seems to give no thought at all to root causes like poverty. He instead takes for granted that the solution to crime is better policing—better defined as faster cars, lighter armor, smarter algorithms and the more frequent use of tasers. In this, he’s less an outlier than the norm: The neoliberal approach to public policy that has found bipartisan support sees politics as dirty, but corporate and police power as bland and benign. The fantasy of technology, like the fantasy of privatization, is that it can take the politics out of policing. To these reformers, the racial and economic inequalities that structure crime and policing might as well not exist.

But even by the show’s technophilic standards, the solutions it proposes aren’t as comprehensive as they seem. Reeves’s signature innovation is an app that bypasses the 911 system and summons police directly, providing them with an immediate audio and video link and location data. Somehow—the details are not explained— this allows police to respond instantaneously. That would be impressive, but obscures that many calls to police are not reports of crimes in progress; so the cops’ “response time” is not the most useful measure of their performance. But this doesn’t matter to Reeves or to APB, because if the show is ideologically tethered to our reality, in every other sense it’s totally detached.

Given the state of real-world policing, APB is surprisingly silent about racial profiling, excessive force or the fact that as recently as 2015, the Chicago Police Department was revealed to be illegally operating a secret jail and torture site. The show likewise says nothing of the inglorious and markedly un-philanthropic history of private police forces—most notably their use in strikebreaking. In the world of APB, the only thing wrong with the cops is that they lack the tools they need to do their jobs. It’s a line of thought that appeals to law-and-order conservatives, and in a more subtle way to many progressives as well.

The idea of impartial justice, and thus of impersonal policing, is seductive, and reformers of all kinds still sometimes invest their hopes in technical solutions: body cams, less-lethal weaponry, computerized statistics. The results are inevitably disappointing, though, because they misunderstand the problem. It’s not as though police engage in racial profiling and routinized violence because they use outdated software. These are structural features of the institution, directly linked to the inequality of our society. Changing that will require something more than a wealthy benefactor and a smartphone.