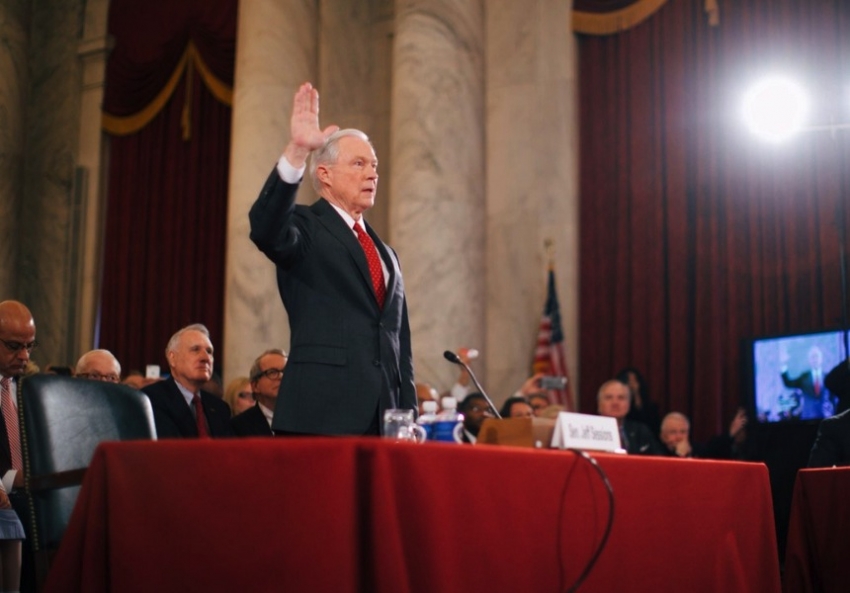 Jeff Sessions, confirmed as attorney general on January 10, says he will pull back on federal oversight of police.

Should police get rifles, riot gear and armored vehicles from the Pentagon? The nation’s largest police union thinks so—and it has the ear of the Trump administration.

In his first speech as attorney general last month Jeff Sessions signaled that he intends to “pull back” on federal oversight of local law enforcement, reversing course on a key police reform strategy of the Obama administration. “We need, so far as we can, in my view, help police departments get better, not diminish their effectiveness,” said Sessions in remarks to the National Association of Attorneys General.

The announcement hardly came as a surprise to police accountability activists, who warned from the outset that Sessions’ nomination could weaken police reform efforts. Another development, flying below the radar, could spell further trouble for efforts to reign in potential abuses by local police.

In January 2017, Congressman John Ratcliffe (R-TX) introduced a bill would make it easier for local police to get their hands on surplus military equipment. The bill now has 16 co-sponsors in the House and was referred last month to the Subcommittee on Crime, Terrorism, Homeland Security, and Investigations.

Since the 1990s, the Department of Defense (DOD) has been giving away excess gear through a federal program known as 1033. Most of the equipment is fairly mundane—office computers, treadmills and the like—but 1033 also makes weapons and tactical vehicles available to local police for just the cost of shipping. The program became the subject of nationwide scrutiny in 2014, when police used rifles and armored vehicles to confront protesters in Ferguson, Missouri following the killing of Black teenager Michael Brown.

Growing concern over police militarization led President Obama to announce, the following year, that law enforcement agencies would be banned from receiving certain items—including armed helicopters, grenade launchers and tracked armored vehicles—through federal programs. A new set of guidelines also designated gear such as mine-resistant ambush protected vehicles (MRAPs), 15-ton vehicles that can withstand roadside bombs, as “controlled” items subject to additional restrictions. The restrictions apply to the 1033 program, as well as programs administered by federal agencies such as the Departments of Justice and Homeland Security, which also provide support to local law enforcement through grants or excess equipment transfers.

The “Protecting Lives Using Surplus Equipment (PLUS) Act” would essentially undo Obama’s 2015 executive order, which is deeply unpopular among law enforcement associations and police unions. Such groups have charged that the restrictions put police officers’ lives at risk—even though, as In These Times reported last year, the changes have done little to stem the overall flow of surplus gear to cops. The most recent figures, provided to In These Times by Defense Logistics Agency (DLA) spokesperson Susan Lowe, show that $544 million worth of excess DOD equipment was transferred to police departments in 2016. This actually represents an increase from the previous year’s total of $518 million. (Lowe stresses that these represent the original acquisition value of the property.)

Police departments in some states were able to significantly bulk up their armories after the Obama-era changes went into effect. In Mississippi, seven of the eight MRAPs currently in use by police in the state were acquired in the 2016 calendar year. In North Carolina, eight of that state’s 13 MRAPs were delivered to local agencies between October and December 2016. And 13 of the 14 law enforcement agencies with MRAPs in New Jersey obtained their vehicles in the second half of last year alone. Together these are just a fraction of the more than 200 MRAPs that were shipped to local police in calendar year 2016, according to the DLA’s Lowe). Even American Police Beat, a respected trade journal, candidly observed in a March 2016 report that following Obama’s executive order, “it was back to business as usual in a matter of months.”

In an interview with In These Times, Jim Pasco, executive director of the Fraternal Order of Police (FOP), the nation’s largest police union, said this characterization was “nonsense.” Instead, he charged, smaller police departments have endured financial stress during the past year as a result of the changes, given that they now have to pay for “vital” equipment out of their own budgets.

Pasco acknowledged that armored vehicles were still available to local police departments, but criticized the new requirement that all such acquisitions go through a civilian review process. To receive restricted items, law enforcement agencies must submit a request outlining why the items may be needed. The request must be approved by a mayor, city council or other elected body. That amounts to a judgement “being made by a person who has absolutely no law enforcement experience,” said Pasco.

The FOP was an early endorser of Donald Trump’s candidacy, and Pasco is hopeful that the organization will have the ear of his new administration. In the pre-election survey given by the FOP to all presidential candidates, Trump described 1033 as an “excellent program that enhances community safety” and promised to rescind President Obama’s executive order. “We take him at his word,” said Pasco.

Until a vote is scheduled on the PLUS Act, the FOP will be “talking to anybody who will listen about the problem with the executive order,” said Pasco. While he hopes that bill will sail through, he also invokes a possible executive action by President Trump. One way or another, he says, “the situation will be remedied.”

This story has been updated to clarify the scope of President Obama's executive order.