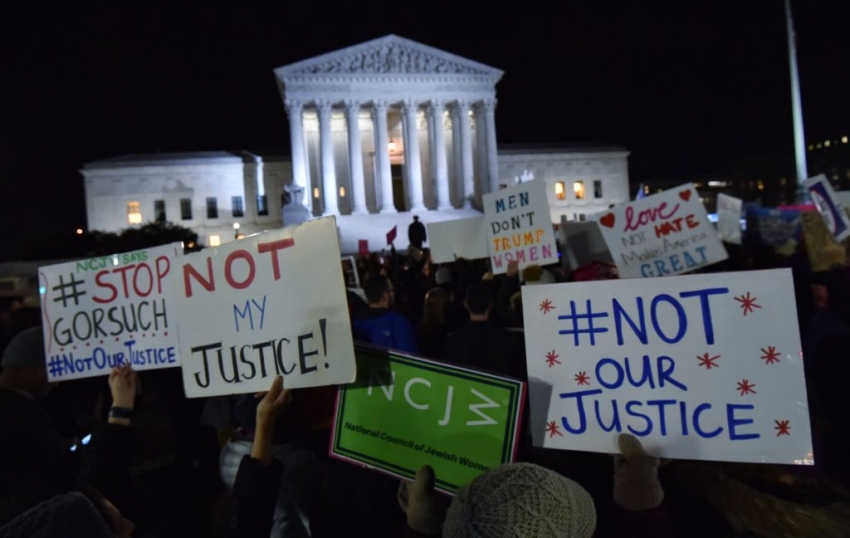 Politico reported recently that Democrats are “paralyzed” over how to respond to Neil Gorsuch. (PAUL J. RICHARDS/AFP/Getty Images)

Resister’s Digest: Grilling Gorsuch and Taking It to the Streets Against Trumpcare

“His [Gorsuch's] record reflects a pattern of systematically privileging the rights of religious believers over those of religious minorities and nonbelievers."

Hearings begin in Congress this week for Neil Gorsuch, Donald Trump’s nominee to fill the vacant seat on the Supreme Court. Politico reported recently that Democrats are “paralyzed” over how to respond. Dahlia Lithwick noted last week that Gorsuch’s stance on religious liberty might be their most powerful argument against him.

“His record reflects a pattern of systematically privileging the rights of religious believers over those of religious minorities and nonbelievers,” Lithwick wrote. That’s critical because perceived religious persecution is “at the heart of many front-burner social disputes, including those over LGBTQ rights, transgender bathroom access, abortion, access to birth control, sectarian prayer in public places, and marriage equality.”

Indivisible has guides to Gorsuch’s record on a range of issues here, along with sample dialogues to use in calling your representatives here. Sign NARAL’s petition against Gorsuch here, and find various tools for learning about Gorsuch and expressing your opposition at The People’s Defense. Go to the local reps page at Contacting Congress for a complete list of state and federal representatives and their contact information.

Trump’s victory has energized the right-wing religious liberty crusade at the state level. On March 10, South Dakota’s governor signed a bill that legalizes discrimination against LGBT people by taxpayer-funded foster care and adoption agencies. The bill is the first anti-LGBT legislation to pass in 2017, but dozens of such bills are at various stages of the process in state legislatures. For example, the Texas Senate has approved a bill that would require transgender people to use the bathroom that corresponds to their “biological sex” and would preempt local laws that allow them to use the bathroom of their choice. The bill is now before the House. Freedom for All Americans tracks the progress of anti-LGBT legislation and offers a “campaign-in-a-box” toolkit for activists mobilizing against anti-LGBT bills.

The House of Representatives is expected to vote on the GOP’s Obamacare reform and repeal bill Thursday, the seventh anniversary of the American Affordable Care Act’s passage. Several actions are planned throughout the week, including a march to Rep. Paul Ryan’s (R-Wis.) office in Washington D.C., on Wednesday, led by Rev. William Barber, president of Repairers of the Breach. Find details here.

Protests are also planned around Ryan’s fundraising trip to Chicago on Thursday. Details here. And there are protests of Obamacare repeal planned in Cincinnati on Wednesday, in Los Angeles, Cleveland, and Washington, D.C. on Thursday, and in Durham, North Carolina, and Seattle on Saturday. Go here to find details for other local events.

Rally at the border

The We Are One Foundation is sponsoring a “Nationwide Rally at the Border” on Saturday, near San Diego, to “bring people together to defend the civil rights of migrant workers and immigrants.” It features a program of “humanitarians, activists, artists, thought leaders, and speakers.” Details here. Gallup reported in mid-March that Americans’ “worries about race relations” had reached a record high, with 42 percent of respondents saying they worry about the issue “a great deal,” versus 17 percent in 2014.

The budget proposal released by the Trump administration last week calls for a 31 percent cut in the budget for the Environmental Protection Agency (EPA). People’s Action, in collaboration with Food and Water Watch, has called for a national day of action on Tuesday to protect the environment, with events in cities across the nation, including Denver, Minneapolis, Chicago, Detroit, Philadelphia and New York. Details here. Go here for customizable emails that can be sent to your representatives in support of the EPA.

Trump supporters are planning a series of “Make America Great Again” marches on Saturday. Counter-protests are also planned in several cities, including Denver, Sacramento, Lexington, Columbus and Philadelphia. In Houston on Friday, there will be a rally at Gov. Greg Abbott’s “State of the State” address, to protest his support for Obamacare repeal, the state’s anti-LGBT bill and other policies. There will also be a rally in Austin to defend public schools from proposed steep cuts.

Get the frack out

Last week, the Republican governor of Maryland, Larry Hogan, gave his support to an anti-fracking bill that recently passed the state’s House of Delegates, making its passage by the full legislature more likely. Hogan called the bill “an important initiative to safeguard our environment” and called on legislators to “finally put this issue to rest.” That would make Maryland the first state with frackable natural gas to pass such a law.

Hogan’s comments came a day after 13 people were arrested during an anti-fracking protest at Maryland’s statehouse, part of a broader campaign that “has heated up in the last few months,” according to Food and Water Watch. It noted that “recently more than 1,000 people marched through Annapolis and joined a massive Don’t Frack Maryland rally, hundreds of health professionals and business owners signed letters calling for a fracking ban, and so far more than 35,000 Marylanders have sent ban-fracking petitions to legislators.” Don’t Frack Maryland has comprehensive information about the fracking fight and resources for taking action. Food and Water Watch offers tools for learning about, and taking action against, fracking at the local level.