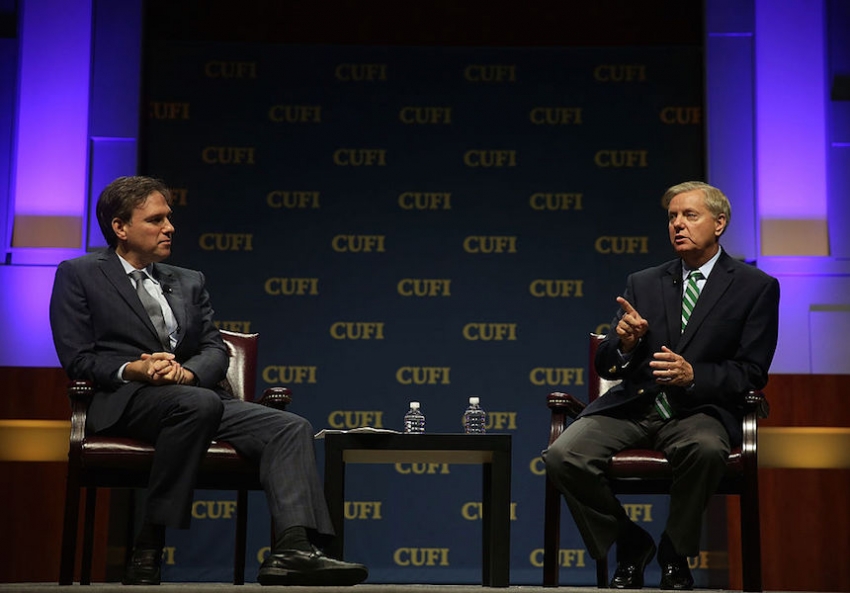 One of the people in this photo denies climate science. The other is Lindsay Graham. (Alex Wong/Getty Images)

Why the Hell Did the New York Times Just Hire a Climate Denier?

False equivalence has been a fatal flaw in much mainstream climate coverage.

Bret Stephens, currently the Wall Street Journal’s deputy editorial page editor, has won a Pulitzer Prize. He has also written multiple pieces casting doubt on what in 2014 he called “the purported threat of global warming.” In 2010, following a hyped-up pseudo-controversy over a climate researcher’s emails, he cheerfully announced that the “secular panic” of “global warming is dead, nailed into its coffin one devastating disclosure, defection and re-evaluation at a time.”

“Herewith, then, I propose a readers' contest to invent the next panic,” he urged. “It must involve something ubiquitous, invisible to the naked eye and preferably mass-produced.”

To be fair, the New York Times opinion page could use a few fresh voices. And while it may have been nice not to go with yet another Gen X, middle-aged and/or old white man, contrarian (read: conservative) views do have a place in the national debate.

But whether climate change exists is no longer a debate. False equivalence has been a fatal flaw in much mainstream climate coverage: Offering equal space to two sides of a controversy that doesn’t exist, and has been fueled to the tune of hundreds of millions of dollars by fossil fuel-funded disinformation campaigns.

On the Times’ own op-ed page in 2014, climate scientist Michael Mann described how this “virulent strain of anti-science infects the halls of Congress, the pages of leading newspapers and what we see on TV.” Tonight, Mann tweeted at the Times, suggesting they make Stephens read his column.

Thanks to this industry-funded anti-science infection, “Politicians, economists, journalists and others may have the impression of confusion, disagreement or discord among climate scientists,” science historian Naomi Orestes writes. But after analyzing the abstracts of 928 (928!) peer-reviewed articles about climate change in scientific journals, she determined, “that impression is incorrect.”

So when an international panel of leading experts concludes that “continued emission of greenhouse gases will cause further warming and … increas[e] the likelihood of severe, pervasive and irreversible impacts for people and ecosystems,” they mean it.

We have an administration whose official position—by all accounts—is to deny that climate change exists, and prop up the industries trying to exacerbate it. To bring up the obvious: EPA administrator Scott Pruitt has sued the agency he now runs 13 times, and a longtime ExxonMobil CEO is now running the State Department (arguably, into the ground).

If the New York Times wants to hire a conservative, so be it. But the paper of record shouldn’t spread the administration’s lies for it.