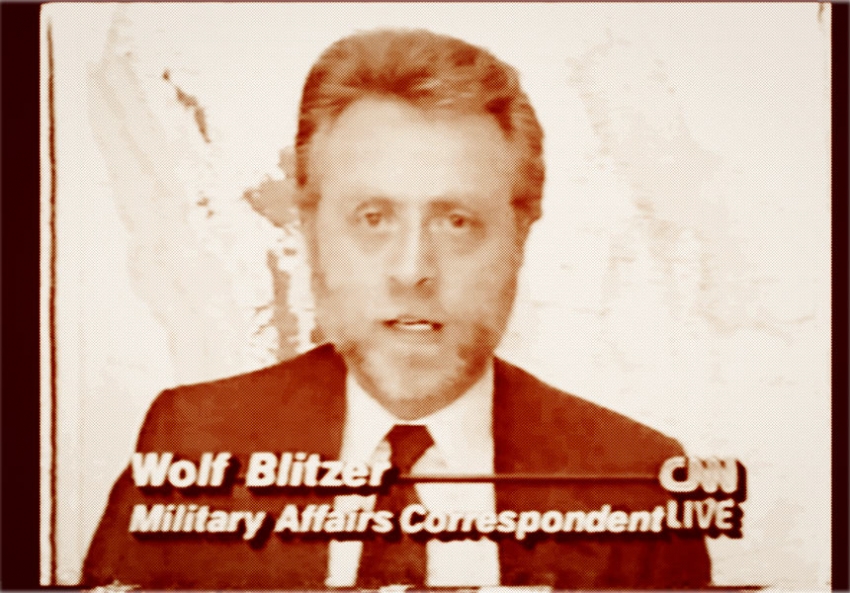 Since Operation Desert Storm, CNN’s Wolf Blitzer has been a cheerleader for war.

What is good for CNN is often bad for the nation.

When Fareed Zakaria, who famously declared that Trump won the presidency by “bullshitting,” went off the rails on CNN and asserted that our ignoramus-in-chief, by bombing airfields in Syria, had finally become “president of the United States,” we were reminded of an important axiom we might have temporarily forgotten: What is good for CNN is often bad for the nation. (And god knows what mushrooms MSNBC’s Brian Williams had ingested when he gushed over the “beautiful pictures” of our “fearsome armaments” and uttered the instantly cringe-worthy statement, “I am tempted to quote the great Leonard Cohen: ‘I am guided by the beauty of our weapons.’ ”) But it is CNN that millions go to initially when we invade or bomb another country. Which is why it’s time to question their decades-long comfort zone: war coverage.

Baked into CNN’s DNA since the 1980s are the following ratings boosters: a fascination with the visuality of war, a voracious appetite for scandal (think Anna Nicole Smith, whose 2007 death the network covered incessantly), and a love of political theater, which, with Trump in the limelight, has dire consequences.

To be sure, CNN does have some newly energized reporters like Jake Tapper, who seems to be on a mission to expose the daily doses of Trumpian bullshit, incompetence and corruption. People’s horror at Trump’s growing slagheap of outrages has bolstered CNN’s post-election ratings (although MSNBC has been beating them in recent months). But chalk that up as penance. Let’s not forget for one minute how much CNN, in its quest for ratings, gave Trump nearly wall-to-wall free media during the election season. As Jonathan Mahler noted in his New York Times analysis of the symbiotic relationship between CNN head Jeff Zucker and Trump, “It’s hard to imagine that either Trump or Zucker would be where he is today without the other.”

Trump may be the cash cow of the moment, but over the decades it has been wars—specifically, U.S. military invasions—that have fed the network’s fortunes. It’s not that CNN is filled with warmongers. There’s simply a built-in, structural bias at a network whose fortunes rise when war breaks out and viewers tune in. Writing about Operation Desert Storm in 1991 for The Progressive, I was stunned to see the fetishizing of U.S. weaponry, including baseball card-style descriptions of the different kinds of warcraft, and how the network’s aerial footage of Baghdad sought to put viewers in the cockpit, as if we were dropping the bombs ourselves.

Desert Storm was a ratings bonanza, with a record 10.8 million households tuning in to watch the initial bombardment of Baghdad. Then, with the run-up to the 2003 invasion of Iraq, we got an hourly countdown to the deadline Bush had given Saddam Hussein to get out of the country. Once the invasion began, CNN morphed from advance team to cheerleading squad, showcasing the pyrotechnics of “shock and awe” while Wolf Blitzer marveled that “as many as 3,000 Tomahawk missiles, satellite-guided precision bombs, laser-guided bombs” would be launched. Reporter Walter Rodgers enthused about the “wonderful vignettes” of Bedouins in their tents no doubt “dumbfounded” and “awestruck” at the sight of the mechanized units rolling along. “All of a sudden they’re seeing camels like nothing they ever saw before with 120-millimeter guns stickin’ out,” chuckled Rodgers.

The anti-war movement, barely covered at the time, warned about the immorality and folly of the Iraq War and has been tragically proven correct. The aftermath, whose wages we are still reaping, has been disastrous. Now, with an unpredictable, unstable and uninformed president prone to aggression and revenge, CNN, which already has much to atone for, confronts a choice between its decades-long war-mance (and the militaristic outlook that goes with it) and tough-minded, anti-jingoist reporting.

Of course, when the U.S. is involved in any military engagement, a worried and scared public wants information. But especially now, we need probing critiques of knee-jerk, macho gambits, not celebrations of what is often a lethal—and bogus—connection between alleged presidential leadership and an eagerness to strut and deploy weapons of mass destruction.