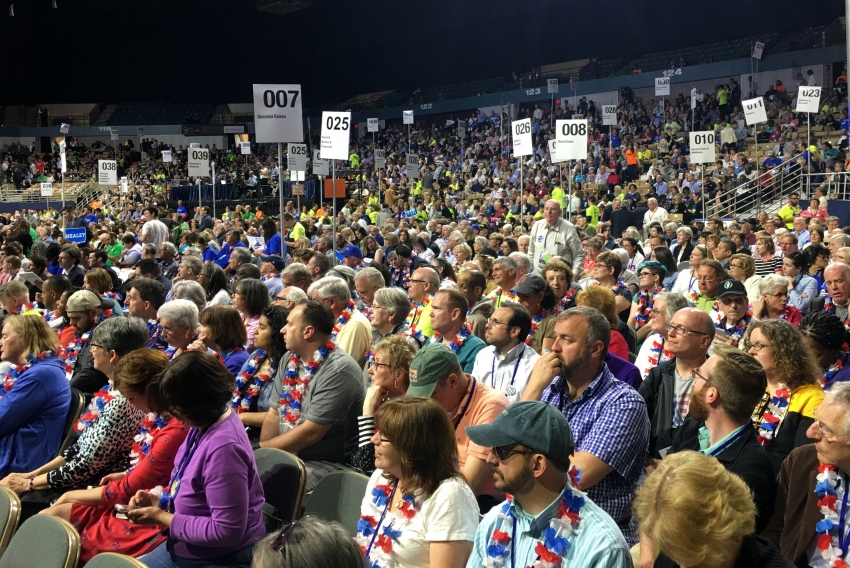 'It’s a great opportunity, but it’s also a great challenge. Certainly the momentum is strong. I don’t see it fading. But we need concrete steps to push it forward.'

At the Massachusetts Democratic convention over the weekend, the normally sober event had an unruly and raucous vibe. It took some strange twists.

Eventually, the journey resulted in a platform that is among the most progressive ever passed by a state party. It’s likely the most progressive platform by a major party in the nation's history, period. It calls for single-payer healthcare, a $15 minimum wage, paid family leave, forgiveness of student loan debt, a ranked-choice voting system, an independent commission to draw the state’s congressional districts, the abolition of Massachusetts superdelegates, an end to for-profit prisons, a carbon tax, more accountability for police officers who use excessive force, and more.

But getting there was a long, tortured process. It began early this year, when activists with the Massachusetts chapter of Our Revolution (OR)—the organization that emerged from Bernie Sanders’ presidential campaign—began organizing people to take part in the process by becoming delegates.

There were about 750 delegates organized by OR at the convention, out of more than 4,500 registered delegates. In April and May, many of them attended meetings devoted to drafting the party’s platform. In part because of that work, the platform draft called for single-payer healthcare and a $15 minimum wage.

But OR and other progressive delegates wanted it to go much further, and they pressed their agenda through amendments to the platform at the convention. That’s why, early Saturday morning, activists presented a stack of petitions—calling for votes on their proposed amendments—to party officials. They delivered them by wheeling a stack of documents, several feet tall, on a bellhop's luggage cart through a series of hallways and “about eight freight elevators,” says Andrew Shelton, a delegate and member of Young Democratic Socialists. “Then we showed up at the desk, and people had no idea what we were doing. Because it had never been done before.”

The vote on the platform is usually a formality and inspires little debate. The work is done behind the scenes, at the pre-convention platform sessions. But progressives were ready and eager for a vigorous airing of differences. That clash came to a head when a series of speeches by party officials and politicians stretched on for hours. At about the four-hour mark, the OR contingent revolted and began drowning out the speakers with chants of “Vote! Vote!”

In the end, progressives got most of what they sought from the process, though they narrowly lost a vote on an amendment that called for an end to the statewide ban on local rent-control measures. And, after much contentious back and forth, the convention chair ruled that two proposals, relating to foreign policy and peace in the Middle East, were out of order, on the basis that the state party doesn’t take a stance on federal-level policy questions.

A proposal designed to make Democratic candidates more accountable to the platform was also ruled out of order. It would have given priority, in distributing party resources, to candidates who support a majority of the party’s official positions.

The final proposal summed up OR’s frustration with Democrats who know the words to say, especially when talking to progressives, but lack the courage of their professed convictions. At the convention, for example, “the rhetoric from all the speakers was pretty left-wing,” says Rand Wilson, a labor organizer for SEIU Local 888 and member of OR. “But there was no introspection. They don’t want to reflect on their own culpability in the lurch to the right, and how that evolved from the austerity agenda and the neoliberal consensus from Democrats and Republicans alike.”

Progressives viewed the party’s maneuvering on Saturday—notably, the four-plus hours of speechifying before the voting began—as a transparent attempt to sap the energy of the insurgency. Wilson says it felt like the party regulars were confident they could filibuster the challenge from the left, because it would likely be fleeting.

That reluctance to embrace or even engage much with dissent was “a matter of people being set in their ways and not taking advantage of a great opportunity to build the party,” says Shelton, who viewed the convention as “an opportunity to meet people, build bridges, advocate for my ideas, and speak up for what I believe in. People were motivated in a way that I don’t think would have happened a year ago.”

It’s an open question whether the leftist turn in the party’s 2017 platform is the end of the matter, or just an opening salvo. As Matt Miller—a lead organizer for OR Massachusetts, and a member of Democratic Socialists of America—notes, “One of the key goals was to have a big, progressive show of force, so that the establishment and the more conservative Democrats, primarily in our statehouse, see that we are active and we are not a joke. And we definitely achieved that.”

Translating that success into an effective ballot-box strategy will be the test of the movement’s long-term power. Achieving a more progressive platform was all well and good, Shelton says, but “now it’s a matter of figuring out ways to get people who will represent those values into office. Ten years from now, I hope we’re not going to be talking about Bernie Sanders. I hope we’ll be talking about the 10,000 people who ran for office [based on his values] and are sitting on city councils and in state assemblies.

“I really hope that an electoral, campaign-based strategy comes out of it, to solidify this momentum. It’s a great opportunity, but it’s also a great challenge. Certainly the momentum is strong. I don’t see it fading. But we need concrete steps to push it forward.”