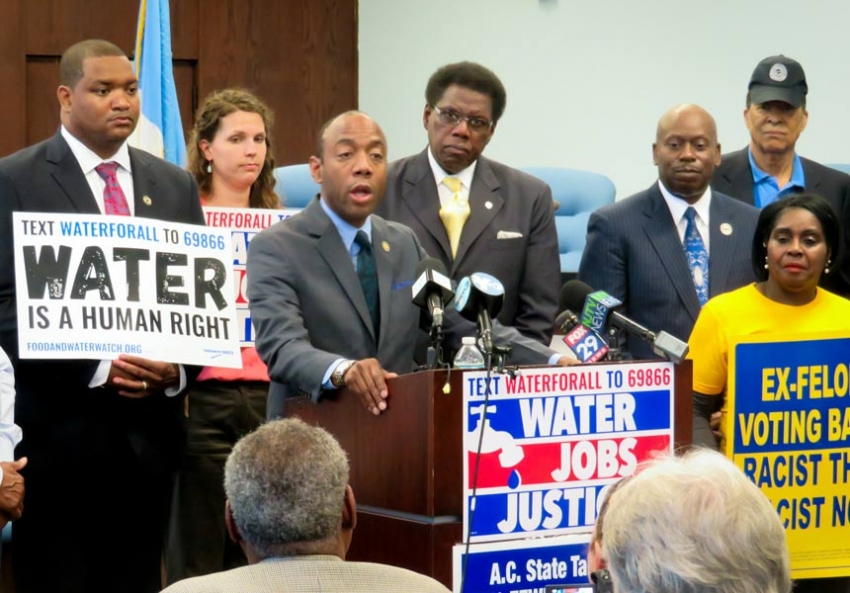 NAACP president and CEO Cornell Brooks came to Atlantic City April 20 for the launch of a campaign to keep the city’s water system public. (Courtesy of Food and Water Watch)

Cost-cutting reforms to Flint, Michigan’s water system led to a humanitarian crisis, one that is still exposing the city’s disproportionately black and poor population to dangerous amounts of lead. But austerity-minded politicians remain undeterred. In New Jersey, Gov. Chris Christie and a bevy of state-appointed officials are now moving to privatize Atlantic City’s water utility.

City residents aren’t taking this without a fight. Eager to keep their water public, a group of residents—joined by 40 statewide and national organizations—have formed a coalition called AC Citizens Against the State Takeover to keep Christie’s cronies at bay.

Policymakers point to years of declining tax revenue to justify their push to privatize the Municipal Utilities Authority (MUA), which provides water for Atlantic City’s 40,000 residents. Since 2010, the city’s tax base has dropped from $20 billion to less than $7 billion, thanks in large part to the five casinos that have closed since 2014. (Relaxed gambling laws in neighboring states have rendered South Jersey less of a destination.)

To make matters worse, casino owners are suing the city for millions, claiming their properties were taxed based on outdated valuations. In an early such lawsuit, Donald Trump won a $5.9 million tax refund in 1994.

In response to the city’s dire financial situation—already, Atlantic City sits in $500 million of debt—the state government passed the Municipal Stabilization and Recovery Act in May 2016, requiring city officials to create a debt-reduction plan. The Christie administration rejected this plan in November, allowing the governor to install his own appointees with the authority to break union contracts and sell off public assets, charged with getting the city’s fiscal house in order.

The administration appointed Jeffrey Chiesa, Christie’s former attorney general, to lead the takeover efforts, a hiring that blurs the line between political appointments and private contractors. As of mid-May, Chiesa’s law firm had billed the state $1.2 million for less than half a year of work. Ronald Israel, who charges $350 an hour as a partner at the firm, billed the state $35 for a six-minute conference call. Defending his firm’s recommendation to lay off 100 of the city’s firefighters, Israel told the Press of Atlantic City, “If we don’t have everyone sacrificing, we’re going to be Detroit.”

Already Christie’s appointees have begun to tamper: Following a tense debate in late April, the City Council tabled a vote on whether to privatize trash collection services. Before they could revisit the issue, however, the state made the decision for them, unilaterally handing a three-year, $7.2 million contract over to a private contractor.

With the MUA, the stakes are even higher. Atlantic City now has clean, drinkable tap water. But resident and activist Charles Goodman warns, “If a private company comes in, that which happened in Flint could happen here.”

Another concern for residents is cost. Atlantic City residents pay far less for water than their neighbors in adjacent towns. A recent study from Food & Water Watch found that New Jersey residents who get their water through private utilities pay an average of $230 more per year than those with public utilities. That’s a big part of why Atlantic City residents like Goodman tend to oppose selling the MUA off to the highest bidder—and why the City Council hasn’t done it already.

Goodman cut his teeth in activism during the civil rights movement—sitting in as a high schooler to fight racist hiring practices at Atlantic City’s businesses—and is now heavily involved with the city’s NAACP, one of the groups spearheading anti-privatization efforts. He traveled to Trenton last spring with the chapter to advocate against the state’s takeover, speaking at public hearings he feels were more show than substance. “The initial fight was to let people in Trenton know you can’t come over here and roll over us,” he says.

In New Jersey’s gubernatorial race, the Democratic front-runners have come out strongly against the takeover. Still, public sentiment alone won’t stop the water companies. According to Zach Corrigan, senior attorney at Food & Water Watch, water companies see the utility as a gold mine. “When you have a city that’s in financial distress, the utility [is] treated as if it’s a fire sale,” he says. “Whoever bids … is able to get a really cheap deal out of fear that the city is going out of business.”

To prevent that, AC Citizens Against the State Takeover is collecting signatures to get two initiatives on the November ballot that would require a public referendum before any move to privatize the water system. To get there, they’ve held weekly conference calls with residents since October 2016, and in March began hosting door-to-door canvassing drives every weekend.

No small part of the fight, Goodman says, is educating residents about what’s actually happening. The state’s decision-making is shrouded in secrecy, with Chiesa and his team issuing few dispatches to the press. And, after a moratorium on privatization expired in May, an initial decision on the MUA’s sale could come any day. “This is not the actions of a state that wants to have lots of public input,” Corrigan says.

Ultimately, whether it’s casino magnates dodging taxes or unelected officials privatizing utilities, it’s everyday residents—predominantly working-class people of color—who bear the cost of austerity. As Goodman puts it, “That money has to come from somewhere.”