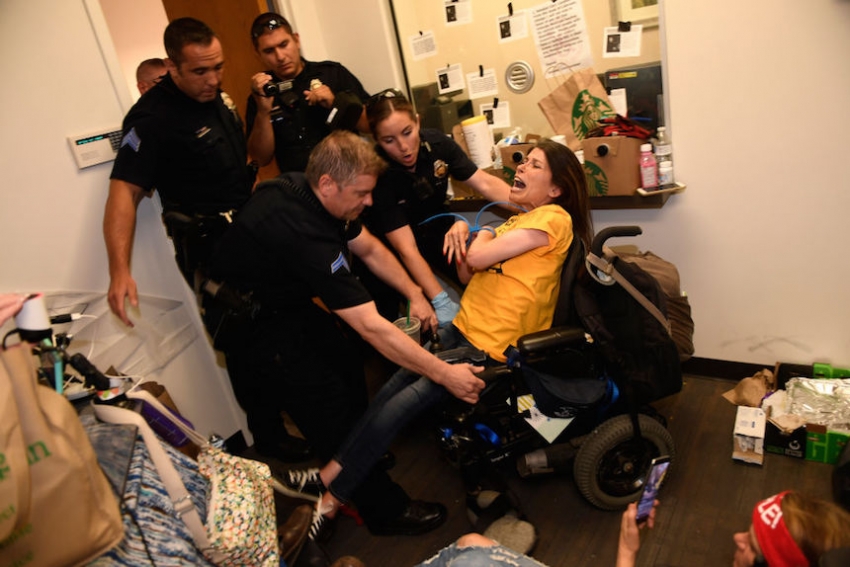 Dawn Russell gets arrested by Denver police officers after refusing to vacate the offices of Sen. Cory Gardner on June 29 in Denver. (Helen H. Richardson/The Denver Post via Getty Images)

This wasn’t their first day at the rodeo.

For ADAPT activist Carrien Ann Lucas, this form of protest taps into a long and deep tradition. “We are persistent, and we were going to persist,” she says.

DENVER—At 7 p.m. on June 29, Republican Sen. Cory Gardner’s office resembles a middle-school sleepover, blankets and snacks scattered across the floor. Only the jaunty flag dangling from the wall exposes the scene for what it really is. “Our Homes, Not Nursing Homes,” it reads. Disability-rights activists with ADAPT are worried the GOP’s proposed cuts to Medicaid could force them into institutions by slashing support for home- and community-based services. This is a sit-in.

After nearly 60 hours, a phalanx of police officers appears in the doorway, zip ties in hand. The disability rights activists on the floor begin to chant: “Rather go to jail than die without Medicaid.”

Moments later, a slow procession out of the office begins, police awkwardly maneuvering wheelchairs. Cameras crowd around, broadcasting images around the world.

The national media started paying attention to the disability rights group ADAPT in June, when chapters organized protests at offices of GOP senators across the country, from Alaska to Ohio to Florida. But this is not ADAPT’s first rodeo. It is more like another day at the office.

When ADAPT activist Carrie Ann Lucas declined to assist Denver officers with the operation of her wheelchair, she was arrested and charged with interference with police. She was quickly released, however, because sheriff’s department personnel were worried about handling her ventilator. “I feel a little bit discriminated against,” she tells In These Times, “that I didn’t get to enjoy the fine accommodations of the sheriff’s department with everyone else.” For Lucas, this form of protest taps into a long and deep tradition. “We are persistent, and we were going to persist,” she says.

Fittingly, ADAPT’s work started in Denver, in 1978, when the group, then called Atlantis, blocked city buses to demand accessible transit. Nine years after Atlantis roared onto the scene, another group of loud, rowdy activists arose: the AIDS Coalition to Unleash Power, aka ACT UP. Both groups laid their bodies on the line to stress the life-and-death stakes of healthcare policy. ADAPT made global headlines in 1990 when disabled people crawled up the steps of the Capitol Building to fight for the Americans with Disabilities Act; in 1992, ACT UP members swarmed the White House lawn to dump ashes of deceased loved ones, saying, “If you won’t come to the funeral, we’ll bring the funeral to you.”

Members of both organizations are well aware of the power of shock value, knowing that a picture of a wheelchair user raising her fists in the air as she’s lifted into a police van, or an HIV activist chained to a fence, makes for a compelling call to action. Over the decades, the groups have shut down the White House, closed government buildings and infuriated a lot of people in power.

After ACT UP activists disrupted the New York Stock Exchange in 1989, drugmaker Burroughs-Wellcome slashed the price of AZT, an early HIV/AIDS medication. This July, just weeks after ADAPT activists stormed congressional offices across the country, Senate Majority Leader Mitch McConnell announced that he was pulling the Senate’s attempt at a bill because of a growing list of Republican defectors. One of the tipping points? Sen. Jerry Moran, whom Kansas ADAPT targeted.

Though Republicans suffered another defeat in a small-hours vote on July 28, ADAPT activists aren't resting. They're already gearing up for the next healthcare fight, just like the Republicans who are bound and determined to repeal the ACA and slash Medicaid. According to disabled attorney and advocate Robyn Powell, Medicaid cuts could also curtail access to medications, therapies, specialists and regular care. For some, such cuts would be fatal. To call back ACT UP’s famous slogan: Silence equals death.