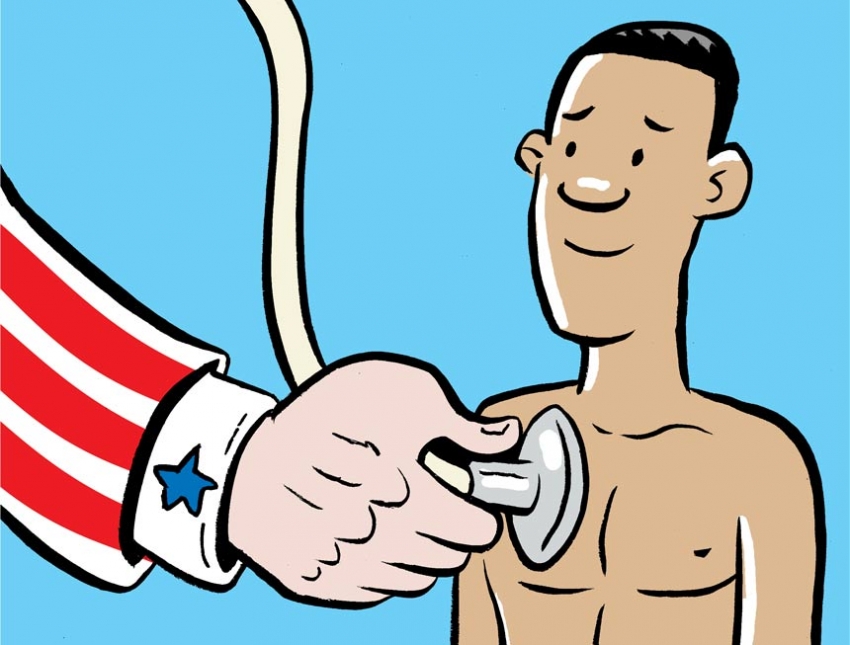 Single-Payer Healthcare In 5 Minutes Or Less

Everyone is getting behind this prescription for a better healthcare system. But what is it exactly?

1. A healthcare system in which a sole insurance provider—for us, Uncle Sam—covers all citizens.

2. One of the more dependable spaces in “Bernie Sanders Speech Bingo.”

“Most of the health economists I know would love to see single payer—Medicare for all.” —New York Times columnist Paul Krugman, who nonetheless opposes single payer because he considers it “too heavy a [political] lift”

Why Would We Want This?

Our current system of private, for-profit insurance and its elaborate architecture of premiums and co-pays leaves 28 million uninsured, which could go up if Obamacare is repealed. Plus, many of those with insurance still can’t afford the care they need. With the GOP threatening to kick another 20-some million off by repealing Obamacare, more and more people are embracing the radical notion that maybe poor people shouldn’t die just so corporate stockholders can make a few extra bucks. Progressives in Congress have been proposing single payer for decades, and Sanders is expected to put forward a new bill shortly. This time, thanks to constituent pressure, even some mainstream Dems are starting to fall in line.

But That Could Never Work

What Are We Waiting For?

Those holding their breath for Trump to sign Bernie’s healthcare bill have long since suffocated, but there’s room for cautious hope in the states. California came close in June, when a single-payer bill spearheaded by the nurses union passed the state Senate before being shelved in the Assembly. Some progressives worry that a state-level single-payer policy could be less financially stable than a national one, but others see it as an achievable first step. After all, Canadian single payer started in a single province.

Nationally, there's energy behind an “Expanded and Improved Medicare-for-All” bill, lowering the qualifying age for Medicare from 65 to 0. It would also eliminate cost-sharing and cover a wider variety of care, taking a step toward the more ambitious goal of fully socialized medical service, where all facets of health provision—hospitals, dentist visits, pharmaceuticals and, hell, even veterinary care—are detached from the whims of the market and distributed freely and equally in the public sphere.

This is part of “The Big Idea,” a monthly series offering brief introductions to progressive theories, policies, tools and strategies that can help us envision a world beyond capitalism. Since this writing, Sanders has introduced a new bill in the Senate with several other Democratic co-sponsors—for more on the current momentum behind single-payer healthcare, read “Single Payer Is On the National Agenda—And It's Thanks to People's Movements” by Ben Palmquist.