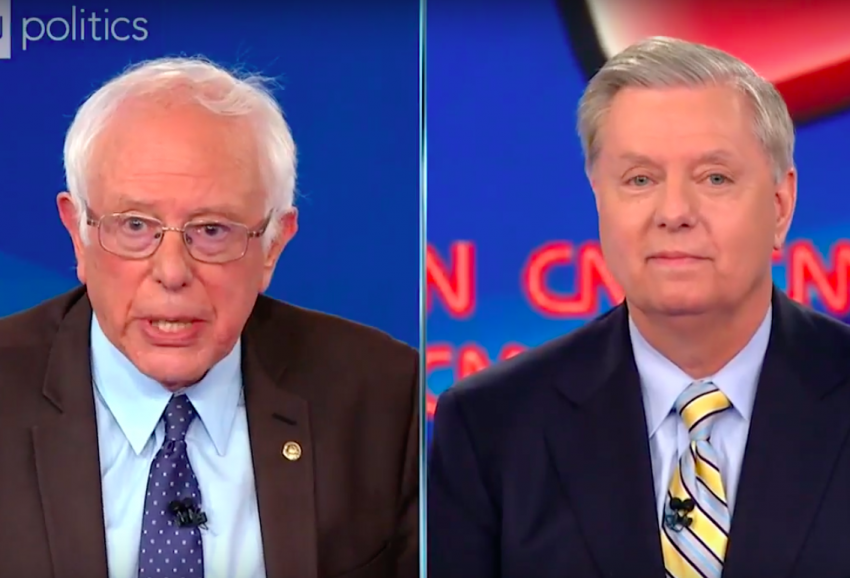 The Movement for Single Payer Has Transformed the Healthcare Fight. The CNN Debate Was Proof.

During CNN’s Monday night debate about the Affordable Care Act, it became clear that progressives have set the terms of discussion.

It’s impossible to talk about universal coverage without talking about the power and corrupting influence of corporations.

The grassroots fight for single payer, championed by Bernie Sanders, has thoroughly reframed the healthcare debate over the past year.

That became clear during CNN’s Monday night healthcare debate between Sens. Lindsey Graham (R-S.C.), Bill Cassidy (R-La.), Bernie Sanders (I-Vt.) and Amy Klobuchar (D-Minn.). The debate came as Republicans labor, Sisyphus-like, to “repeal and replace” the Affordable Care Act (ACA). Graham said in his opening remarks that the debate was about “who we want to be as a nation.” Cassidy said that it was about who has power.

Sanders, who dutifully defended the ACA on Monday but made it clear that his ultimate goal is a single-payer system, agrees with Graham and Cassidy that the healthcare debate isn’t really about healthcare. As he said to a Vox interviewer recently, “what this struggle is about really, honestly, is not a healthcare debate.”

What is it about then? Well, it’s about power. And it’s about who we want to be as a nation. Just like Graham and Cassidy said. In other words, the healthcare debate centers around the big-picture questions of our moral responsibilities to one another—and our distribution of resources within U.S. society.

It’s impossible to talk about single payer without talking about the inequalities of the current system, and the fact that 28 million people are still uninsured. Sanders does that all the time. He did so again Monday. But so did Graham and Cassidy. The Republicans’ point was just that the ACA’s failures had priced too many people out of the market, and state-based programs are a better path to truly universal coverage.

It’s impossible to talk about universal coverage without talking about the power and corrupting influence of corporations. Such talk is expected from Sanders. But it was a Republican, Graham, who said Monday that “the biggest winner under Obamacare is insurance companies, not patients.” It was Cassidy who said that the ACA is a huge giveaway to the pharmaceutical companies, the hospital sector, the health insurance industry—everyone but the American people.

Whether they actually believe these things doesn’t matter. What matters is that Republicans were talking about healthcare using a progressive framework that focuses on power and inequality. This moment, in some ways, is an inverse of what we saw in the 1980s, during the early stages of the neoliberal ascendancy, when Ronald Reagan and the GOP framed their push for tax cuts and deregulation as a matter of individual “freedom.” That framing still pervades our political discourse. You might wholly reject the neoliberal notion of freedom. But you can’t escape it.

That’s what single payer is doing for the progressive movement, for some elements of the Democratic Party, and for our political discourse generally. As with the GOP’s push for tax cuts, the progressive healthcare push forces people across the political spectrum to engage questions about “who we want to be as a nation.” It puts power and inequality front and center in a way that few other issues have the power to do. It reframes the debate.

Earlier this month, Sanders introduced a “Medicare-for-all” bill in the Senate. It has subsequently gained support from at least 21 Democratic senators, including several of the party’s potential presidential contenders in 2020, like Sen. Kamala Harris, of California, and Sen. Kirsten Gillibrand, of New York. A similar single-payer bill in the House has 119 supporters. Neither bill has any chance of immediate success, in strictly legislative terms.

In broadly political terms, however, the slow-building wave of support for these bills has the potential to be momentous. Transformative philosophy needs the engine of actual policy. Single payer, like the Right’s obsession with tax cutting and deregulating, is both a vision of how things should be and a plan to get there.

“This fight,” Graham said on Monday, “it’s just beginning.” He meant the fight to repeal and replace the ACA specifically. But the evidence from Monday evening suggests that there is a bigger fight brewing, with terms set by left and progressive forces. And it may well be more than Graham, Cassidy, and the GOP had bargained for.