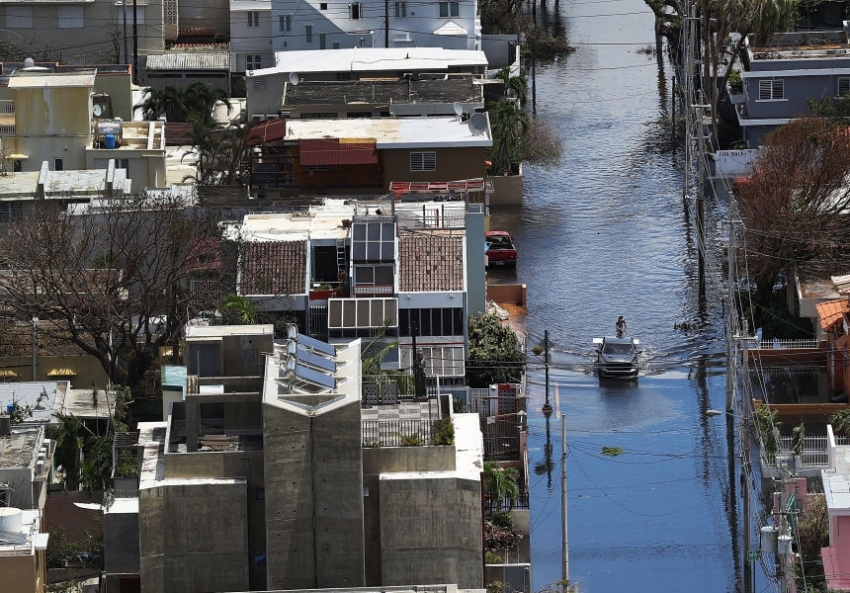 A flooded street in San Juan, Puerto Rico. Almost all residents of the island are still without power or cell service. (Joe Raedle/Getty Images)

Puerto Rico Is a Symptom of America’s Rotting Democracy

We need to rebuild the island and our government.

We need to relinquish the notion that good government is ours by birthright and realize that democracy must be fought for, every day.

Ferocious hurricanes and other climate-fueled disasters are nature’s stress tests. They expose faulty infrastructure and systemic inequalities, to say nothing of incompetent leadership. With payments on its massive debt to Wall Street long prioritized over safe electricity, Puerto Rico’s archaic power grid was already prone to blink out in a windstorm. Then Maria hit. Help has been grudging; President Trump took eight days just to waive shipping restrictions.

Social media is full of reminders that “Puerto Rico is America.” That’s true in more ways than one. More than any other part of neglected and disinvested America, Puerto Rico is a harbinger of the country's future.

Municipal debts have imposed similar austerity regimes around the country, at the expense of our school systems, municipal sewage districts and rural hospitals.

In the middle of a September heat wave, many Detroit public schools closed for lack of air conditioning. Detroit, like Puerto Rico, was ravaged by decades of federal disinvestment. Then financial firms swooped in, after a market crash they caused, to exploit and exacerbate municipal debt. Is it any wonder neither place can stand up to extreme weather?

Other forms of government neglect can seemingly go unnoticed indefinitely, until the next disaster. Through something called “regulatory capture,” many government systems created to protect health and safety are full of rot. Corporations infiltrate government agencies with the intention of shaping policies that end up channeling funds into their own coffers, at the expense of public welfare.

Take chemical regulation. Valerie Brown and Elizabeth Grossman report that Monsanto has corrupted the EPA’s evaluations of the weed killer glyphosate, trade name Roundup, since 1973. “It’s been on the market for 40 years,” a Monsanto flack told me heatedly over the phone when asked for comment. “We’d know if there was a problem!” If the company and its army of paid researchers have deemed glyphosate safe, it surely must be so—never mind flaws in the research repeatedly pointed out by EPA scientists. In fact, we don’t know how glyphosate—128,000 tons of which are sprayed on U.S. crops each year, and which is present in everything from Doritos to Cheerios—affects humans. Without more independent, peer-reviewed, publicly available studies, we may never know. The EPA, underfunded and highly incentivized to use Monsanto’s convenient research briefings, may never insist on finding out.

We need to relinquish the notion that good government is ours by birthright and realize that democracy must be fought for, every day.

As Naomi Klein notes in The Shock Doctrine, natural disasters offer an opportunity to create a society from scratch, to whoever can seize it. After Katrina, neoliberals privatized New Orleans’ school system. In depopulated Detroit, progressives are experimenting with mutual aid and non-capitalist economies.

In Houston, a tug-of-war is already underway. Former Shell CEO Marvin Odum has been appointed to lead Hurricane Harvey recovery; at the same time, Ella Baker-inspired volunteers are offering direct aid to the storm-battered and government-neglected northeast Houston, vowing to rebuild the area “better than before.”

We must assist in the progressive rebuilding of both Puerto Rico and Texas. We can also apply the same logic to the more insidious weakening of our social structures. As the hurricane-force ego of Donald Trump meets the rot of our governmental institutions, what will it take for us to both resist and rebuild? What institutions do we need as we roll up our sleeves and begin? A truly democratic Democratic Party and insistent grassroots movements, to name two.