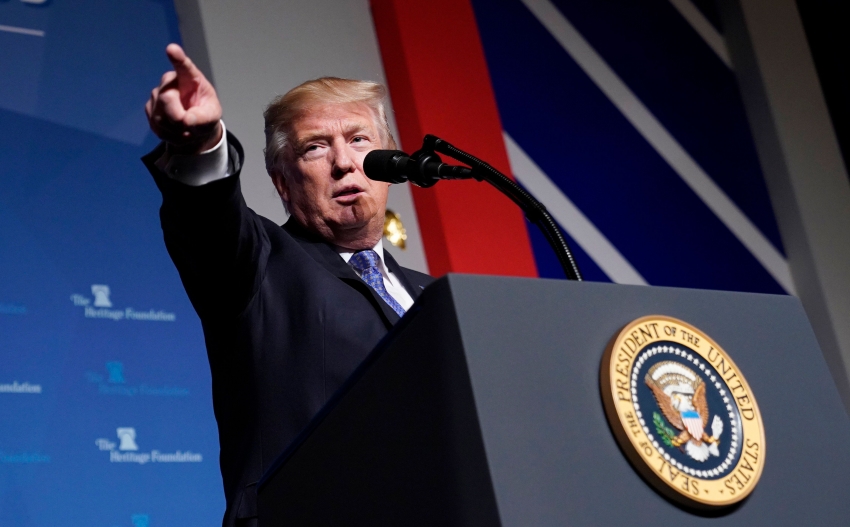 Trump Plans to Make It Easier to Kill Civilians with Drones. We Can Thank Obama for Paving the Way.

As the war on terror enters its 17th year, it’s clear that abuses of power by one administration lead to abuses by the next.

Trump may be driving it more recklessly, but he's still operating a machine the Obama administration built.

This article was produced by a partnership between In These Times and Foreign Policy in Focus.

Barely a month after President Donald Trump announced plans to deepen and extend the now 16-year-old U.S. war in Afghanistan, reports surfaced of plans to expand another signature Obama-era policy: the drone war.

Specifically, The New York Times reported in late September that the administration is relaxing Obama-era restrictions on who can be targeted and removing a requirement that strikes receive high-level vetting before they're carried out. According to the paper, the new rules would also “ease the way to expanding such gray-zone acts of sporadic warfare” into new countries, expanding the program's already global footprint.

In addition to increasing the pace of these operations, the Trump administration has also loosened guidelines designed to protect civilians in areas like Yemen and Somalia, and overseen a notable increase in civilian casualties in war zones like Iraq and Syria.

The controversy over drones during the Obama administration reached an early flashpoint in 2011, when a drone pilot assassinated a U.S. citizen in Yemen by the name of Anwar Al-Awlaki — followed, two weeks later, by the U.S. killing of his 16-year-old son.

It was another two years before Obama's Department of Justice released a white paper that detailed its legal argument sanctioning Al-Awlaki’s murder. As the ACLU's Jameel Jaffer explained, the paper said the government would only target “imminent” threats, and only when “capture was infeasible.” But in practice, Jaffer noted, the administration used an extremely expansive definition of “imminent” that “deprives the word of its ordinary meaning.”

“Without saying so explicitly,” Jaffer worried, the government was effectively claiming “the authority to kill American terrorism suspects in secret,” virtually anywhere in the world.

That same year, responding to increasing criticism, Obama himself gave a speech attempting to clarify the boundaries of this particular tactic. “America’s actions are legal,” the president asserted of the drone war, which he claimed was being “waged proportionally, in last resort, and in self-defense.”

So it was perfectly legal, in the Obama administration's view, to launch 10 times more strikes than the Bush administration, according to the Bureau of Investigative Journalism, in a vast arc extending from Libya to the Philippines.

But if the war on terror has taught us anything, it's that legality is malleable — and never transparent. It’s taught us that accountability is impossible when the laws obscure the crime.

In his 2013 speech, for instance, Obama referenced a set of presidential policy guidelines on drone strikes. Yet these weren't released until August 2016, more than three years after Obama’s attempt at “transparency.” Two of those guidelines stated that there must be “near certainty” that a lawful target is present before a strike is approved, as well as a “near certainty that non-combatants will not be injured or killed.”

Yet it was never clear what this meant. “The [United States] has never described what post-strike standards, protocols, and mechanisms exist to systematically verify compliance with this policy standard,” Amnesty International noted in a critical 2013 report.

Indeed, the Obama administration seemed to take an expansive view of who counts as a “lawful target.” It embraced a practice of launching “signature strikes” where the targets were unknown altogether to the people who approved them. Such targeting was based on behaviors deemed to be indicative of terrorist activity, though what exactly that means was never clear either.

In fact, the White House apparently didn't designate many victims as “lawful targets” until after they'd been killed. “It in effect counts all military-age males in a strike zone as combatants,” the Times reported in 2012, “unless there is explicit intelligence posthumously proving them innocent.”

That’s why government estimates of civilian causalities have been routinely lower than counts by NGOs. For example, the U.S. government estimated civilian deaths at between 64 and 116 in Pakistan, Yemen, Somalia and Libya combined between January 2009 and December 2015. The Bureau of Investigative Journalism’s estimate was substantially higher — between 380 and 801, using relatively conservative criteria.

Worse still, there's been no accountability for the government officials responsible for civilian deaths. “[N]o such amends exist for civilians harmed by US drones in Pakistan,” the Center for Civilians in Conflict reported in 2012. And no one in Pakistan or Yemen had received “apologies, explanations or monetary payments as amends from the U.S. government.”

In other words, not only was the White House's commitment to avoiding civilian deaths a largely symbolic gesture, there was in fact no apparatus for justice at all. If legality is an assertion, and if breaches of the law have no consequences, what could ever make the drone war illegal?

These are a mere handful of the serious moral, ethical, and legal problems surrounding Obama's use of drones. They point to inconsistencies, performative justice and a wholesale lack of accountability — all of which characterized the modest restrictions Trump is now rolling back on the global killing program.

Across all administrations, the logic that maintains a seemingly insignificant line between legal and illegal tactics in the war on terror has a great deal to do with Islamophobia. The victims are all Muslims, or those racialized as Muslims, and are mostly out of sight and out of mind.

Most Americans don't see the violence and can't comprehend it — a fact that's abetted not only the escalation of drone warfare, but also the endless wars in the greater Middle East and the erosion of civil liberties at home under the war on terror more generally. And it's why Muslim victims have few prospects for accountability.

It is this system of oppression that ultimately underlies drone warfare, whether under Bush, Obama, or Trump. It's what allows the violence to escalate each year as the war on terror continues — and October 7 marked the start of its 17th year.

Human rights safeguards are meant to be absolute, not relative. Obama’s Democratic Party affiliation doesn’t make his drone warfare program any less illegal than Trump’s brutish brand of Republican politics. It was Obama's skirting of these standards, in fact, that enables Trump to be all the more brutal.

We must demand standards for the war on terror that are based on international human rights and humanitarian law. As Trump’s abuses become increasingly clear, let’s re-imagine what the protection and preservation of human rights looks like and work to ensure that it's our standard regardless of who's in power.