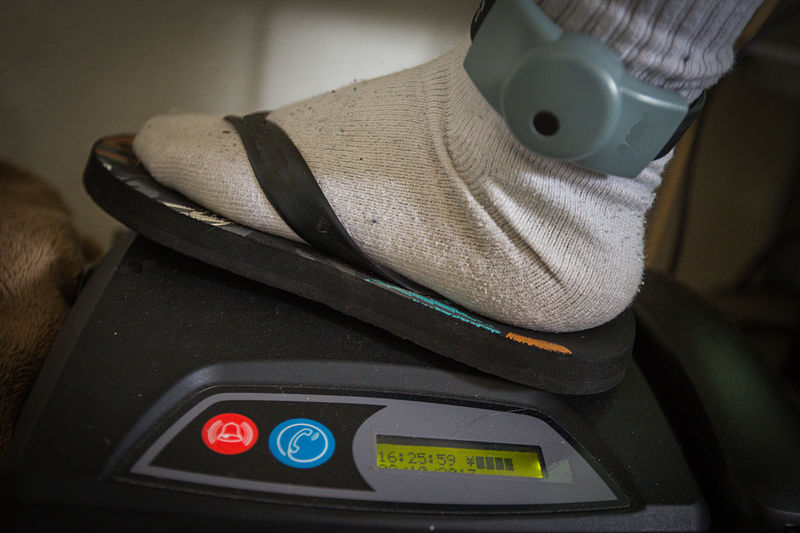 Electronic monitors are punitive measures that expand the impact of incarceration. (Ctruongngoc/Wikimedia)

Shackles Aren’t “Bracelets”: Why We Should Be Concerned About the Marketing of Punitive Technology

Ultimately, the pathway to ending mass incarceration is not devising new punitive technologies nor re-packaging current measures by pretending they are jewelry.

Courts, parole officers and sheriffs do not issue ankle bracelets. J-Lo wears ankle bracelets. Women in Egypt have worn gold and silver ankle bracelets for centuries. These accessories have little in common with the black boxes the criminal legal system straps on ankles as punishment. The most benign word we can use for them is “monitors.” Spanish-speaking immigrants have another term: “grilletes,” or shackles. Whatever you call them, they are devices of unfreedom—not decoration.

Why does this matter? The terms we use shape our understanding of people, technology and policy. Neutral or positive terminology dilutes the reality of punishment and deprivation. Hence, we have “correctional facilities” and “secure housing units,” rather than “internment camps” and “torture chambers.”

With the move toward decarceration gaining steam in many jurisdictions, shackles are gaining credence as a technological quick-fix. Many people in prison or jail jump at the chance to get out, regardless of the conditions. But once they get that “band” on their ankles, their perspective often changes. Johnny Page told In These Times he spent 23 years and nine months in prison in Illinois, only to be put on a grillete for 90 days.

He summed up his experience, explaining that “you don’t have to fight for the telephone, you don’t have to fight for the shower, but you’re still in jail.” Richard Stapleton, who headed up electronic monitoring in the Michigan Department of Corrections, appears to agree. He told In These Times that putting someone on parole with a monitor is just “another burdensome condition of extending their incarceration.”

The implications of grilletes go far beyond traditional incarceration. Increasingly, these devices have GPS capacity—giving them the ability to monitor a person’s every move in real time. But they can also be programmed to incorporate “exclusion zones,” places where a person cannot go without triggering an alarm or a re-arrest. Given that just 10 years ago, a majority of the population was still using flip phones, it is difficult to imagine where the technological capacity of phones and GPS is headed. What will it mean to be tracked in 2027?

Several possible dystopian scenarios emerge. The simplest is that we move hundreds of thousands of people out of prisons and jails into their houses, which become their new cells. This form of urban renewal recasts inner-city spaces as prisons beyond the walls, with families and individuals footing the bills for home incarceration and “monitoring service.” I call this e-carceration: the next step in the privatization of punishment.

But monitors are also surveillance devices, gathering data on people’s movements and storing it in a cloud somewhere. Most jurisdictions have few, if any, rules about how this information is stored, who has access to it or how long it is kept. In many German electronic monitoring programs, authorities delete all such information after two months.

In contrast, state contracts with electronic monitoring providers in Michigan and Florida require contractors to retain data for at least seven years. Through my years of research into electronic monitoring contracts, I determined that while state or local authorities usually own electronic monitoring tracking data, private companies typically maintain the databases. This gives rise to concerns about where this data may end up and if it could potentially be monetized.

The dystopian nightmare doesn’t stop there. As surveillance devices, grillettes can also enforce racialized, class-based zoning. We already have troubling historical precedent for racialized zoning, even without this technological capacity. Apartheid South Africa had a policy called influx control. Black people were issued a “passbook” which was like a domestic passport. For a Black person to enter a city, or even a certain section of the city, they needed to have a permit stamped in their passbook. Police were posted around the cities tasked with South Africa’s version of “stop and frisk,” asking Black people for their passbook. If they didn’t have a permit to be where they were, they went to jail.

With GPS, the state no longer needs passbooks or cops on the corner. Most of us already carry our passbooks with us in our cellphones. So, apart from e-carceration, we could even envision a form of e-gentrification, using technological tracking to keep certain people out of the rarefied areas designated for privileged consumers. While such scenarios are speculative, the example of South Africa shows that they are not outside the realm of possibility. The point is that we don’t know where this technology is headed, and we can’t trust the companies and politicians who are determining its direction.

So what is to be done? Throwing away our cellphones is unlikely to be the answer. Scrapping the term “ankle bracelet” for “grillette” or “shackle” is a start but hardly enough.

First, we need to legally recognize that putting someone on a monitor with house arrest is a deprivation of liberty—a form of incarceration. Anyone on a monitor should be getting credit for time served, whether it is in pre-trial release or as part of a sentence (In most of the jurisdictions I have examined throughout my years of research, this is not the case). And they should not be paying fees for it.

Second, we need to seriously regulate access to tracking information so that it does not become a vehicle to facilitate further punishment or restriction of movement.

Ultimately, the pathway to ending mass incarceration is not devising new punitive technologies nor re-packaging current measures by pretending they are jewelry. The pathway lies in taking hundreds of thousands of people out of cages, stemming the admission of new bodies and re-directing resources to individuals who are released from prison to their communities. They need access to opportunities, not “bracelets.”

James Kilgore is a formerly incarcerated activist and researcher based in Urbana, Illinois. He is the author of five books, including Understanding Mass Incarceration: A People’s Guide to the Key Civil Rights Struggle of Our Time. He is currently a Soros Justice Fellow whose work involves building a campaign, Challenging E-Carceration, which is focused on the issue of electronic monitoring. He can be reached at waazn1@gmail.com or @waazn1. He would like to thank Terri Barnes and Emmett Sanders for their work on this article.