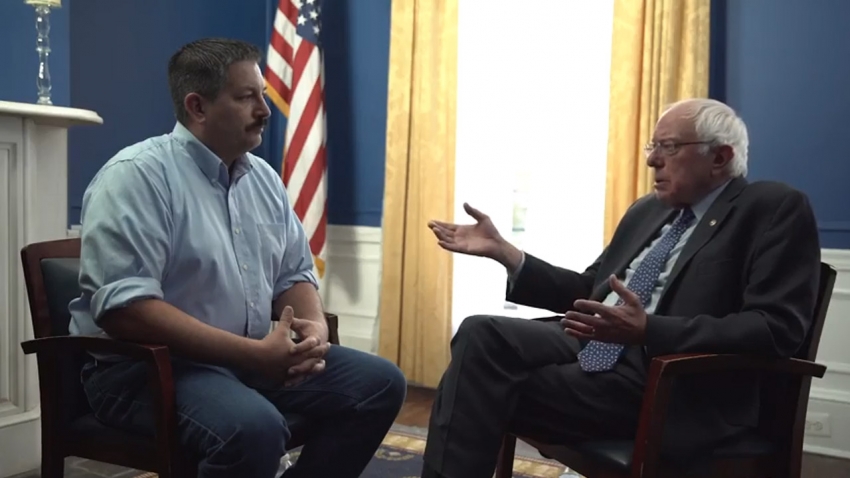 Bryce received a boost to his progressive credentials last week when he was officially endorsed by Bernie Sanders.

Sanders’ endorsement of Bryce comes at a time when the former union organizer and steelworker is rising in the polls in his bid to unseat House Speaker Paul Ryan.

Sanders’ embrace of Bryce is another indicator that progressive challengers are gaining steam in the upcoming election cycle.

“I decided to run for office because not everybody’s seated at the table—and it’s time to make a bigger table,” Bryce says in the ad. “If somebody falls behind, we’re so much stronger if we carry them with us. That’s the way I was raised. We look out for each other.”

The ad helped raise almost half a million dollars for Bryce’s campaign in just twelve days.

An Army veteran and an ironworker by trade, Bryce mixes an everyman’s appeal with genuine progressive politics—a stark contrast with Ryan’s straight-laced conservatism. And Bryce received a boost to his progressive credentials last week when he was officially endorsed by Bernie Sanders.

“We've got to protect Social Security, Medicare, and Medicaid from people like Paul Ryan,” Sanders said in a statement announcing the endorsement. “I think Randy Bryce has an agenda that is going to make sense to working families. We need Randy in Congress.”

Sanders and Bryce line up on a range of issues, from unwavering support for workers and union rights to a $15 minimum wage.

Explaining why he stands with workers fighting for a higher wage, Bryce tells In These Times, “I’ve always been supportive of a $15 minimum wage. Otherwise what we’re doing is just giving welfare to corporations. We shouldn’t be subsidizing corporations so that they can profit more on the people’s backs.”

Bryce also shares Sanders’ belief in a universal healthcare system, backs the Vermont senator’s Medicare for All bill and supports a massive investment in infrastructure spending to revitalize deindustrialized communities like those in his Wisconsin district. Joe Dinkin, spokesperson for the Working Families Party—of which Bryce is a member and endorsed candidate—says that what connects Sanders and Bryce is a commitment to progressive values.

“What Bernie sees in Randy Bryce is a working class progressive that draws a perfect contrast to ‘Wall Street’ Paul [Ryan],” Dinkin says. “Randy wants to guarantee healthcare for all, to rebuild America's roads and bridges and to make the billionaires pay for it. Paul Ryan wants to give billionaires a massive tax cut and make the middle class pay. This endorsement, coming from America's most popular political leader, is a huge deal and proves that this is a top tier race.”

Bryce says it’s not only his policy positions that that set him apart from Ryan, but also his commitment to representing the needs of his constituents rather than outside interests.

“It’s about getting trust,” Bryce says. “It’s not just showing up a few weeks before election day and trying to get people to vote. It’s about actually being involved in the community—to listen and then to come up with ways to implement the needs of the community.”

Bryce may still appear to be a longshot candidate. A recent Public Policy (PP) Poll shows him trailing Ryan by seven points. But Bryce’s campaign says that these numbers will change as more voters get to know who the candidate is and what he stands for (the PP poll shows 69 percent of respondents still aren’t familiar with Bryce).

Ryan beat his Democratic opponent in 2016 by 35 points, so the race currently sitting at single digits represents a significant change in the political winds. The Bryce campaign’s own internal polling shows Bryce winning in 2018 by a 3-point margin—assuming more voters get to know him.

“We need more working people to run for office. We understand it. We get the struggles of living paycheck to paycheck,” Bryce tells In These Times.

Asked whether his campaign will help inspire more working people like himself to run, he replies, “It’s already happening. People are contacting me. We’re seeing a record number of candidates come out everywhere. And a lot of Republicans that are going to have to fight for their seats see this wave coming, and they’re retiring in pretty big numbers.”

Sanders’ embrace of Bryce is another indicator that progressive challengers are gaining steam in the upcoming election cycle. Rather than giving in to Trump’s demagoguery or Ryan’s austerity, Bryce is trying to prove that what voters are really looking for are commonsense solutions to their problems. While the Right pushes for building a “big, beautiful wall” and enacting tax cuts for the rich, Bryce is countering with proposals for higher wages and jobs building infrastructure—policies that will clearly improve working people’s lives.

He is also showing that candidates from outside the political establishment can help usher in this new progressive vision for both the Democratic Party and the country as a whole.

“We have enough lawyers in Congress,” says Bryce “There aren’t a lot of garbage men, ironworkers, building tradespeople. We need more people that actually know what it’s like to struggle so that we have a government that’s receptive to our needs.”