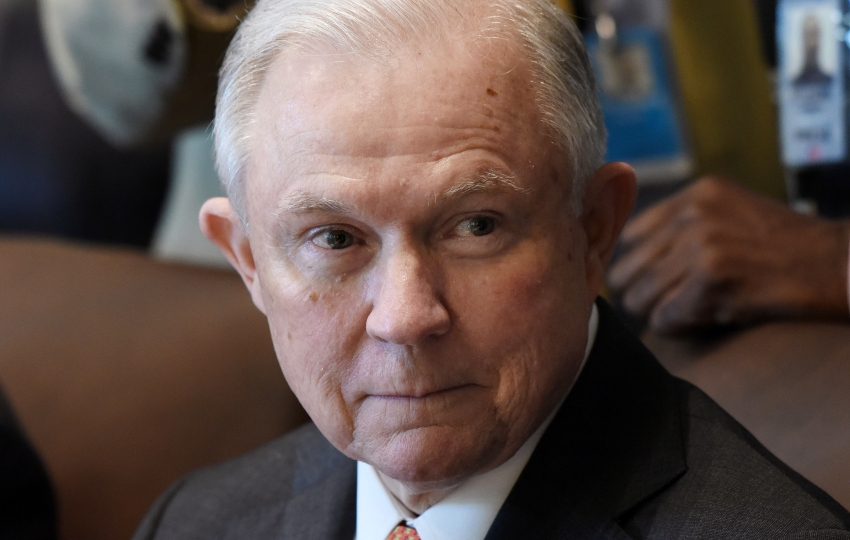 U.S. Attorney General Jeff Sessions looks on during a meeting with U.S. President Donald Trump in the Cabinet Room of the White House June 12, 2017 in Washington, D.C. (Photo by Olivier Douliery-Pool/Getty Images)

The War on Drugs Is an Abject Failure. Jeff Sessions Just Ramped It Up.

The tide is finally turning against marijuana criminalization. But Sessions just took a giant leap backwards.

Our criminal legal system is not equally applied; it has always targeted people of color.

The U.S. tide is clearly turning in favor of marijuana decriminalization. Twenty-nine states and Washington, D.C. have legalized medical marijuana. On January 1, California joined Alaska, Colorado, Nevada, Oregon and Washington in legalizing the sale of recreational pot. A Gallup poll completed in October found that, for the first time, a majority of Republicans (51 percent) support legalizing pot, while 64 percent of Americans overall support legalization. As Arcview Market Research noted, marijuana sales rose 33 percent from 2016 to 2017. The trend is obvious: The prohibition of pot, and the draconian laws that define the war on drugs, are wildly unpopular.

However, the shift in public opinion has not stopped Attorney General Jeff Sessions. His mission to revive and pump steroids into the war on drugs has continued unabated.

Back in May, Sessions released a memo directing federal prosecutors to once again seek the harshest sentences possible under the law. The memo rescinded Obama-era directives that were designed to lighten sentences for low-level drug crimes by stepping away from mandatory minimum sentencing. Such directives comprised a key component of the Obama administration's efforts to reverse some of the severely punitive actions of his predecessors.

In June, Jeff Sessions sent a letter to congressional leaders stating his opposition to the Rohrabacher-Farr amendment (also known as the Rohrabacher-Blumenauer amendment), which was implemented to protect legalized medical marijuana programs.

On January 4, Sessions went yet another step further by rescinding a series of Obama-era memos that ushered in the wave of marijuana legalization by directing federal prosecutors not to intervene in states that legalized pot. While marijuana’s federal status as an illegal, controlled substance never changed, these memos essentially let the states govern themselves in this realm. Now, however, the status of medical and recreational legalization may be in peril, as the federal government is again free to raid state-approved clinics and dispensaries.

So much for states' rights.

None of these developments should be surprising, given that Sessions once said that “good people don't smoke marijuana,” and that marijuana was “only slightly less awful” than heroin. He also said the relaxing of drug laws was one of Obama's “great failures,” before praising Nancy Reagan's “Just Say No” campaign, which was an abject failure. And Sessions' troubling history on race cannot be ignored either, as it is part-and-parcel to his overall ideology. He was denied a federal judgeship in 1986 for a series of racist comments which including calling the NAACP “un-American” and calling a civil rights lawyer a “disgrace to his race.”

The war on drugs, any way you spin it, has been a colossal, trillion-dollar catastrophe. The punitive measures taken under every president from Nixon through George W. Bush have been entirely unsuccessful in curbing drug use and sales. They have however been successful in destroying communities of color, bolstering the cycle of poverty and helping to give the United States the highest incarceration rate in the world.

Our criminal legal system is not equally applied; it has always targeted people of color. Research by the Herald Tribune found that Black people in Florida received far longer sentences than white people with identical charges and criminal records. Department of Justice investigations found that the Chicago and Baltimore police departments routinely violated civil rights laws by unfairly targeting African Americans and Latinos. And there was the obscene 100:1 crack-to-cocaine sentencing ratio (the law until 2010; its now 18:1), which led to thousands of Black people being sent to prison for exorbitant sentences, while white people convicted of cocaine possession enjoyed far greater leniency. Crack and cocaine are the same drug, but crack was generally used by poor Black people, and cocaine was generally used by middle to upper-class whites.

As the Prison Policy Initiative reported, of the more than 2.3 million people currently incarcerated in the United States, approximately one in five is currently locked up for a drug offense. Moreover, the drug war has served to demonize people with addictions by pushing them to the fringes of society.

We are currently in the midst of a drug epidemic, with at least 66,324 people killed of drug overdoses between May 2016 and May 2017. The impact is so severe that it caused the life expectancy in the United States to drop in 2015 and 2016. A cursory examination of recent history and data clearly shows that drug addition will not be solved through fist-pounding law and order. Instead of locking people up, we need to expand medication-assisted treatment, destigmatize addiction and drug use and address the highly deceptive maneuvers of big pharma.

Expanding access to medical marijuana is a critical part of the solution. Some research has shown that marijuana is highly effective in combating chronic pain, and it is not nearly as addictive as opioids.

Attorney General Jeff Sessions is aggressively sending the country in the wrong direction. If he continues along this path, our prison population will continue to rise, people with addictions will continue to be cast out from society and the opioid epidemic will grow even more deadly. The seriousness of these actions cannot be overstated: Our prison system is an international disgrace, and it's directly tied to the drug war.