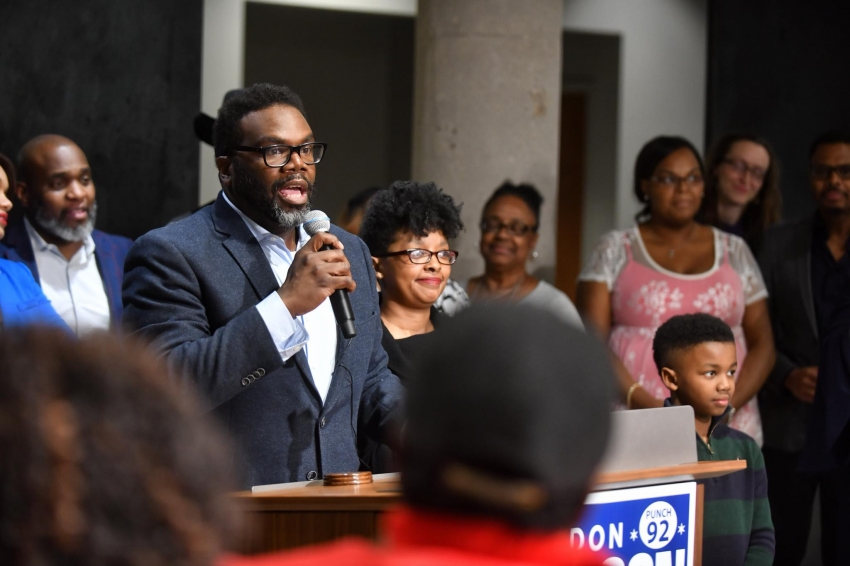 While progressives didn’t win all their races, they did show that the establishment is vulnerable and that left platforms are popular.

Winning outright is always the goal in a political race, but it isn’t special pleading to note that in primaries, especially, a movement wins just by being in the race and shaping the debate.

In Tuesday’s Illinois primaries, the Chicago Democratic Machine was challenged on multiple fronts. And if the results are a sign of things to come, progressive forces in Chicago could be on the ascent.

The 3rd congressional district primary in Illinois captured much about the past two years of our national politics. On the Democratic side, an establishment, centrist Democrat faced a progressive challenger to his left. On the Republican side, the only candidate in the race was a white supremacist and Holocaust denier.

The Democratic race between incumbent Dan Lipinski and insurgent Marie Newman in Chicago’s South West Side and surrounding suburbs ended in nearly a draw, with Lipinski clinging to a narrow lead. At the Newman election night party on Tuesday, spokespeople for the various organizations that had mobilized volunteers for the progressive challenger gave periodic pep talks as the night dragged on and precinct reporting slowed to a crawl. With the results stalled in the low 90s of precincts reporting, and Lipinski maintaining a lead of about two percentage points, the Human Rights Campaign (HRC)’s national field director, Marty Rouse, took the stage to announce that “it’s time for Dan Lipinski to go” and “we are going to stay here until every vote is counted.” Newman said she wasn’t ready to concede because she “would like Mr. Lipinski to have a very painful evening.”

The last of the votes were still being counted Wednesday morning, with Lipinski holding on to a two-point lead. The narrow loss for Newman comes as a disappointment for progressives who were hoping to oust a centrist Democrat in one of the most highest-profile House races in the nation. Over the past few weeks, multiple media outlets published various “Democratic Party civil war” articles, focusing on the Lipinski-Newman race. A Newman win would have sent a bold message about the progressive movement’s electoral muscle. In addition to NARAL and HRC, Newman had the endorsement and support of organizations such as the Progressive Change Campaign Committee, Our Revolution and Justice Democrats—key players in the emerging progressive infrastructure around electoral politics.

Progressives, in other words, were all in on this one. So, what’s the takeaway from a loss in the 3rd, and from the results in Illinois more broadly?

Winning outright is always the goal in a political race, but it isn’t special pleading to note that in primaries, especially, a movement wins just by being in the race and shaping the debate. That is what made the Tea Party a powerful force on the Right in the early 2010s. It is remembered mainly for being anti-tax and anti big-government, but, in truth, its power was as much in its anti-immigration stances and in its use of primaries to force incumbent Republicans to reject “amnesty” for undocumented immigrants. Relatively few Republicans got elected by prioritizing an anti-immigrant agenda. But the work done by the Tea Party in the primaries—by fielding candidates, or just threatening to—reshaped the debate and made immigration, along with tax cuts, the heart of the Republican platform under Donald Trump.

The Left has its own game-changing issue in single-payer healthcare. Marie Newman ran on a strong commitment to push Medicare-for-all legislation, along with a $15 minimum wage, immigrant protections and abortion rights. Lipinski was vulnerable on multiple fronts—he’s anti-reproductive choice and anti-LGBT rights, for example—so his vote in 2010 against the Affordable Care Act was just one of many ways he proved how profoundly out of step he is with where the Democratic Party is headed.

At her campaign event on Tuesday night, Newman acknowledged how her platform in the race put pressure on Lipinski to move in a more progressive direction: “We have moved him on immigration, we have moved him on healthcare, I scared the crap out of him on $12 versus $15.”

Lipinski, a seven-term incumbent and Machine Democrat, came as close to losing as he has in his political career, which began in 2004, when he inherited the seat from his father William, an ally of the old Chicago Mayor Richard J. Daley, who was first elected to Congress in 1982. After nearly being taken out by Newman, a political newcomer, Lipinski’s chances of holding on to the seat in 2020 are slim. As The Intercept’s Ryan Grim pointed out: “If Lipinski pulls this out, he immediately becomes a lame duck, since his seat would be Newman’s for the taking in a presidential cycle. And the composition of the 2021 Democratic class matters much more for policy than the 2019 one.”

So if Newman decides to challenge Lipinski again in two years, she would almost assuredly have a better shot, especially in a year that Donald Trump will most likely sit at the top of the ballot. And by running as a strong progressive, she helped shift the dynamics of the race, which in turn could inspire other left challengers to do the same in the future.

The case of Mike Quigley in the 5th District may be more typical of the coming battles within the party. A five-term incumbent, Quigley’s record is right in the middle of the Democratic pack. Unlike Lipinski, he has a solid record on reproductive and LGBT rights. But his record on civil rights and legislation that favors corporate interests earns him a progressive score of D, overall, from the vote-tracking website Progressive Punch. Quigley was primaried from the left by Sameena Mustafa, a progressive endorsed by the Justice Democrats, who made Quigley’s lack of support for Medicare for all central to her campaign.

Mustafa got about 24 percent of the vote, to Quigley’s 63 percent, in a four-way race. Is that enough of a challenge to move Quigley to the left on healthcare? We’ll find out soon enough. But we know, from the recent example of the Tea Party, that having candidates in the race like Mustafa, who prioritize a galvanizing issue like single-payer healthcare, does move the needle within the party—even when they lose.

Another takeaway from Tuesday’s results is that, despite the sting of Newman’s loss, the movement is building actual election-winning power that has implications for 2020 and beyond. Four candidates endorsed by progressive organization United Working Families (UWF), the Illinois partner of the Working Families Party, won their races, including Delia Ramirez in Illinois’ 4th house district, Brandon Johnson, a Chicago Teachers Union member, in the Cook County Commissioner District 1 race, Alma Anaya in the Cook County Commissioner District 7 race and Aaron Ortiz, a 26-year-old challenger who took out state Rep. Dan Burke, the Chicago Machine’s candidate in the House 1st District race on Chicago’s South West side.

Responding to the victories, UWF Executive Director Emma Tai said: “The United Working slate was comprised of young people of color who were first-time candidates. They took on big-money interests and the Democratic machine and they won. We stand ready to take on the corporate Democrats who have let incarceration, violence, gentrification and unemployment ravage our communities. And tonight’s results show that the voters are with us.”

And then there is the case of the Cook County Assessor’s race, which pitted longtime incumbent Joseph Berrios against progressive challenger and political newcomer Fritz Kaegi.

It’s the kind of race that typically flies under the radar, but it attracted the media spotlight in recent weeks after the release of a study that found that the Cook County Assessor’s office, under Berrios, had systematically undervalued expensive homes and overvalued more modest homes. Pro-Publica noted that the errors “amount to a staggering transfer of wealth”—totaling about $2.2 billion, from 2011 to 2015—“that benefited Chicago’s most affluent homeowners at the expense of people who own lower-priced homes.”

The story was about more than just the way the assessor spiked inequalities in Cook County. It was a textbook example of old-school, Chicago-style corruption, specifically Democratic Party corruption, since people who want to contest their home valuation are steered to lawyers who are often, in turn, big donors to the very Democratic Party machinery responsible for the valuations.

Kaegi, who had the endorsement of Our Revolution, beat Berrios by about 11 points, 45 to 34 percent. It’s one small victory for much-needed house cleaning within the Democratic Party. And—hopefully—a sign of much more to come.