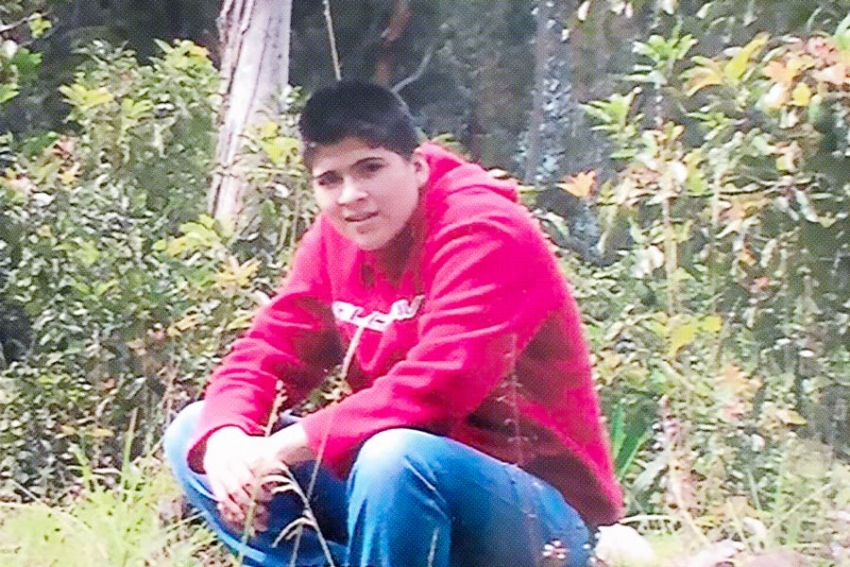 Donato Sanchez is pictured here in 2010, the year he was released from the Bridge to Life "gay rehab" clinic at 19 years old, before his hormonal therapy.

When the “Cure” for Homosexuality Is Torture

'All I ever wanted was for [my parents] to understand me. Nothing more. But that never happened.'

ECUADOR—When Donato Sanchez, a transgender man, walked into a “gay rehab” clinic for the first time, he didn’t know he was going to stay. His father had convinced him to “check out the facilities,” nothing more. Sanchez had been told that if he chose to enter the clinic, it would “be of my own free will.” At the time, Sanchez identified as a gay woman, which his parents never accepted. He had run away from home at 16, returning only because he had no money.

But as he and his father walked through the clinic’s cold, sterile hallway, he was seized with fear—and when he turned, he saw his father was gone. A large guard appeared and grabbed him. Sanchez struggled and tried to scream, but the guard seized him by his throat and squeezed. Two nurses dragged him to a bathroom, stripped him, threw him in a cold shower and dressed him in a hospital gown. “I didn’t see my family until four months later,” Sanchez says. “Not a call, not a message, nothing.” He was 18 at the time.

That was the beginning of Sanchez’s nine months in a rehab clinic in Ecuador called Puente a la Vida (Bridge to Life), to be “cured.” The “cure” included regular beatings, verbal abuse, daily Bible study and a bastardized version of the Alcoholics Anonymous program, in which sexual orientation was treated like addiction.

Local LGBTQ rights groups estimate there are more than 200 of these clinics in Ecuador, also known as “gay-curing centers.” They are illegal and operate clandestinely, registered as private clinics for drug and alcohol addiction.

“Sexual conversion therapy” continues to be practiced in many countries, including the United States. The World Health Organization and the Pan American Health Organization have called these clinics a “serious threat to the health and well being of affected people.”

The irony is that Ecuador has long had some of the world’s strongest LGBTQ protections and is one of the few countries to outlaw these clinics. Twenty years ago, Ecuador banned discrimination based on sexual orientation in its constitution. A decade later, its 2008 constitution legalized same-sex civil unions. But the clinics remain open.

Bridge to Life’s conversion treatment, Sanchez recounts, also includes berating gay men to be more tough and masculine, and “teaching” lesbian women to be more feminine. This has been reported in other Ecuadorean clinics, too, where women are forced to wear makeup, dress in miniskirts and high heels, and parade in front of guards in attempts to arouse them. In some cases, women are raped by male guards as part of the “dehomosexualization” process.

Those who don’t abide by the clinics’ strict rules incur harsh punishment. At Bridge to Life, Sanchez says, people were sentenced to silence for days at a time, forced to sleep on the tile floors, deprived of meals, fed horse tranquilizers or beaten with the flat side of a machete.

Like Sanchez, most people in the clinics are placed there by their families, often by force. Some families drug their queer relatives or enlist the police to haul them in. Families pay the clinics $500 to $1,500 a month.

“From a psychological point of view, this destroys a person,” says Edgar Zuniga Salazar, a psychologist with the Ecuadorean Network of Psychology for LGBTI Diversity. Salazar says most of these patients experience post-traumatic stress disorder. Their symptoms include nightmares, paranoia, self-isolation and an extreme drop in self-worth.

While Ecuador maintains that these practices are prohibited, punished and in no way promoted by the government, local activists tell another story. Cayetana Salao with Taller Comunicacion Mujer, an LGBTQ rights group, says many clinics receive sanctions from the Ministry of Health and temporarily close down, only to make a few administrative changes and quickly reopen. The Ministry of Health did not respond to In These Times’ requests for comment.

In October 2017, one of these groups, Con Mis Hijos No Te Metes (Don’t Mess with My Kids), organized a massive protest against teaching gender studies in schools. The group is supported by the international conservative group Citizen-Go, on whose board sits Brian Brown, president of the U.S.-based National Organization for Marriage.

“All I ever wanted was for [my parents] to understand me. Nothing more. But that never happened,” Sanchez says. “There’s no therapy for that.”