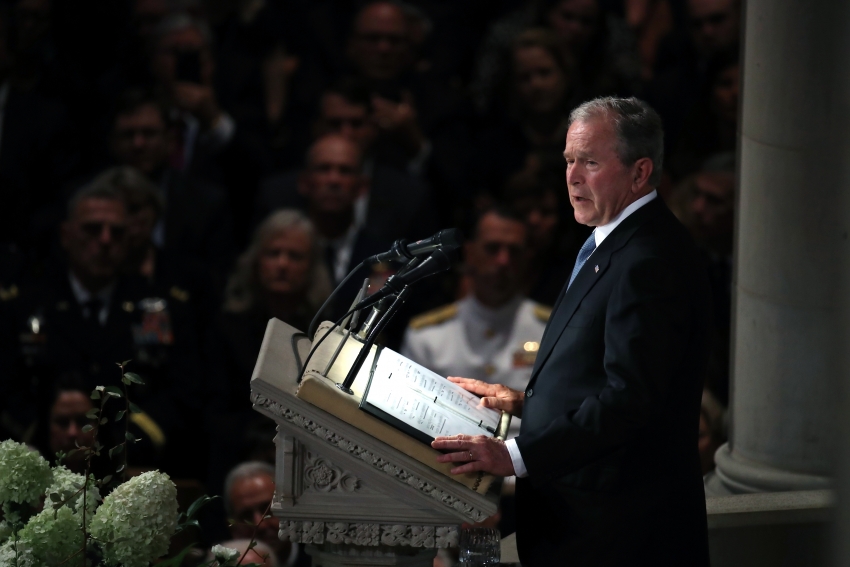 Rehabilitating a Monster: George W. Bush and the Bankruptcy of Civility Politics

On the laundering of a war criminal.

One would think that history would have long destroyed any semblance of nostalgia for George W. Bush, but the political fanfiction abounds—in spite of it.

The death of an American statesman adds a new volume to the body of tradition which so vigorously demands that we exculpate and rewrite the history of the dead. In the case of John McCain, the machine of reinvention began to creak and whirr before a single clod of earth was thrown. The mourners who stood behind the lectern to mark the passage of McCain were themselves notorious characters plucked from the extensive chapters of U.S. empire—from Barack Obama to Henry Kissinger to George W. Bush. The casting aside of bipartisan divisions in defense of “American greatness” was both an affirmation of Washington's political class, and a legitimization of their immense power. There, sheltered inside a house of god, a flock of grieving monsters intoning hymns and calling for unity laid bare the cruelty of the American psyche, which remains unmoved by death abroad.

What draws the most feverish pomp and circumstance in the United States is the death of the politician, no matter their crimes. The obsessive coverage of John McCain’s meticulously planned, five-day mourning period is only the latest installment. The late senator's procession was one of grandeur, with Democrats and Republicans filling the pews, each taking possession of history in order to sanctify John McCain and extol the fabricated virtues of the country he once served. Among them was none other than George W. Bush, who stood before a throng of bereaved colleagues and spoke of how McCain “respected the dignity inherent in every life.” George W. Bush would know a thing or two about human dignity, as he violently stripped so many of it himself. Only a few years have crawled by since the Senate Intelligence Committee's investigation into the CIA’s detention and enhanced interrogation program—which culminated in a report that was more than 500 pages long.

For the Americans who now obsess over the charade of civility, the graphic details have had little impact on their attitude towards George W. Bush, who survived his two terms immune from prosecution. A distillation of the American fixation with respectability and keeping up political appearances comes from The New Yorker’s Susan B. Glasser, who wrote on September 1 that John McCain’s funeral “was a meeting of the Resistance.” Architects of war and human suffering thumbing their nose at the divisiveness of political theater convinced Glasser that a cavalcade of influential mourners constitutes a meaningful opposition. The columnist’s description of McCain’s wake was mawkish, bordering on absurd. Glasser writes, “For a moment, at least, [Democrats and Republicans] still lived in the America where Obama and Bush and Bill Clinton and Dick Cheney could all sit in the same pew, in the same church, and sing the same words to the patriotic hymns that made them all teary-eyed at the same time.”

It isn't that, collectively, Americans have short historical memories, but that they willfully ignore the ruinous consequences of reinvention. The laity simply do not care, and the Fourth Estate has all but facilitated Bush’s comeback. It's for this reason that a former president, who oversaw an apocalyptic shock and awe campaign, was rehabilitated as a homely and wholesome painter. George W. Bush, whose administration wantonly poisoned Iraq with nearly 10,000 rounds of depleted uranium, and gave license to torture and indefinite incarceration without due process in offshore detention sites like the notorious Guantánamo Bay, was invited last year to sit across from Ellen DeGeneres and share self-deprecating barbs with Jimmy Kimmel to the benefit of his promotional book tour. Missing were the images of children suffering the aftermath of U.S.-made radioactive weaponry and the haunting photographs of Iraqi men languishing in Abu Ghraib. There was no meaningful discussion of the global surveillance apparatus that targeted and racialized Muslims. The body politic has not even come to terms with the full extent of this bloodbath. One would think that history would have long destroyed any semblance of nostalgia for George W. Bush, but the political fanfiction abounds—in spite of it.

Writing for Esquire in March, author Charles P. Pierce marked the anniversary of the invasion and subsequent occupation of Iraq, which he said the former cradle of civilization has not recovered from. “The most remarkable result of all,” Pierce wrote, “is that almost nobody paid any real price for their role in this nightmarish escapade. … The green rooms should have emptied as a day of atonement. George W. Bush should have spent the day in the stocks.” Fast forward a mere six months and the same Charles P. Pierce finds himself “moved to a kind of optimism” by eulogies delivered over the heavy air of a representative’s death, a number of which may very well have been composed by speechwriters. “This was a funeral with more than one purpose—to celebrate the passing of John McCain and to summon a rebirth of politics that did not so much reek of grift and vodka,” Pierce argues. I can't attest to whether or not the smell of vodka was present in the cathedral that day, but the miasma of nationalism—the violent racket which so effortlessly conquers and exterminates—bathed the room. Pierce doubled down, decrying what he described as “lefty hot takes.” He wrote, “House is on fire. Don't care who brings a hose.” The recklessness of liberal discourse around Trump has led to this ravenous hunger for a savior that will liberate them from his embarrassing brutishness, and most recently that's resulted in conjuring up firefighters at a funeral.