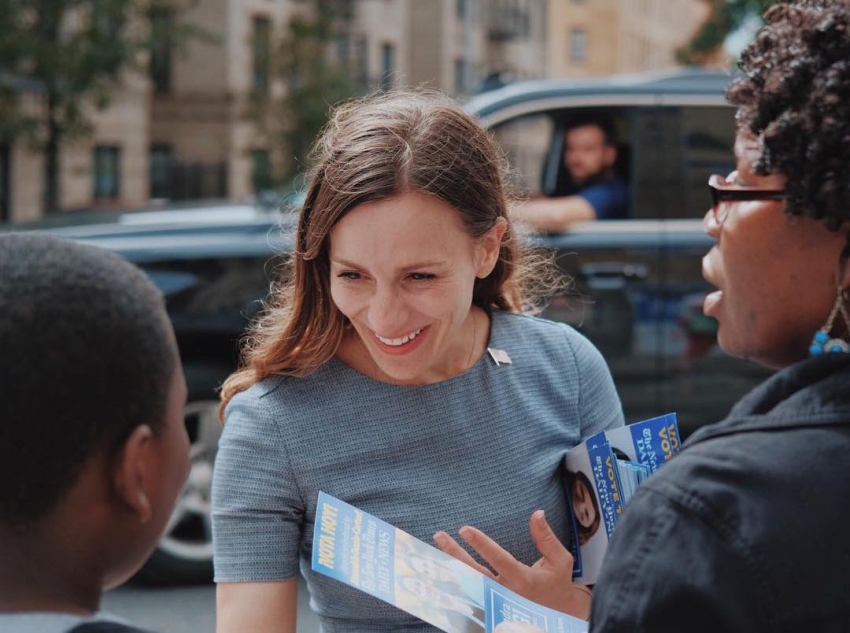 Voters in New York just told members of the conservative-leaning IDC to GTFO.

The movement on the party’s left dealt a serious blow to the corruption at the core of the Democratic political machinery.

Thursday’s primary in New York spotlighted both the very best and very worst of the Democratic Party.

The bad news for progressives shouldn’t overshadow the good news. The highest profile progressive candidates, Cynthia Nixon and Zephyr Teachout, lost by wide margins. But the movement on the party’s left dealt a serious blow to the corruption at the core of the Democratic political machinery—likely transforming the state’s legislature, which has technically been controlled by Democrats but effectively ruled by the GOP.

Six members of the Independent Democratic Conference (IDC) were booted. That’s a group of eight Democrats who thwarted progressive legislation by caucusing with Republicans in the state senate since 2011. IDC members were heavily funded by New York’s real estate interests. The GOP rewarded them for crossing over with perks like plum committee assignments and plush offices.

The most startling win of the night was Alessandra Biaggi’s win over IDC’s leader, Jeffrey Klein, whose campaign raised nearly $2 million, which he used to blizzard the district with ads in the final weeks. Biaggi raised just a fourth of that. But she had the backing and volunteer support of groups like Our Revolution and the Working Families Party (WFP).

The WFP, in particular, has had IDC in its sights for several years. WFP state director Bill Lipton put out a statement Thursday night saying that “New York politics changed forever tonight” and that “a new generation of leaders are heading to Albany to fight for a New York that works for the many, not the fortunate few.”

Many legislative seats were uncontested, but all eight IDC members had challengers. Like Biaggi, the challengers mostly ran on platforms that stress anti-corruption measures and broadly progressive agendas, with a strong focus on affordable housing—an issue that connected the dots between the IDC’s funders and out-of-control rents in New York.

In the 20th senate district, Zellnor Myrie’s platform called for a raft of measures to create more affordable housing—an end to a law that caps rent stabilization, a new formula to calculate affordability levels for new developments, and the closing of a loophole that allows for sudden rent increases.

In the 13th district, Jessica Ramos—a labor organizer and daughter of Colombian immigrants—won on a platform calling for affordable housing, expanding labor and reproductive rights, creating a single-payer healthcare system, and investing in education and the MTA, New York City’s public transportation system.

MTA funding was a key issue for many of the insurgents who toppled the IDC. It’s a state agency, controlled by the governor, and the system is falling apart and in crisis under the watch of Gov. Andrew Cuomo who has consistently blocked new investments in it. A public transportation advocate, Nick Sifuentes, recently noted in the New York Times that the “consequences of years of disinvestment have been severe: Riders now have to contend with more than 70,000 delays a month (well over a delay every minute) and record levels of overcrowding on trains.”

A new morning in Albany

Incumbency and name recognition helped Cuomo survive that and other critiques—he beat Nixon handily, 66 to 34 percent. But the challenge from his left probably signaled that the New York governorship is the end of the line for Cuomo’s political career.

During a debate, he promised not to seek the Democratic nomination for president in 2020. That’s a little like Red Lobster announcing that it hasn’t been awarded a Michelin star: Not surprising. He was never a serious contender.

It would be difficult for a Democratic governor to be more out of sync with the energy in the party, or for a state to be more out sync with its reputation as a lodestar of progressivism. And it isn’t just about the MTA crisis. New York is generally a neoliberal mess. The state leads the nation in inequality, for example, with the top 1 percent earning 45 time more than the bottom 99 percent, according to a 2016 report by the Fiscal Policy Institute. Since 1979, inflation-adjusted incomes have grown by 272 percent in New York for the top 1 percent, versus 5.4 percent for the rest of the population.

Cuomo—the state’s governor since 2011, and heavily funded by real-estate developers—has used his time in office to, among other things, support corporate tax cuts and veto a bill that would have required the state to fund legal services for the poor.

Cuomo’s sorry record didn’t cost him his job on Thursday. But the election marked a turning point as decisive as if Nixon had won. Cuomo has said that “New York is the alternative state to Trump’s America”—a boast that’s mostly hot air to this point. But a wave of insurgent progressives is about to call Cuomo’s bluff. As the WFP’s Lipton noted in Thursday’s aftermath, he’ll “have to deal with something new for him after November.”

That something looks like actual progressive politics—a welcome change for New York.