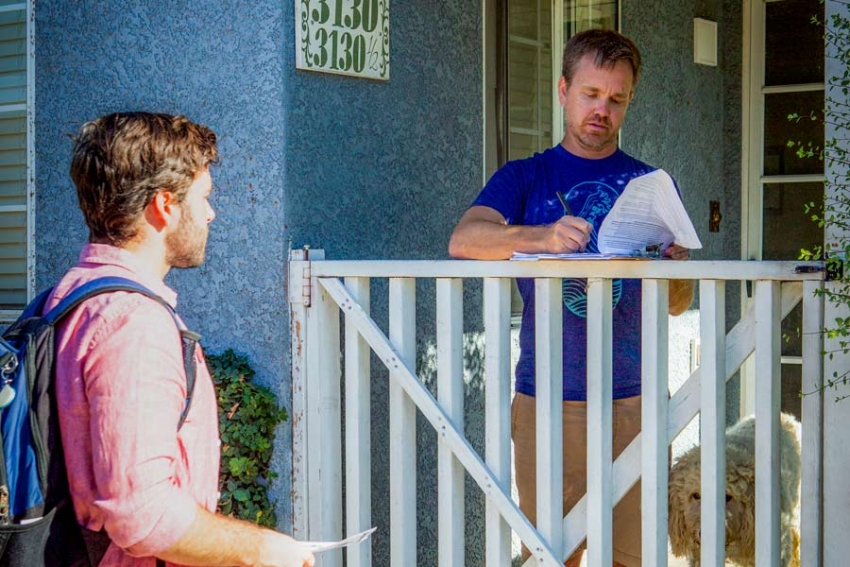 Los Angeles DSA is harnessing anger over skyrocketing rent to get nonvoters to the polls in November.

DSA-L.A pushes for Proposition 10, a measure on the California ballot this November to repeal the 1995 Costa Hawkins Act, which prevents cities and counties from establishing rent control laws.

CULVER CITY, CALIF.—Media Park, a small scrub of land wedged bet ween two major streets, doesn’t have benches or picnic tables. For Democratic Socialists of America (DSA) members, this made assembling stacks of flyers and walk lists difficult. Andy Perrine, one of the participants, had a theory for the lack of seating: “It’s so the homeless have nowhere to sit.”

Ending homelessness was part of DSA’s mission on this bright Sunday afternoon. The Los Angeles chapter was canvassing for Proposition 10, a measure on the California ballot this November to repeal the 1995 Costa Hawkins Act. The Act prevents cities and counties from establishing new rent control laws for most apartments and all singlefamily homes or condo rentals. Costa-Hawkins also incentivizes evictions, allowing landlords to raise rents to market rates when units become vacant.

Prop 10 supporters blame Costa-Hawkins for contributing to California’s housing affordability crisis. In every metropolitan area in the state, between 30 and 60 percent of the population cannot afford local rents. Homelessness has spiked, 90-minute commutes are increasingly common, and the state has lost half a million residents in a decade, which many attribute to high housing costs. “We believe housing is a human right that shouldn’t be left to market forces,” said Blake Roberts, a DSA member from Culver City, leading a training.

Prop 10 is the first foray into state politics for DSA-L.A., one of at least six state DSA chapters canvassing for the initiative; they began knocking on doors in June, before it even had a ballot number. “It’s very clear that this is the most urgent issue facing Los Angeles,” says DSA-L.A.’s Arielle Sallai. In addition to notching a win for the housing justice movement, Sallai feels it matches DSA’s goal of building a workingclass power base. More than 50 volunteers show up to each canvass, and she expects DSA-L.A. to reach thousands of doors.

The Westside canvass initially congregated in Palms, an apartment-heavy area. But to win statewide against the millions of dollars realtors and property managers plan to throw into defeating Prop 10, you have to visit homeowners, too, like those on the leafy residential streets of nearby Culver City.

Roberts asked one Culver City homeowner if he knew anyone coping with high rents. “Everybody in L.A.!” the man replied, taking a flyer.

Even in Culver City, Roberts found the occasional renter. Single-family home rentals became more widespread after the financial crisis, when financiers scooped up foreclosed properties. The CEO of Wall Street giant Blackstone, America’s largest single-family landlord, has shelled out $4.2 million to the “No on Prop 10” campaign.

DSA-L.A. has walk lists, like any door knocking campaign, with one key difference—theirs are made up of infrequent Democratic and independent voters. “People who are unlikely to vote make up 50 percent of the population,” Roberts said. “They’re not voting because they feel like there’s no voice in politics responsive to their interests.”

Targeting unlikely voters stands the conventional wisdom of election strategists on its head. It also mirrors the tactics of Alexandria Ocasio-Cortez’s upset congressional victory in New York. Ocasio-Cortez has often said that swing voters for democratic socialists are not red to blue, but nonvoter to voter.

On this day, canvassing nonvoters yielded a little wariness. Roberts aimed to provoke conversations—“the person at the door should be talking 80 percent of the time,” he told canvassers—but several residents said they were busy or politely thanked him and shut the door.

But DSA-L.A. insists on bringing new voices into the process.

Even Prop 10’s opposition admits there is a housing crisis, but argues that rent control would exacerbate it by halting needed construction. Experts are divided on this point, but the Los Angeles Times and Sacramento Bee have endorsed Prop 10, arguing it would give cities tools to mitigate soaring rents.

Overall, canvassers reported a positive response. “It’s some of the easiest canvassing I’ve ever done,” Sallai says. “We’re here to talk about how unaffordable the neighborhood has gotten. And they’re like, ‘Yes.’”

At one of the last homes on Roberts’ canvass, the reception was cooler. “I’m a landlord, I don’t want rent control,” said an older man. “You don’t want to talk to me, because I get nasty.”

Blake tried to be diplomatic, saying, “It’s still important to have conversations.”