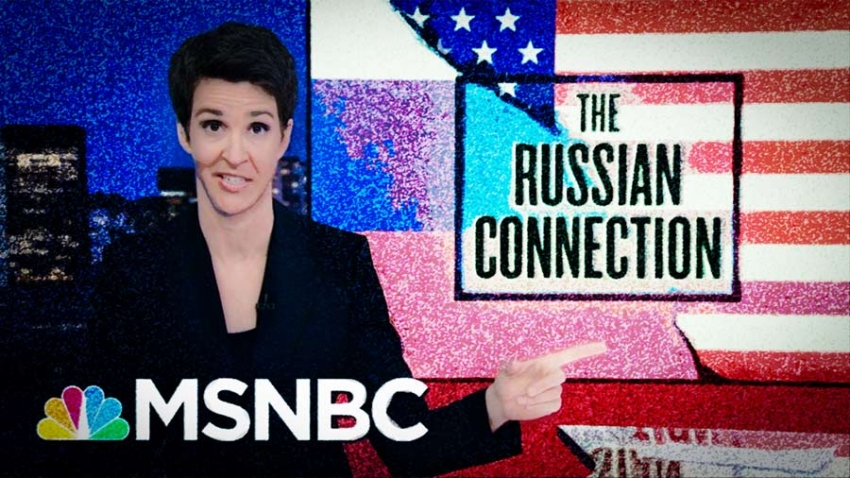 In a six-week period in 2017, Rachel Maddow covered Russia more than all other news topics combined.

Why I’m Sick and Tired of Hearing About Russiagate

Mueller won’t save us from the deep flaws in our democracy that brought us Trump.

I'm a recovering Russiagate addict. Not so long ago, I awaited the latest Russiagate tweet from Seth Abramson as eagerly as a new installment of Serial. These days, I roll my eyes and scroll on.

I’m not a skeptic. I don’t doubt that Russia hacked the Clinton campaign, trolled social media or attempted to access election machines. This is entirely consistent with what we know of Russia, which, according to a 2017 Newsweek investigation, hacked both the McCain and Obama campaigns in 2008 and has continued phishing attacks on U.S. officials and politicians ever since, accessing the Joint Chiefs of Staff email system in 2015. Nor is Russia a newcomer to online manipulation. A former employee of Russia’s “troll factory”—the Internet Research Center in St. Petersburg—told NPR of creating fake social media accounts in 2014 to sow discord in the United States.

Nor would I be surprised if Donald Trump made backroom deals with Russia. Trump has never met an oligarch he didn’t want to do business with, including one described by a U.S. diplomat as “notoriously corrupt, even for Azerbaijan.”

What I question is the proportion of Russiagate coverage and amount of hope that liberals vest in it. In July and August, the New York Times ran 16 front-page stories about Russia and Rachel Maddow discussed it in 30 episodes of her MSNBC show. The Times also ran a breathless 12-page special report in September that calls Russia’s 2016 cyber-meddling “unprecedented”—ignoring the many precedents. Much of this reporting focused on the minutiae of the Mueller investigation.

Ultimately, the front page of the Times is limited real estate, and devoting it to Russiagate sidelines other Trump administration scandals unfolding in real time. During July and August, the National Labor Relations Board laid plans to restrict union organizing, the Department of Defense successfully lobbied for a $716 billion budget, and the Office of Management and Budget moved to penalize immigrants who use welfare. None of these stories made the front page.

What also galls is that the media focus on Russian influence contains a whiff of self-absolution. Recall that, as of March 2016, the Trump campaign had received $1.9 billion in free press, according to media firm SMG Delta; the next-highest was Hillary Clinton at $746 million. Les Moonves, then-chief of CBS, joked that Trump’s candidacy “may not be good for America, but it’s damn good for CBS.” The campaign invested little in ground operations or advertising. Would it have taken off without the media’s help?

Of course, the media cannot be separated from its eager consumers. Many of us wish to wake up from the nightmare of November 2016. The Mueller investigation, with its Watergate parallels, seems to offer that hope.

But here lies another, subtler danger of Russiagate. The fantasy of Mueller as savior relies on an inherent faith in the system. The wheels of justice are turning; we need only sit back and wait, and the aberration will be corrected.

But what if 2016 was no aberration? What if something is rotten in U.S. democracy? One clear sign is the dismal voter participation: 56 percent in the presidential race, 10 to 30 points lower than recent turnouts in much of Europe. To isolate Russia’s influence is to ignore long-gathering storms: the Republican suppression of the vote; the Democratic establishment’s failure to field a candidate who could credibly speak to growing rage over inequality and endless war; the misogyny and xenophobia that Trump was able to exploit; and the widespread disillusionment with our political system that made voting for Trump—or staying home—an attractive “fuck you” move.

In an election decided by 77,744 votes in three states, almost anything can be said to have tipped it. Our democracy should be healthy enough to stand up to Russia’s predictable, often ham-handed meddling. (How much sway should a “Hillary is Satan” Facebook post really have over public discourse?) To properly inoculate ourselves may mean something indeed unprecedented: insistent organizing for transformational change, whether that’s the public financing of elections, the restructuring of our political system for real participatory democracy or the fundamental redistribution of wealth and power. One crucial piece of any of this is a responsible and responsive media.