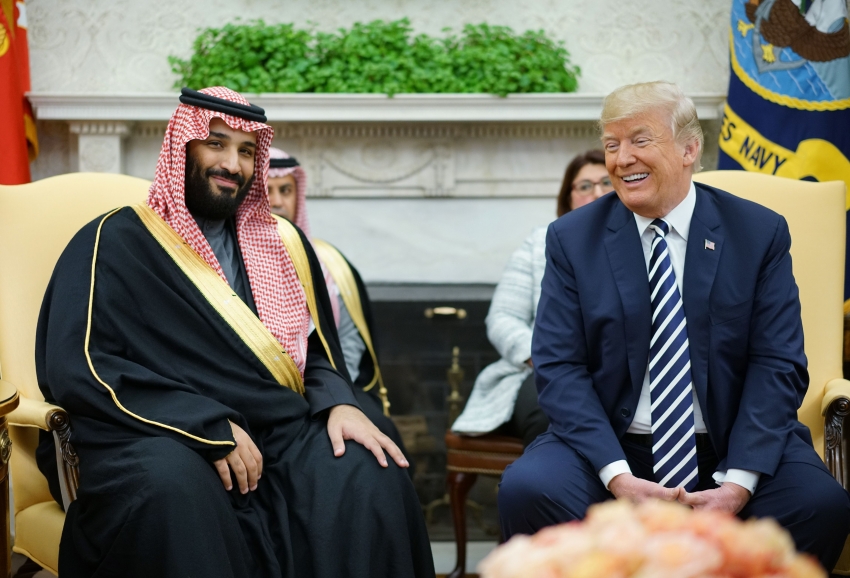 The U.S. and Saudi Arabia Have Been Getting Away With Murder for Years

Saudi Arabia’s alleged killing of journalist Jamal Khashoggi has forced the kingdom’s brutality into the media spotlight. Meanwhile, the war on Yemen has taken a back seat.

The humanitarian crisis in Yemen is a deliberate and orchestrated blaze fueled by petrodollars and the U.S. military.

March 2015 marked a decisive phase in what is now a more than three-year war in Yemen. Saudi Arabia, in coordination with members of the Gulf Cooperation Council, initiated a military operation against Yemen’s capital of Sana’a in an effort to dislodge any fragment of Houthi presence while also fomenting a tide of psychological warfare that would signal the ruthless course of action to come. Yemen’s infrastructure was so thoroughly upended by coalition attacks that within a year and a half of the initial salvo, the local population was struck by the worst cholera outbreak ever recorded in modern history. Today, with an aerial and naval blockade choking off aid supplies, the number of Yemenis who are entirely dependent on humanitarian assistance is over 22 million. The catastrophic impact on mental health in Yemen has resulted in psychological trauma, including a surge in suicide rates. Despite worldwide condemnation, U.S.-backed coalition airstrikes have continued—targeting hospitals, medical facilities, religious sites, and even gatherings of mourners.

While the media landscape is saturated with concern for the whereabouts and likely demise of Saudi journalist Jamal Khashoggi, whose reported disappearance has thrown the Kingdom’s advocacy campaign into overdrive, concern for Saudi Arabia's military offensive in Yemen has taken a backseat. Still, the bloodshed in Yemen has not abated for a moment, with American weapons lighting the way.

In August, after striking a school bus in Yemen’s Saada province—resulting in the deaths of 44 Yemeni children—the Saudi-led coalition apologized and admitted—to some extent—that “there were mistakes made in abiding by the rules of engagement.” This admission, while rare, was made in an effort to thwart international pressure against Saudi Arabia's military operations—a feeble exercise of propaganda that is inconsequential as its war machine rages on.

The humanitarian crisis in Yemen is a deliberate and orchestrated blaze fueled by petrodollars and the U.S. military. Without the profitable relationship that Saudi Arabia and its Gulf allies have had with the United States, with exchanges of military packages crossing all partisan lines, what is unfolding in Yemen would not have been possible. The laser-guided bomb used in the school bus attack that drew, arguably, some of the most striking opprobrium against Saudi Arabia, was made by none other than U.S. weapons-manufacturer Lockheed Martin. In 2016, after the intentional bombing of a community hall in Sana’a filled with mourners, fragments of a 500-pound bomb produced by Raytheon were found amongst the debri. At the time, Human Rights Watch reported that “at least two air-dropped munitions penetrated the roof of the hall and detonated a few minutes apart.” At least 140 were killed, and 525 were injured.

While the response of the United States to the actions of Saudi Arabia, under this administration and those before it, has been confined to a mixture of either bureaucratic silence or mournful, yet deceptive neutrality, the government's material interests have been clear from the beginning: The road to war in Yemen is paved with U.S. munitions and direct military assistance. In the war on Yemen, coalition yets are refueled in the air by American planes and weapons provided by U.S. arms sales. A month after coalition strikes pounded a Médecins Sans Frontières hospital and destroyed a potato factory in 2016, then-President Obama stood before the United Nations General Assembly and stated that “[a]cross the region’s conflicts, we have to insist that all parties recognize a common humanity and that nations end proxy wars that fuel disorder.” This wasn't merely a display of imperial sanctimony but another show of American callousness; impenetrable, and unwavering.

The investigative authority of the Saudi-led military coalition—after tasking itself with probing the school bus attack in August—made an unambitious request in September that “coalition forces should initiate legal action” against those responsible. Pockmarks from air raids and cluster bombs—the latter of which are prohibited by the Convention on Cluster Munitions, which the United States and Saudi Arabia never signed—litter Yemen and further intensify conditions of human-made devastation. Saudi Arabia's “Decisive Storm” in Yemen is being fought by air, sea and land, with critical support from the United States, beyond simple logistics and weaponry. In May it was revealed that American Special Forces, which now operate in 70 percent of the world's countries, are assisting Saudi Arabia in a secret mission designed to help bring an end to the coalition's stalemate. In September, U.S. Secretary of State Mike Pompeo certified to Congress that “the governments of Saudi Arabia and United Arab Emirates are undertaking demonstrable actions to reduce the risk of harm to civilians and civilian infrastructure resulting from military operations of these governments.” Nearly one month later a coalition airstrike killed four civilians at a bee farm in al-Hudayda, Yemen’s fourth largest city.

Saudi Arabia and the United States are putting on a duplicitous show of regret and moderate assurance in order to undermine even the most short-lived occasions of public disapproval. Taking to The Washington Post, Chris Murphy, junior Democratic Senator for Connecticut and member of the Senate Foreign Relations Committee, coupled his denunciation of Saudi Arabia's actions in Yemen with the argument that has been used time and time again to undermine criticism of the country's actions: that the Kingdom is “an important counterterrorism partner,” one whose relationship the United States should not abandon. And yet, there is no dog and pony show that can distract from the whole of these crimes, each one climbing in ferocity. The apologies and investigations buy time between military operations and a tightening blockade that threatens to further isolate Yemen and destroy whatever infrastructure remains. So long as the war continues, without material consequences for both Saudi Arabia and its allies, the propaganda efforts will follow.