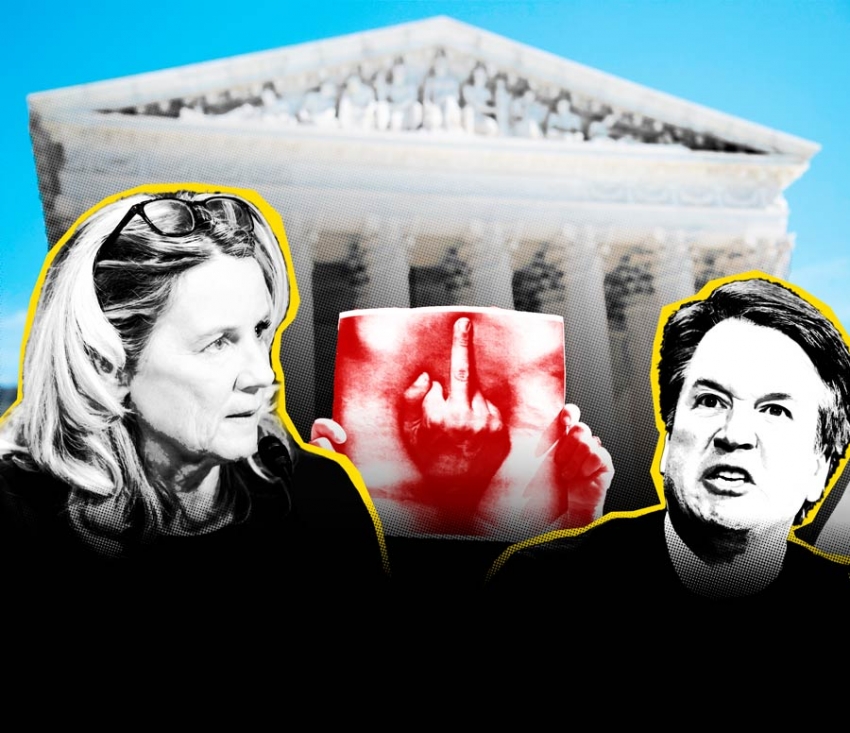 The Illegitimacy of the Ruling Class

Americans are losing faith in governance by the elite.

Reverberating through Ford’s statement, as in so many recent public acts of protest and testimony, is this tremble of hegemony fracturing.

Despite Christine Blasey Ford’s stirring testimony, an FBI investigation, thousands of protesters (hundreds of whom were arrested), petitions and phone calls from constituents, an elevator confrontation and a record-high disapproval rating, on October 6 the U.S. Senate confirmed Brett Kavanaugh’s nomination to the Supreme Court by a margin of two.

That evening, Kavanaugh was granted a lifetime appointment to a deeply undemocratic institution. He was confirmed by a legislative body that counts some votes more than others, giving the loudest voice (per capita) to the most sparsely populated states. The Senate’s majority vote represented a minority of Americans (44 percent). And Kavanaugh was selected by a president who lost the popular vote, a pedigree he shares with three of his esteemed colleagues: Neil Gorsuch, John Roberts and Samuel Alito.

It was, in other words, an egregious case of the system working precisely as designed. The framers of the Constitution imagined the Supreme Court, the Senate and the Electoral College to function as checks on the “tyranny of the majority”—in other words, to ensure white male landowners had the final say. Two centuries later, the women’s suffrage and civil rights movements expanded the franchise far beyond what the founders intended. But, thanks to unprecedented electoral spending by corporations and the wealthy, as well as rampant voter suppression—both of which were granted a constitutional green light by recent Supreme Court decisions—the Republican-led government has become increasingly unmoored from the people it ostensibly represents. For decades, the party has moved rightward, embracing an explicitly white, male, native-born, wealthy, heterosexual identity politics paired with a program of severe disinvestment and deregulation. Donald Trump is the apotheosis of this class vision—and has revealed it in all its cruelty.

Increasingly we see power stripped naked, no longer protected by the veneer of legitimacy. Legitimacy, or what Italian Marxist Antonio Gramsci called hegemony, is always provisional. Rather than coercion, it requires voluntary submission, which lasts only as long as it is consented to. This naked power was personified in Kavanaugh’s sputtering rage at being called to account. A similar lifting of façades is apparent in white supremacist rallies, in the right-wing evangelical alliance with Trump that makes no pretense of his piety, in the conversion of the Environmental Protection Agency into an arm of the coal and oil industries, and in deep tax cuts for the wealthy alongside a staggering outlay for military expenditures. The emperor wears no clothes.

Conversely, we also see the hollowness of elite claims to a lost legitimacy that was never truly rooted in a popular mandate. Establishment figures, from Hillary Clinton to an anonymous member of Trump’s own cabinet, make compulsive appeals to a lost bipartisan comity and the principles of truth, reason and fairness that supposedly governed American politics before the current administration. Claiming to be part of the #resistance, these elites nostalgically yearn for the moderating force of norms and institutions. But for many Americans, pre-Trump America is nothing to be nostalgic about. It seems that these brave martyrs suffer from a historical amnesia extending from this nation’s bloody founding to Jan. 19, 2017.

As power and legitimacy become untethered, it has become more and more untenable for establishment institutions to maintain the illusion of distance from violence and domination. In theory, the military and police have the right to mete out violence to protect law-abiding citizens from the threats posed by “enemies, foreign and domestic,” as the U.S. Army’s Oath of Enlistment puts it. It’s not murder when the police kill someone, or terrorism when the state drops a bomb, the logic goes.

But that logic is cracking. A seemingly endless War on Terror, rampant police brutality and sprawling mass incarceration have made the distinction between legitimate and illegitimate violence increasingly difficult to maintain. Through those cracks, it’s revealed that the state often uses violence for an entirely different reason: to shore up the class hierarchy. In the relentless search for profits and productivity, capitalism inevitably creates “surplus populations” of unemployed people.

These are in turn seen as a threat to the social order—and made the target of policing and incarceration. The results are sometimes deadly. In 2014, Eric Garner was choked to death while being arrested on suspicion of selling loose cigarettes. The wealthiest, meanwhile, enjoy the protection of their property and the enforcement of their business contracts, while their own crimes go unpunished. This pact of elite impunity is evident in the 2008 financial crisis, in the routine theft of workers’ wages, and in the rampant sexual assault perpetrated by male bosses that #MeToo has finally subjected to public scrutiny.

This was the source of Kavanaugh’s outrage: However fleetingly, the hearing subjected him to the rule of law. To him, therefore, it was a “grotesque and coordinated character assassination” that “destroyed … my good name.” In other words, it was an affront to his status in a hierarchy he expected his peers in the Senate to protect. The Kavanaugh hearings lifted the veil on how ruling-class power is enacted, reproduced and given the aura of legitimacy through both state institutions and elite organizations: the Ivy League, the Serious Men commentariat, the Supreme Court. In his testimony to the Senate, Kavanaugh brought up Yale repeatedly. You might say he has a lot of class character.

Christine Blasey Ford’s testimony served as a window into what Corey Robin calls “the private life of power.” In Commonweal, writer John Gehring described his prep school football team chanting, after a loss to a mostly black school, “That’s all right, that’s okay, you will work for us someday!” This socialization, in all its valorization of hierarchy and its intimate entanglement with violence, produces the future leaders of a state built to preserve class, gender and racial domination.

The state, however, is by no means monolithic. All states, and particularly liberal democracies, are a terrain of struggle between different groups, in which social movements of the exploited and the oppressed can contest or even capture power. The events surrounding Kavanaugh’s appointment were enmeshed in an unusually frank conversation about sexual assault, and gave new momentum to an increasingly militant and rebellious feminism, one that sees patriarchy as part of a regime of social and economic oppression. Reverberating through Ford’s statement, as in so many recent public acts of protest and testimony, is this tremble of hegemony fracturing.

The rallies against Kavanaugh’s confirmation were only the most recent mobilization to target the American social order. Others include Occupy Wall Street, Fight for $15, Black Lives Matter, Standing Rock, protests against the travel ban and Trump’s attempted repeal of DACA, #AbolishICE, #RedforEd. Woven through these has been the renewed salience of tactics and ideas with long histories but, until recently, scarce appearances in the American political imagination: the strike, anti-fascist confrontation, sanctuary movements, socialism.

Some of these mobilizations resulted in concrete victories, such as higher wages, increased school funding and the election of unabashedly left-wing candidates. Others have not—though they surely contributed to individual and collective radicalization, and strengthened the activist networks that are necessary to sustain movements through the inevitable moments of defeat or phases of abeyance. As a totality, they have chipped away at the legitimating ideologies that give cover to inequality, racism and patriarchy.

Fracture, however, is not a sufficient prerequisite for social change. In the context of lives stretched thin by economic precarity, political instability can also be met with apathy. When you are working two jobs to make ends meet, it’s hard to find energy for political engagement or to discern a meaningful difference between candidates when government always seems to provide more of the same. One can argue that the prior hegemonic order was sustained less by widespread faith in its virtue than by widespread disengagement, a resignation that elites are all too happy to abet.

The future is uncertain. Will the disaffected find the collective agency, capacity and leverage to push in an emancipatory direction? Or will elite forces reconsolidate around an authoritarian-repressive social order? The latter is on full display in several countries, from Hungary to Brazil. In the context of the planetary havoc being wreaked by global capitalism, the stakes are not only high but existential. We need to orient to these fractures and contradictions. They are openings and avenues through which processes of radicalization potentially unfold. The emancipatory path requires dedication and struggle, and the terrain is uneven. And we on the Left are still finding our organizational and strategic footing. But the moment is auspicious for transformation.

Thea N. Riofrancos is assistant professor of political science at Providence College and serves on the steering committee of the Democratic Socialists of America’s ecosocialist working group. Her forthcoming book is Resource Radicals: From Petro-Nationalism to Post-Extractivism in Ecuador.