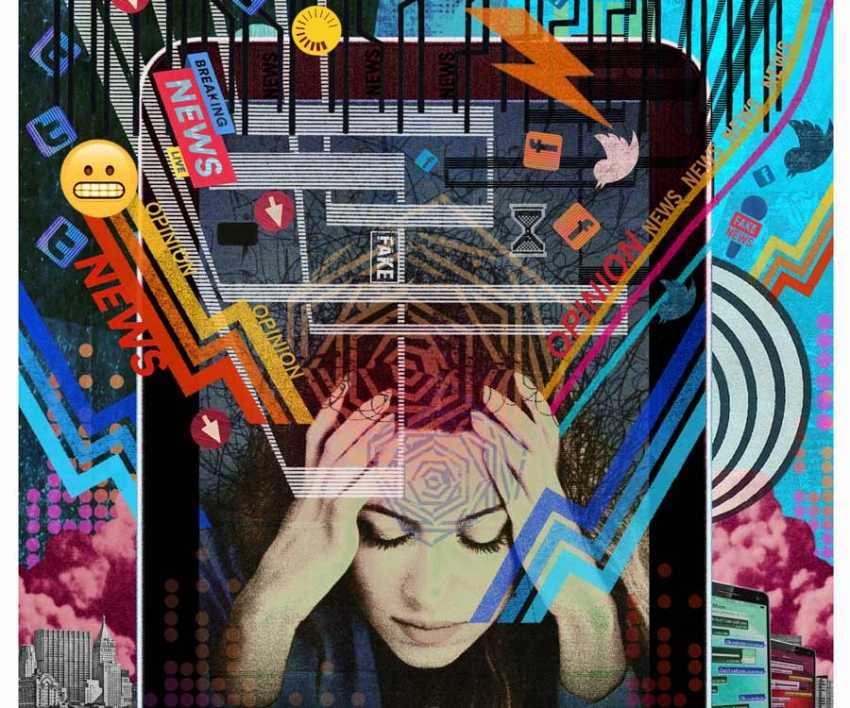 The case for taking a break from the news.

Access to information via technology was intended to help us think, to make us smarter and wiser. Instead, we have lost the ability to discriminate.

I used to have a recurring argument with a friend, who told me he stopped paying attention to the news. “Don’t you think you should know what’s going on in Syria? Or Yemen? Or about the failing public school system in Chicago?” “Why?” he would reply. What would he be able to do about it? How does knowing about these issues help?

My friend was not ignoring the news so he could live a carefree life and enjoy a glass of expensive scotch without having to be bummed out by the day’s atrocities. He was, he argued, ignoring it so he could work on his dark and funny novels. He needed the respite from the onslaught of news so he could access a greater truth about how humans, by their nature, commit atrocities, rather than what specific geopolitical development led to a particular atrocity. The news was the symptom of larger issues, and it distracted him from the source.

I am leaning more in my friend’s direction after reading Franco “Bifo” Berardi’s latest book, Breathing: Chaos and Poetry. Berardi believes that we are suffocated by the noise of daily life, by the stream of opinion and news emanating from our many devices. It leaves us little opportunity to stand back, take a breath and gain perspective.

Access to information via technology was intended to help us think, to make us smarter and wiser. Instead, we have lost the ability to discriminate. Reality television looks like politics, which looks like social media, which looks like war footage, which looks like superhero movies, and so on. Rather than helping us respond to the dangers that threaten society’s survival—environmental collapse, endless war, the worldwide rise of the nationalist Right—the media and its followers spend their days parsing the latest Trump tweet.

Berardi, an Italian Marxist philosopher who has been documenting the dehumanizing shift to postindustrial capitalism for decades, writes, “We no longer know what is relevant and what is irrelevant in our surrounding environment, this is what we call ‘chaos’: the inability to attribute meaning to the flow, the breakdown of our framework of relevance.”

Berardi calls out two crutches in today’s culture that we use to navigate the chaos of information overload: opinion and identity. Watching the news can be overwhelming, and to filter it, we declare an opinion rather than venture to understand the source of the problem. To understand, after all, requires that we confront our powerlessness. Thus, our opinion of the latest leftist candidate being trumpeted as our savior or the latest binge-worthy Netflix series is easier to express than an understanding of the larger complexities at play.

Take the hashtag that has emerged following the #MeToo movement, #BelieveWomen. Activists insist all women making accusations of harassment or abuse should be believed because they have no motivation to lie. This ignores the history of white women’s accusations being used to justify lynching men of color, the men and women who went to jail on the basis of fictional accusations of sexual abuse during the Satanic Panic of the 1980s and 1990s, the way our justice system is structurally inadequate to deal with intimate violence and the way that laws and punishments advocated by carceral feminists have contributed to the current prison overpopulation problem.

Often, we form our opinions out of knee-jerk allegiance to a specific identity, such as a political party, or out of a desire to position ourselves either as part of the consensus or as a deliberate contrarian. Our public-facing identities have become more and more like opinion, a series of external markers created especially for public display, rather than an internal philosophical development. Because we live in a consumerist society, our opinions are often considered an extension of our public selves, and we show off our opinions in the same way we show off our boozy brunches and beachy vacations. Opinions become as fashionable, and then as passe, as avocado toast. Leftists use Twitter and Instagram to broadcast this highly curated life back to the world: all these white girls making sure everyone knows about how “important” they think Crazy Rich Asians is, all these leftist guys talking about punching Nazis.

And we fall for it. When a public figure displays wokeness, usually just parrotting some line developed by a savvy PR firm, they are celebrated. (All a male celebrity has to do to guarantee coverage in women’s media today is declare himself a feminist.) When a public figure voices an unpopular opinion, they are pilloried.

Under this framework, we mistake opinion for insight and taste for moral character. Berardi does not unpack this, but others have. The essayist Pankaj Mishra has suggested one of the reasons President Barack Obama’s more destructive policies were ignored or forgiven by the East Coast intelligentsia was because he shared their taste. He read literary authors like Jhumpa Lahiri and Ta-Nehisi Coates; he listened to Kendrick Lamar and Jay-Z, just like the leftist commentators. Identifying with his taste, then, meant identifying with him, period. How could a man who likes the same books as me be committing war crimes in Pakistan and facilitating famine and genocide in Yemen and Syria?

Berardi wants us to let go of the static identities and the set opinions we cling to—to toss away these crutches and face the chaos head-on. He does not offer a prescription for dealing with said chaos. He provides no step-by-step guide that starts with deleting Twitter from your phone, nor does he suggest this would, in any way, make you happier or give you better orgasms. But, he argues, confronting the chaos is required if we are to reverse “four decades of neoliberal reform, [which have] unleashed an ethical apocalypse.” If issues such as environmental devastation and income inequality are ethical crises, the antidotes are empathy and universality, “the two roots of ethical behavior.” And to get to those roots, we need to look beyond surface-level opinions and superficial identities and start finding shared meaning of a deeper kind.

Berardi turns to the Romantic poems of Friedrich Hölderlin and the prophetic dystopias of novelist Octavia Butler as examples of works that ignore the topical to engage with the universal elements of human nature. Rebuilding empathy and universality is what art does. Yet, because art often shows us the ugly, underlying problems humanity is facing, we use opinion to protect ourselves—from art as well as chaos. As Berardi puts it, “Empathetic sensibility … is an open door to the inflow of surrounding suffering.” But without art, we will never find the rhythm in the chaos that we all so desperately need.

Jessa Crispin is the founder and editor of the magazines Bookslut.com and Spoliamag.com. She is the author of The Dead Ladies Project, published by The University of Chicago Press, and The Creative Tarot, published by Touchstone. She has lived in Kansas, Texas, Chicago, Ireland, Berlin, among other places. She currently lives in Baltimore and Berlin.