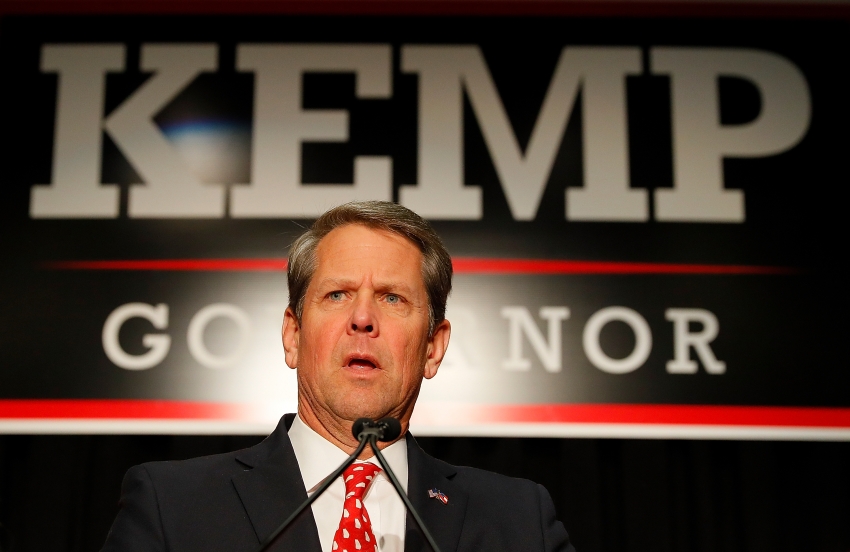 In Georgia, Brian Kemp Put on a Master Class in Voter Suppression

Secretary of State Brian Kemp’s shameful voter suppression tactics led to 53,000 registrations being put on hold, 70% of whom were African Americans.

What Kemp did in Georgia was perhaps the most shameless display of voter suppression we've seen in decades.

As of 8am today, November 7, the Georgia governor's race remains extremely close, with GOP candidate Brian Kemp holding onto a slim lead over democrat Stacey Abrams. While it seems likely that he will eke out a victory in the state, the way he achieved this victory involved a style of voter suppression often utilized by despots and dictators.

Brian Kemp is currently Georgia's secretary of state, which means he is in charge of the election he's running in. Given the obvious conflict of interest, one might assume that Kemp would resign or, at the very least, attempt to separate himself from the election so as to not appear as though he is using his power to attain victory. One would be dead wrong in that assumption. Instead, Kemp decided to go full-on autocrat, refusing to acknowledge any potential conflicts of interest and barreling forward using his office as a vicious tool for voter suppression.

Last year, Kemp purged over half-a-million voters from the rolls claiming that they had moved from the state. An investigation by Greg Palast and led by CohereOne's John Lenser found that 340,134 people hadn't moved. This tactic, known as “purge by postcard,” is often applied by GOP leaders attempting to limit voter participation. Palast details the process in Truthout, but the basic idea is simple: You receive a postcard in the mail, a postcard that could easily be confused with junk mail, and if you do not fill out that postcard and return it, you're purged from the rolls—that's it. The Truthout piece also points out that the “purge by postcard” process—and this will surprise no one who's been paying attention—tends to result in many African Americans being purged.

But Kemp didn't stop there. To ensure that Georgia wouldn't be the first state in the country to elect an African-American woman as their governor, he announced November 4, with zero evidence, that the democrats had attempted to hack the state's voter registration system and that his office would be opening an investigation. He posted it front-and-center on the state department's website under the headline: “After Failed Hacking Attempt, SOS Launches Investigation into Georgia Democratic Party.” Following the announcement, many Georgians called for Kemp to resign, but he again refused.

This wasn't the first time Kemp said Georgia's voting system had been hacked. In December 2016, Kemp said the Department of Homeland Security attempted to hack into Georgia's voting database. A federal review found that no such hacking occurred.

Even though Kemp's most recent claim of hacking was unfounded, one would think he would do everything in his power to secure the voting system in his state for the future. Again, one would be dead wrong. Georgia's election security is one of the worst in the country, and yet Kemp declined help from the Department of Homeland Security on this front.

Kemp’s attempts to suppress voters didn’t stop there. He also tried to use what's known as the “exact match” requirement which would purge a voter for inconsistencies such as a misplaced hyphen, a difference in an accent mark, or the absence of a middle initial. In other words, everything needs to match exactly on all of your forms or you can't vote. This led to 53,000 registrations being put on hold, 70% of whom were African Americans.

On election day there were reports of three-hour-plus wait times as well as machine malfunctions, and a lack of power cords to run the machines in Snellville, Georgia, which has a higher than average African-American population.

Kemp didn't even bother to hide any of his actions. He used his office to commit voter suppression through propaganda, loopholes and outright lies. He put on a disgraceful masterclass in voter suppression and his legacy as governor should be forever tainted by the well-worn, white supremacist tactics he employed.

Astra Taylor: Bernie Sanders’ Exit Is an Indictment of Our Broken System—Not His Campaign