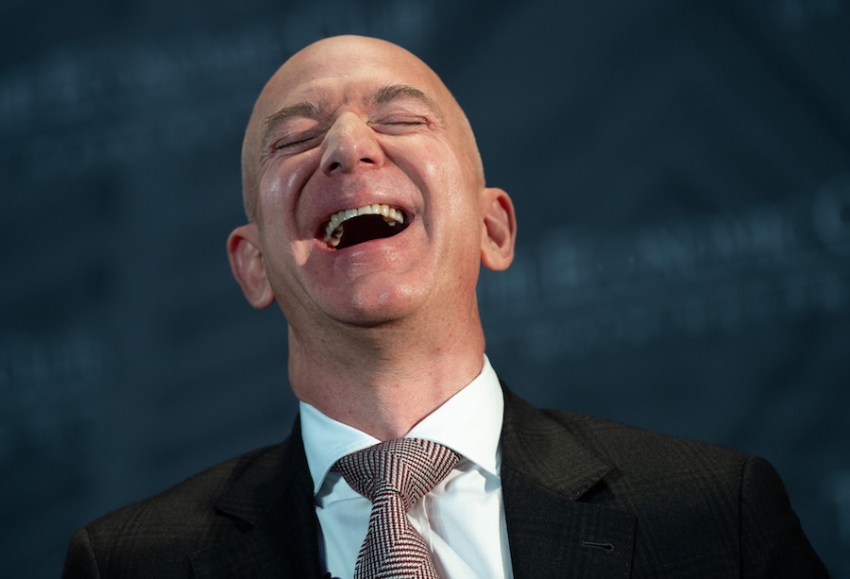 The HQ2 Scam: How Amazon Used a Bidding War to Scrape Cities’ Data

The news of the lucky winners—New York and Virginia—exposes the bad faith of Amazon’s much-hyped search.

Those bids didn’t just include the size of the bribe; they included a wealth of important data about plans for transportation, housing, education and workforce development. Amazon now has a treasure trove of non-public information about America’s future.

UPDATE: Amazon has formally announced that it will locate two new corporate outposts, which it is referring to as its “headquarters,” in Long Island City, New York and the Crystal City section of Arlington, Virginia (which it has arbitrarily decided to call “National Landing”). The details of the arrangements are as bad as expected.

Amazon is set to receive well over $1.5 billion, for the Long Island City facility. That includes $48,000 per job created through New York State's Excelsior Program and a $325 million cash grant from Empire State Development for occupying office space. Amazon also stands to receive up to nearly $1 billion from New York City's Relocation and Employment Assistance Program (REAP), in addition to other as-of-right incentives from New York City's Industrial and Commercial Abatement Program (ICAP), a Payment In Lieu Of Tax (PILOT) program where the city substitutes its funding for Amazon's property taxes. State Senator Mike Gianaris and New York City Council member Jimmy Van Bramer, who represent the area, put the expected total at $3 billion. “We are witness to a cynical game in which Amazon duped New York into offering unprecedented amounts to one of the wealthiest companies on Earth,” they said in a statement.

The Virginia site could yield Amazon another $573 million in subsidies, and an additional $200 million if they expand, according to the memorandum of understanding. This money comes in a cash grant of $22,000 per job, and a portion of the growth from hotel taxes in the city of Arlington. Under the contract, Amazon got a commitment from the state for “regulatory flexibility” that will lighten regulations on the company. Amazon also retains the right to seek a protective order if any entity seeks more information about the deal.

In all, this is a multibillion-dollar haul to place offices in two locations where Amazon already had a presence and would have to expand into if it wanted to maintain status as a global company. It's a fleecing of billions of dollars that could have been put toward improving quality of life in these areas, attracting companies to the desirable locations. Instead, New York and Virginia handed over a bribe.

Over the past year, mayors and governors nationwide have fallen over themselves to offer cash bribes to Amazon to court its second headquarters, billed as a “full equal” to its Seattle home base. Two hundred and thirty-eight cities submitted bids to attract HQ2, as it was quaintly known, stuffed with billions of dollars in government subsidies and detailed plans for how to accommodate Amazon employees’ housing and transportation needs. Some of these bids were borderline absurd: Chicago offered Amazon the income tax receipts from its own staff.

Practically every other multinational corporation in the world opens branch offices in other cities without fanfare. Google’s offices in Berlin, London and New York are not considered second or third headquarters – they’re just regional offices. Google is reportedly expanding its New York footprint, in fact.

HQ2 was supposed to bring  50,000 jobs and $5 billion in investment to the lucky winner. But then the New York Times broke the story this week that Amazon will place offices in Crystal City, Virginia—home of the Pentagon—and Long Island City, New York. That means the promised jobs and investment will be cut in half. Will the subsidy packages be halved as well? We have no idea, because the HQ2 bids from Virginia and New York City are officially a secret.

If it was impossible for one company to have two headquarters, it’s really impossible to have three. These are just regional offices. In fact, they’re extensions of the offices Amazon already have in the New York and Washington metro areas. The two cities have the tech-savvy workforce, transportation hubs, and education pipelines Amazon asked for in its solicitations.

They are also critical to Amazon’s not-at-all-secret quest for world domination. Amazon thrives on government contracts and close collaborations with defense and intelligence operations, so D.C. is a natural fit. It’s also where Amazon CEO Jeff Bezos just bought a giant mansion in which to hold salons, and the local newspaper. Bezos also has a home in New York, which is the center of the corporate universe, home to the head offices of Amazon suppliers and partners, as well as the nation’s advertising mecca, a field that Amazon has been aggressively pushing into lately.

Cities of the stature of New York or Washington have been pulling away from the rest of the country economically for years. Of course Amazon would need to have personnel there. Amazon knew that creating the pretense of a bidding war would pressure major cities to offer lavish packages, running up the payouts the company could extract. But we should raise the question: Why would any politician give away ten cents in subsidies to bring in a company that they know will set up shop anyway?

That’s a question Amazon has been able to hold off for years. Since 2000, Amazon has been awarded subsidy deals worth at least $1.6 billion for data centers and warehouses, as it promises rapid shipping everywhere and constantly expands its cloud computing service. This number has been accelerating over time as Amazon has grown and made more promises; $230 million has come in just in 2018. Amazon just announced its 14th warehouse in the Inland Empire of California alone.

As Prime shipping goes from two-day guarantees to one-day to a matter of hours, Amazon will need to store inventory in every corner of the country. Yet it continues the lucrative ploy of getting cities desperate for jobs to vie with one another for infrastructure Amazon has to build anyway. Public officials continue to back up the truck for the world’s richest man and his company, for no discernible reason.

But the biggest suckers on HQ2 aren’t New York and Virginia; it’s the other 236 cities that bid on a headquarters they were never going to get. Those bids didn’t just include the size of the bribe; they included a wealth of important data about plans for transportation, housing, education and workforce development. Amazon now has a treasure trove of non-public information about America’s future, in addition to knowing how much cash cities are willing to part with to land an Amazon facility. And it got all that, along with a giant PR benefit from the bidding war, for free.

If you knew a city was going to build a road in a particular place, you could make a lot of money buying up the real estate there. Imagine that on a national scale and you can see how Amazon will grow far wealthier from the data it collected than even the raw dollars extracted from HQ2’s big winners. In fact, this was the real reason Amazon orchestrated the whole charade.

Amazon can now go back to every city that put in a bid and offer a warehouse or data center or satellite office for one of its 16 subsidiary companies. The company will have significant leverage in those negotiations, because the other side has already made an initial offer. Just as important, Amazon can set up operations with the foreknowledge of what cities have divulged to them. It can build its convenience stores or bookseller outlets where cities have planned rapid development and population growth. It can locate its warehouses where a new highway expansion is imminent. It can shift knowledge jobs to areas where universities will soon be built and high-tech education projects funded.

It can even potentially sell this data to other companies who long for similar deals, or at least start up a new business line in negotiating deals between companies and municipal governments.

Monetizing of this new data trove will yield untold billions of dollars in value. It will also embed Amazon deeper and deeper into American life, committing politicians at the state and federal level to become human shields for the company. For example, no senator from New York or Virginia, with Amazon in its backyard, will want to speak too loudly about Amazon’s monopoly attempts. And no mayor or city council member, eager to secure that next warehouse, will have much to say either.

We already know that Amazon runs on data—from its customers, its suppliers, its cloud computing clients—to increase its power. It can anticipate what shoppers want from the purchasing history. It can see what third-party products are selling on the site, and replicate them. Now it can make money off of knowledge about the future of cities. There was no reason for elected officials to fall for this game. But they have been lured by the promise of jobs—in many cases a false promise, as studies show that corporate welfare subsidies are usually not worth it—into handing a goldmine over to Amazon.