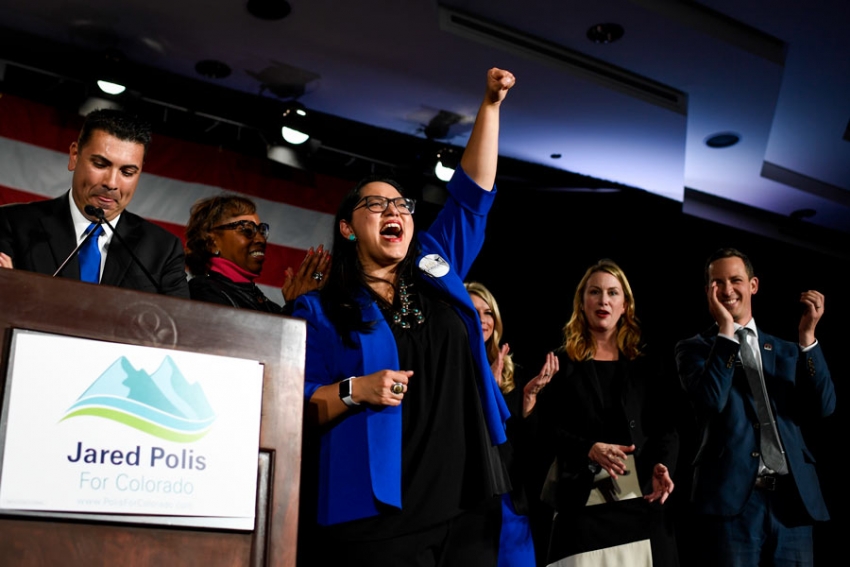 Democrats Must Do More To Turn Out Latino Voters in 2020

“I do think Democrats have to be bolder in defending immigrants.”

In the weeks before the election, President Donald Trump tried to stoke fear over the so-called migrant caravan, a group of 3,000 displaced Central Americans heading north through Mexico toward the U.S. border. It was part of a transparently racist attempt to rile up his base. But Latino advocacy groups were ready to counter, using Trump’s own views against him in the final push of un-precedented voter mobilization efforts: Latino early voting participation increased by 174 percent compared to the 2014 midterm, and Latinos contributed to key victories in several states.

Spokespeople for these advocacy groups tell In These Times that Democrats cannot take such turnout for granted. Now, Democratic legislators must advance and defend a progressive immigration agenda.

Latinos, many of whom live in battleground states such as Florida and Arizona, represent an increasing share of the electorate, 12.8 percent. And they tend to vote Democratic: An estimated 69 percent of Latinos voted for the Democratic House candidate in 2018.

Still, Latinos have historically had the lowest turnout rates of any demographic. Latino engagement groups point to at least three causes: Political outreach and investment has been paltry and culturally inappropriate; many foreign-born Latinos come from countries where civic engagement is low, and often transfer their mistrust of previous governments; and most U.S. Latinos are young, and young voters tend to have low turnout rates.

An election-eve survey of congressional battlegrounds by the polling firm Latino Decisions found that, for white voters, border security ranked as the second priority behind healthcare—perhaps revealing why establishment Democrats like Nancy Pelosi failed to respond boldly to Trump’s xenophobia. For Latino voters, however, border security ranked low, while immigration reform and protecting Deferred Action for Childhood Arrivals (DACA) were second behind healthcare.

Immigration proved a powerful tool to drive Latino turnout. Mi Familia Vota, for example, released an English and Spanish ad campaign in five states critiquing the president’s “slaps in the face.” The group registered nearly 90,000 voters in Arizona, California, Colorado, Florida, Nevada and Texas, and knocked on more than half a million doors. According to Pew, Latino voter registration in Florida in 2018 rose 8.4 percent over 2016—nearly double the increase between 2012 and 2014. Mi Familia Vota alone registered 32,000 voters in Florida—nearly the same number registered during the 2016 presidential election, according to the group’s executive director, Ben Monterroso. It’s not just registering Latinos that is crucial, he says, but also re-registering, since they tend to move often.

The Colorado Immigrant Rights Coalition (CIRC) Action Fund had more than 18,000 conversations with low-propensity voters of color in swing districts about Trump’s immigration policies. Every candidate CIRC Action Fund endorsed was elected, including the Democratic challenger against Rep. Mike Coffman (R-Colo.) in a race that many foreign-born voters considered a referendum on the Trump administration’s immigration policies. Coffman had tried to distance himself from Trump’s rhetoric and tout his connection to the district’s immigrant communities, but had a consistently anti-immigrant voting record. He lost by 9 points. “We kind of proved that having a hardline stance against immigrants does not work,” says Juan C. Gallegos, CIRC Action Fund managing director.

In Pennsylvania, for instance, a survey of roughly 1,000 registered voters showed that Republican gubernatorial candidate Scott Wagner’s ad demonizing the migrant caravan not only failed to mobilize his supporters, but increased turnout for his opponent among both liberal-leaning and moderate women. Wagner barely garnered 40 percent of the vote.

Gallegos and Monterroso agree that outrage over family separations and detention at the border, along with the desire to protect DACA, were key in mobilizing Latinos and will remain a focus of get-out-the-vote efforts for 2020.

Tania Unzueta, policy director at Mijente, cautions that immigration isn’t the only issue that mobilizes Latinos. Mijente had conversations with 150,000 Latino voters in support of Stacey Abrams in Georgia. For many, she says, state-based issues, such as penalties for driving without a license, were critical.

Organizers also encountered Republican-voting Latinos about a third of the time, according to Unzueta, and found it difficult to engage with them. These voters often denounced Abrams’ positions on abortion and marriage equality while accusing her of being “socialist.” Unzueta says she heard repeatedly that Abrams is “not doing enough” to protect young women from trafficking rings. “It sounded like a well-learned talking point.”

That being said, Unzueta tells In These Times, “I do think Democrats have to be bolder in defending immigrants.” She says that in 2020, Democrats should push the agenda beyond what’s possible to do under Trump. “The calls to abolish ICE [Immigration and Customs Enforcement], for example, are not done naively,” she says, but advance a vision for a post-Trump immigration policy.

This sort of boldness, however, has not been the norm for Democratic legislators. Even the Congressional Progressive Caucus backed away from demands to abolish ICE less than a week after the election, with caucus leaders indicating that they’ll focus on jobs and health-care in their districts instead.

It’s time for Democrats to grow a spine, and learn from the successful playbook of Latino voter engagement groups.