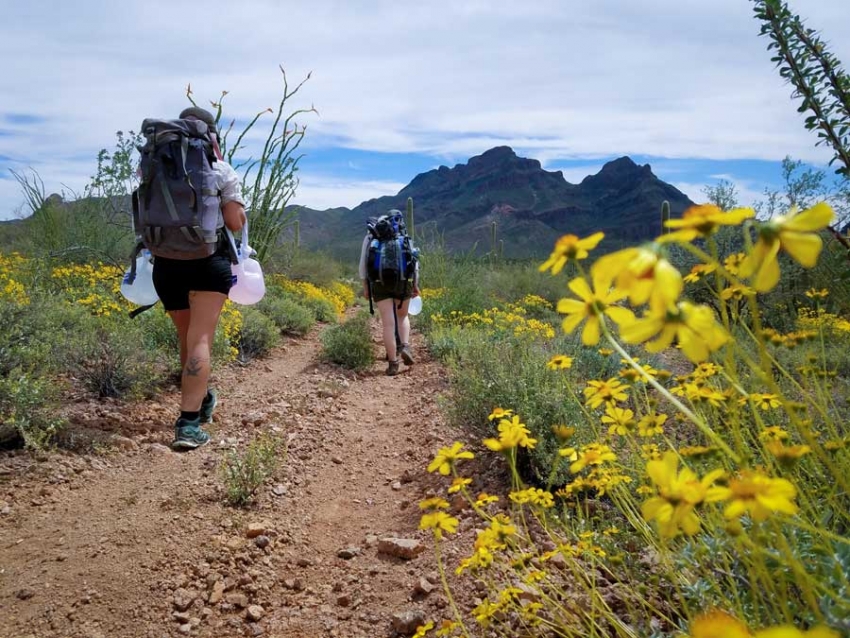 Volunteers with humanitarian aid group No More Deaths leave water and food in the desert for migrants, a federal crime. (Photo courtesy of Carrot Quinn)

Volunteers Convicted for Leaving Water Out for Migrants

In total, the U.S.-Mexico borderlands have seen more than 7,000 fatalities (a conservative estimate) since 1994.

TUCSON, ARIZ.—In a crowded courtroom January 15, defense lawyer Chris Dupont asked Michael West, a U.S. Fish and Wildlife officer at the Cabeza Prieta National Wildlife Refuge in the Arizona desert, if he was aware that border crossers were dying in the refuge. Had he found bodies himself? “Yes,” West affirmed. Pressed for an exact number, West said he didn’t know.

Madeline Huse, a volunteer with the Arizona-based humanitarian aid organization No More Deaths, has a clearer memory of the bodies she’s seen along the border. She testified two days later that, in just one month of volunteering in 2016, she and those with her encountered more than a dozen people’s remains. Expert witness Ed McCullough, a retired geologist who maps migrant routes in the desert, described Growler Valley in the Cabeza Prieta refuge as a “trail of deaths.”

On Aug. 13, 2017, in the Growler Valley, West stopped Huse and fellow volunteers Natalie Hoffman, Oona Holcomb and Zaachila Orozco as they were leaving food and water for migrants during one of the deadliest summers on record. By year’s end, the remains of 32 people would be found on the refuge.

Charged with entering a national wildlife refuge without a permit, abandoning property and (in the case of Hoffman, the driver) operating a vehicle in a wilderness area, the four were facing up to six months in prison. Dupont’s defense team argued that the volunteers’ sincerely held values compelled them to aid those who were dying, and that they did not know this was a prosecutable offense.

In total, the U.S.-Mexico borderlands have seen more than 7,000 fatalities (a conservative estimate) since the Clinton administration first deployed the current border enforcement strategy of deterrence in 1994. More walls, more surveillance technologies and more armed agents (from 4,000 in 1994 to 21,000 in 2014) prevented access to the much safer crossing areas in and around cities such as El Paso, Texas; Nogales, Ariz.; and San Diego—pushing people to take longer routes through desolate areas, like Cabeza Prieta.

According to anthropologist Jason De León, who directs the Undocumented Migration Project, “There’s no way you can carry enough water” to make the six-day hike through the desert. You would need 10 gallons, he says, and “the most you can possibly carry is four.”

It was in this context that No More Deaths formed in 2004, to provide direct aid and raise public awareness of the border death crisis. Around the same time, the Border Patrol opened up Camp Grip, a base on the Cabeza Prieta refuge, and began to work more closely with Fish and Wildlife officers like West. Border Patrol’s F-150 trucks and ATVs began to routinely crisscross the protected wilderness, and the agency installed a network of cameras. It was one of those cameras that alerted West to the No More Deaths volunteers’ white pickup truck in 2017.

Unaware they’d been spotted, the four volunteers parked the truck and hiked out into the desert, carrying heavy backpacks full of water and cans of beans into the unbearable 110-degree heat. They couldn’t sit down to rest; the ground was sizzling hot. Jumping cholla cacti punctured their shoes, and they stopped several times to extract the thorns. When they reached the drop-off point, they found clothing, shoes and backpacks left behind by border crossers. “You feel someone else’s presence,” Orozco testified.

When West got in his patrol car to track down the pickup, he may not have realized he was about to be a key actor in the Trump administration’s escalating crackdown on humanitarian assistance on the border. In June 2017, Border Patrol had raided the No More Deaths camp in Arivaca, Ariz., and arrested four undocumented border crossers who were receiving medical treatment. A month later, the wildlife refuge (with input from the Department of the Interior and Department of Defense) amended the permit stipulations with a new paragraph prohibiting people from leaving food and water—intentionally targeting No More Deaths.

West waited at the white pickup for the volunteers, questioned them and asked them to leave the refuge. He confiscated the cache of water jugs and beans the volunteers had dropped off and took the crates to the refuge office. There, he photographed the “property,” lining the crates up side by side as if he had busted drug runners. In December 2017, the Trump Justice Department would use his report as evidence in filing charges.

On January 18, Magistrate Judge Bernardo Velasco found the four volunteers guilty on all counts, rebuking them for defiling a “pristine nature” (no mention that Border Patrol roads have been decried by environmental groups). The trial was the first of four No More Deaths cases to be adjudicated this year. One defendant, Scott Warren, faces felony charges and up to 20 years in prison for providing medical assistance.

“I didn’t understand,” said Orozco during her testimony, “that humanitarian aid was criminal.”

Todd Miller is the author of Empire of Borders: The Expansion of the U.S. Border Around the World, Storming the Wall: Climate Change, Migration and Homeland Security and Border Patrol Nation: Dispatches From the Front Lines of Homeland Security. He has written on border and immigration issues for the New York Times, Al Jazeera America, and elsewhere. You can follow him on twitter @memomiller and view more of his work at his website.