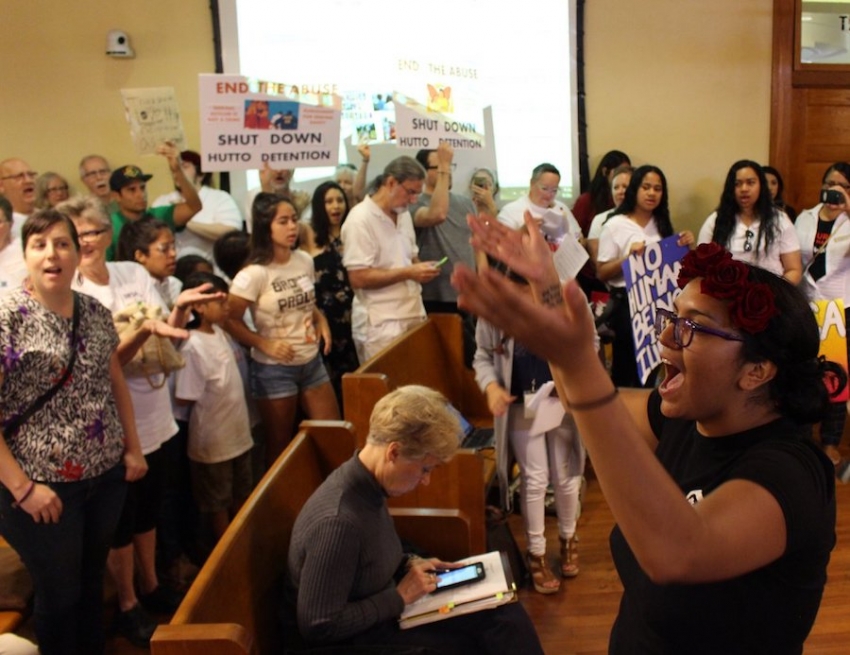 Texas Activists Thought They’d Kicked ICE Out of Their County. Then a Secret Deal Happened.

An Austin suburb has become a test of whether ICE and private prison companies can thwart the movement to close local detention centers.

After Grassroots Leadership began making weekly visits to county meetings, reading letters from detained women in the facility, commissioners decided that they didn’t want family separation on their conscience.

Last June, activists in suburban Williamson County, Texas, had reason to celebrate. County commissioners had voted to terminate a contract with ICE for the privately-run T. Don Hutto Detention Center, a CoreCivic-run women’s facility for asylum seekers that has long been accused of rampant abuse. While there was no guarantee that the facility would close, it felt like county officials were finally listening to local residents and former detainees, and signaling an end to detention-for-profit practices in their community.

But Hutto remains open, thanks to a quiet agreement between ICE and CoreCivic. The county, and the city of Taylor where the detention center resides, have been indifferent while detainees continue to be locked up. And activists are appalled.

“We’ve been fighting for a long time, and we thought we were finally going to shut the place down after a decade,” says Bethany Carson, immigration policy researcher and organizer with the Austin-based organization Grassroots Leadership, which has led efforts to close Hutto. A planned rally on Thursday at the Taylor City Council presents the next stage in this seemingly endless battle.

The frustratingly hard-to-kill detention center represents a setback in the growing momentum of movements targeting private corporations that enable cruelty to immigrants. Earlier this year, Wells Fargo announced it would limit its lending to private prisons, which rely on the financial industry for cash flow. In February, the American Federation of Teachers union recommended to its pension funds to steer clear of private equity firms and asset managers who profit from mass incarceration. Pending legislation in California would force the state’s two large public pension funds, the Public Employees’ Retirement System (CalPERS) and State Teachers’ Retirement System (CalSTRS), to divest from private prisons.

Williamson County is a fast-growing suburb of Austin with changing demographics; nearly one-quarter of residents are now Latinx. That shift drove activist fervor around closing the Hutto facility, a women-only detention center with around 500 beds.

In February 2018, Laura Monterrosa, a detainee at Hutto alleged sexual assault at the hands of a prison guard and was put into solitary confinement after speaking out. After she was released later last year, she became a powerful spokesperson for the need to close the facility. The fact that Hutto was holding women separated from their families and children after seeking asylum at the border, in addition to claims of sexual abuse and medical neglect, intensified the demands.

“Our organizing team started putting pressure on county commissioners, saying this is your contract,” says Bob Libal of Grassroots Leadership, which has advocated against mass incarceration and prison profiteering for decades. “What is happening at Hutto is in your hands.” After Grassroots Leadership began making weekly visits to county meetings, reading letters from detained women in the facility, commissioners decided that they didn’t want family separation on their conscience. They declared that the intergovernmental service agreement (ISGA) with ICE to let CoreCivic run the facility was not a core function of the county, and they said the contract would expire at the end of January.

Yet when the deadline rolled around, the facility did not close. ICE spokeswoman Nina Pruneda, told KXAN news in Austin that the agency “filed a short-term contract extension with CoreCivic for the T. Don Hutto Residential Facility located in Taylor, Texas, to remain open beyond Jan. 31, 2019.” Pruneda gave no end date for that extension.

According to Grassroots Leadership’s Bethany Carson, county commissioners didn’t know about the contract extension until they heard it from reporters. With a direct contract extension between ICE and CoreCivic, the county would have no oversight responsibilities to send in inspectors. “The county is totally out of it,” said Carson.

How ICE was able to shift from an ISGA with Williamson County to a private deal with CoreCivic is unclear. There is no record of any request for proposals or competitive bidding process, as is customary for federal contracts.

The city of Taylor appears reticent to intervene with its own oversight of the facility operating within its borders. “The city of Taylor is separate and apart from anything that CoreCivic and ICE have going on right now,” Mayor Brandt Rydell told KXAN. He added that he toured the facility in January and didn’t see any subpar conditions.

Grassroots Leadership has also uncovered through a public records request a security agreement for the Hutto facility between ICE and the Taylor Police Department, established as soon as the county cut ties in June 2018. The agreement commits the police department to providing emergency backup to on-site disturbances and assistance for apprehending any escapees. The public records request also unearthed a letter from Taylor chief of police Henry Fluck, thanking CoreCivic for their partnership at Hutto, and politely declining a gift card offered by a CoreCivic administrator.

This is not a situation where Taylor is a small town that’s wholly dependent on a detention center for its job base, Carson notes. “A lot of people from Austin are starting to move out, and there’s a thriving art scene,” she said. “The detention center threatens the potential for tourism and music, from our perspective. The city council is not viewing the detention center in that light.”

Grassroots Leadership remains in contact with detainees at Hutto, and believes abuses continue to take place there, though Taylor officials have denied this. “We hear things constantly,” Carson said. “All the systems in there set up to completely disregard [detainee] needs and make it difficult to get accountability when something bad happens.”
Grassroots Leadership has planned a “public demonstration of outrage”  prior to Thursday’s Taylor City Council, demanding answers on why the facility remains open. The city of Taylor has not yet responded to a request for comment.

The rally is part of a nationwide flurry of direct action since the revelations about family separation at the border became widespread. Activists aim to peel off private-sector and local government partners from ICE, by raising awareness of the human rights concerns with family separation and immigrant detention.

For Valentine’s Day, the “Corporate Backers of Hate” campaign sent a mariachi band to JPMorgan Chase CEO Jamie Dimon’s house, playing love songs to urge him to “break up” with private prisons. JPMorgan is a leading financier for private prison companies CoreCivic and Geo Group.

Deconstructing facilities and arrangements for immigrant detention built up over years is a slow and often maddening process. The Trump administration continues to warehouse immigrants, driving demand for more beds. Activists’ strategy for disrupting that policy decision by going after the facilities is sound, but only if their pressure leads to action. Whether Grassroots Leadership can make it work in Taylor is a harbinger of whether immigration policy can truly be upended at the local level.