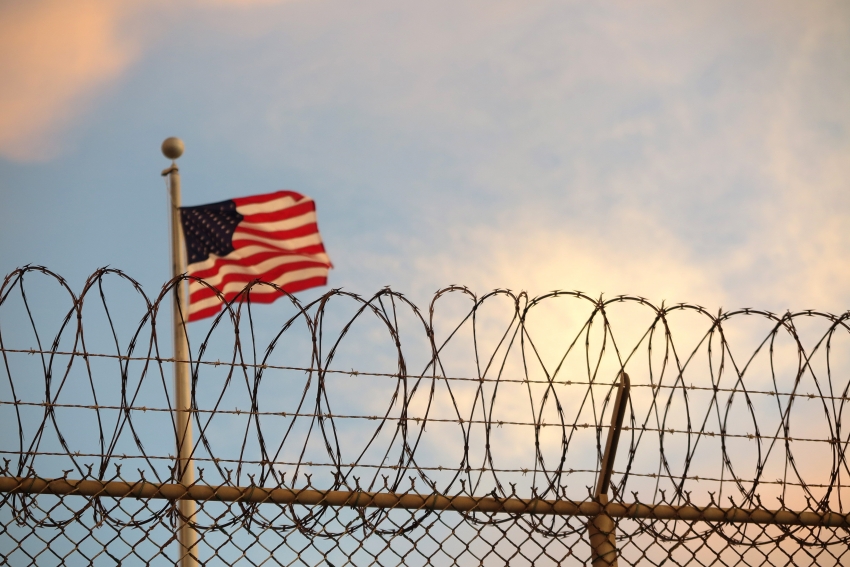 As Long as Guantanamo Exists, Trump Has a Torture Chamber Ready To Use

The administration has discussed warehousing refugee children at the notorious prison.

Despite nearly 18 years of near constant controversy — up to and including an order by the Obama administration to close it — the prison looks more likely to be expanded than closed.

There are few things that could give the Guantanamo Bay prison a more horrific reputation for violence than it already has.

From indefinitely detaining a Muslim population (many for years after being cleared for release) to charging Omar Khadr (a child detained and tortured at the age of 15) with war crimes, there are few surprises when it comes to the lengths to which the U.S. government will go to inflict violence on vulnerable communities.

Yet, according to one rumor, the Trump administration has just delivered a shock: Numerous reports coming out of the administration suggest that this notorious prison has been considered as a site to imprison migrant children.

For more cynical observers, this proposal for asylum seekers is no surprise at all. After all, it was roughly a year ago that the Trump administration adopted a policy of separating families, and has since detained thousands of children in remote desert facilities. In many cases those separations weren’t temporary but permanent, given the fact that the administration lost tabs on many of those children, or deported their parents.

The legality of the administration’s immigration detention policies has been fiercely debated. But Guantanamo has long been a site where the lawlessness maintained by the state remains, as the proverb says, out of sight, out of mind.

In fact, the prison has been used to house asylum seekers before. In 1994, Haitian children were held at the prison in “Camp Nine” — a site reserved exclusively for them. It was “catastrophic,” TIME reports. “Older children staged hunger strikes to protest their incarceration. ‘Houseparents’ who lived in the camps described the children as deeply traumatized, often screaming and sobbing as they lay awake at night. Reports of abuse proliferated.”

The government has dismissed similar complaints about its present camps, sugar-coating the conditions under which children have been held. They get pizza and ice cream and soccer fields, spokespeople say.

For all these supposed comforts,  numerous asylum-seeking children have died in U.S. custody with zero accountability, suggesting that the range of possible outcomes for migrant children includes detention at best, and death at worst. Being detained at Guantanamo, a military prison notorious for indefinite detention and torture, may collapse this bleak range even further — and even more insidiously, make it exponentially more difficult to track what happens to these children.

For now, the reports suggest that the administration has held off on transferring children there, reportedly over concerns about the optics of detaining children near “terror suspects.”

But the danger of Guantanamo isn’t just what happens to the people inside the prison — it’s how their imprisonment there appears to people outside the prison. Today, migrant children might be housed next to “terror suspects.” But, like so many Muslim prisoners who were summarily abducted and imprisoned without any evidence of connection to terrorism, it may be only a matter of time before others imprisoned there — even children seeking asylum — ­­become presumed “terror suspects” themselves. After all, prison bars don’t just prevent movement. They also lock away narratives that counter the U.S. government’s.

That may help explain the notorious prison’s extraordinary resilience. Despite nearly 18 years of near constant controversy — up to and including an order by the Obama administration to close it — the prison looks more likely to be expanded than closed.

Over his two years in office, Trump has signed an executive order to reverse Obama’s, advocated for the return of torture,  hampered a detainee art program after a successful traveling exhibit humanized the prisoners, and eliminated the Special Envoy for the closure of Guantanamo. And while former prisoners had few resources to help them restart their lives even before Trump, any lucky enough to be released now are all but guaranteed to be sent to third-party countries, with no support system to help rebuild their lives.

What Guantanamo’s continued operation demonstrates is that if its legacy of imprisonment without charge, indefinite detention, and torture is not confronted directly, this and future administrations will only dream up ever more sinister uses for it.