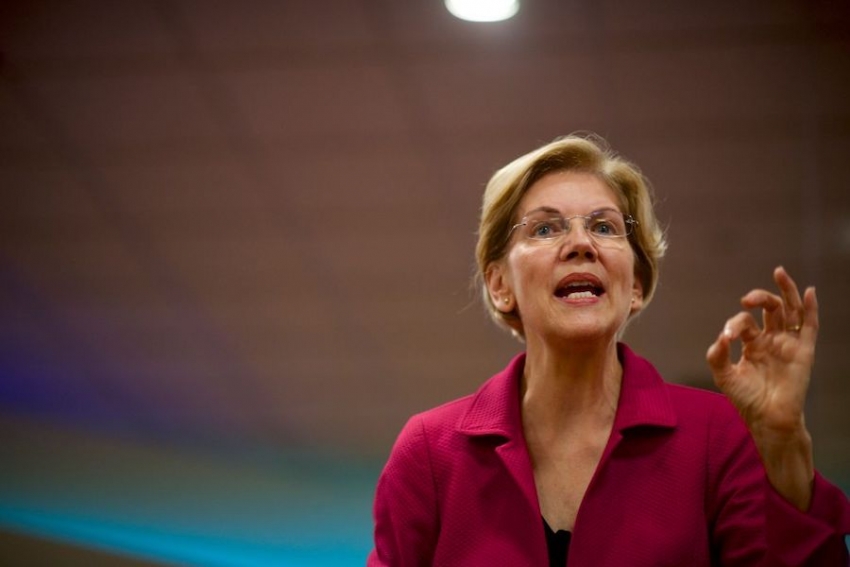 Democratic candidates Elizabeth Warren, Kamala Harris and Kirsten Gillibrand are all running on platforms to the left of Hillary Clinton. (Mark Makela/Getty Images)

Yes, A Woman Can Beat Trump

Democrats have learned all the wrong lessons from the 2016 election.

Warren, the female candidate doing best in the polls, has run a robustly populist campaign steeped in policy and aimed at structural economic change.

Are women electable? A flurry of recent reports suggests that, for many Democratic women, the answer is no. One 20-year-old told ABC News that, though she wants a woman president, “America’s just not there yet.” Washington Post reporter Dave Weigel tweeted that numerous “middle-aged women” told him “2016 showed that voters won’t elect a female president.” Polls show that defeating Donald Trump is extremely important to Democratic voters, and that the candidates they believe are most likely to beat him are white men like Joe Biden, Bernie Sanders and Beto O’Rourke.

It’s clear that Democratic voters remain haunted by the specter of Hillary Clinton’s 2016 loss. Frustratingly, we seem to have learned all the wrong lessons.

For starters, when it comes to a complex event like an election, it’s simply not true that any single factor—even gender—predetermines the outcome. In 2016, if any number of factors had gone the other way—if the economy had been just a little better, if FBI Director James Comey hadn’t reopened the email investigation at the eleventh hour, if Clinton’s campaign had poured more resources into key Midwestern states—Clinton likely would have won.

Of course, gender played a role—Clinton was subjected to a tsunami of appalling sexism from the media, Trump, slimy operatives and an army of internet trolls—but it’s surprisingly hard to prove her loss was because of gender bias. Yes, post-election studies show sexist attitudes were associated with voting for Trump, and a 2015 Gallup poll revealed 8% of Americans wouldn’t vote for a woman president—but these were mostly Republicans who would never have voted for a Democrat anyway. One study suggests Clinton’s gender could have won her more votes than it lost.

As political scientists Danny Hayes and Jennifer Lawless point out (based on non-presidential elections), women candidates are not less likely to win primary and general elections than men; the issue is that not enough run in the first place. Men are more likely to consider themselves qualified and more likely to be recruited. Perhaps there is something different about presidential elections, but as any social scientist will tell you, you can’t make broad generalizations based on a sample size of one.

Clinton’s own focus groups showed the glass ceiling argument was “the least effective positive case” for her candidacy. Instead, what voters cared about was whether the candidate could “make their own lives better.” Clinton failed to make that case and instead focused on her qualifications and biography (remember “I’m With Her”?) and the awfulness of Trump.

To their credit, several of the 2020 female candidates appear to have taken this lesson to heart and are running on platforms well to the left of Clinton’s. Sens. Kamala Harris, Kirsten Gillibrand and Elizabeth Warren are all co-sponsoring bills in support of Medicare for All, a federal jobs guarantee and a $15 nationwide minimum wage—positions Clinton avoided. Even the most moderate woman running, Sen. Amy Klobuchar, supports a $15 minimum wage. Warren, the female candidate doing best in the polls, has run a robustly populist campaign steeped in policy and aimed at structural economic change.

Warren clearly understands the moral stakes involved in the electability argument. At one candidates’ forum, she asked: “Are we going to show up for people that we didn’t actually believe in, but because we were too afraid to do anything else?” If we are too afraid to vote for women, there’s a danger of a self-fulfilling prophecy, discouraging women from running and voters from supporting them.

If the Democrats run the kind of campaign that Clinton ran (and that Biden shows every sign of running), they are likely to produce the same dismal results we saw in 2016. An obsession with electability will likely fuel the same politics of reaction and inequality that made voters cling so desperately to “electable” candidates in the first place.

Kathleen Geier has written for The Nation, The Baffler and The New Republic. She lives in Chicago.