If Warren has a superpower, it is her anger—a righteous, coruscating fury that beautifully clarifies the moral stakes of a rigged economy.

For supporters of Elizabeth Warren, the last several months have been tough: frustrating and often painful. The pro-Warren momentum that had been gathering steam through the summer and early fall came to a halt, and her poll numbers fell as she was dogged by attacks on her Medicare for All plan and the controversy over whether Bernie Sanders had or had not told her, in a private meeting, that a woman couldn’t beat Trump. She managed to claw her way to a respectable third place finish in Iowa, but in New Hampshire she couldn’t even crack double digits and placed a distant fourth. New Hampshire voters preferred even the empty suit mediocrities Pete Buttigieg and Amy Klobuchar over Warren, and that hurt. Ominously, he media began treating her as an also-ran, frequently erasing her from campaign coverage. In an NBC News/​Wall Street Journal poll released earlier this week, she was statistically tied for second place, yet blatantly excluded from questions about head-to-head matches between the Democratic candidates and Trump.

Luckily, fate provided Warren with the perfect foil: the racist, misogynist, former Republican billionaire Michael Bloomberg, the living embodiment of the corruption and capitalist excesses that she has been railing against for her entire career.

What was maddening to so many of Warren’s supporters is that her core strengths as a candidate were not coming through. Her answers in debates were always intelligent and well-formulated, but her presence seemed subdued. Long stretches of time would go by without Warren being called on, but she didn’t proactively try to insert herself back into the conversation. Her campaign had adopted a not especially compelling ​“unity” message and she seemed reluctant to criticize or even draw sharp contrasts between herself and the other candidates. The persona that came across was that of a nice but ineffectual, overly idealistic professor lady. Increasingly, pundits and voters were expressing fears that Warren could not beat Trump.

Warren supporters began asking one another: where was the Warren we came to know and love from viral videos of Congressional hearings where she savaged dirtbag CEOs, chiseling bankers and slimy government officials, turning them into quivering bowls of jello?

If Warren has a superpower, it is her anger, a righteous, coruscating fury that beautifully clarifies the moral stakes of a rigged economy that enables the rich to suck up vast resources of money and power at the expense of everyone else. But of course, coming from a woman, a rage that powerful can frighten people, and it’s likely that the staff in charge of Warren’s debate prep advised her to keep it under wraps.

But a Warren without her rage is like a boxing champion with one hand tied behind her back. All women running for office face a delicate balance of trying to defuse sexism by appearing pleasant and unthreatening on the one hand, while also having to present themselves as tough and powerful enough to lead on the other. Up to this point in her campaign, Warren mostly refrained from attacking other candidates. But it’s interesting to note that the one time the abortive campaign of Kamala Harris showed any life was her masterful takedown of Joe Biden in an early debate. Similarly, Amy Klobuchar got a significant boost from her attacks on Peter Buttigieg in the New Hampshire debate, which buoyed her to a surprise third place finish in that state.

It was clear that the neutered version of Warren wasn’t working for her. She is not running for Miss Effing Congeniality, she is running for President of the United States — and specifically, as the warrior queen who will take down the monstrous Donald Trump. She needed to prove to voters that she can do that. She needed to bring the steel and the fire, and she needed to aggressively insert herself into the conversation instead of politely waiting for the moderators to call on her.

Last night was a high-stakes moment for Warren, an event that had the potential to become the turning point of her campaign. Her back was against the wall and especially in light of the virtual media blackout of Warren of late, she badly needed a breakout moment. The Nevada debate might prove to be her last chance to create one. Luckily, fate provided her with the perfect foil: the racist, misogynist, former Republican billionaire Michael Bloomberg, the living embodiment of the corruption and capitalist excesses that Warren has been railing against for her entire career. It marked the first debate appearance for Bloomberg, a late entry into the race.

Bloomberg, who in so many ways is eerily similar to Trump (the racism! the sexism! the bullying and arrogance! the refusal, so far, to release his tax returns!), was effectively a stand-in for Trump in the debate. And if the debate was an audition for the role of the candidate who has what takes to bring down Trump, Warren was the hands-down winner. She owned that stage like a boss. I can’t remember any other debate where one candidate dominated as much as Warren did. Her confrontations with Bloomberg were brutal, fearless and unsparing.

On Bloomberg’s stop and frisk policy: ​“No, this isn’t about how it turned out. This is about what it was designed to do to begin with. … You need a different apology here, Mr. Mayor.”

On the numerous allegations of sexual harassment that have been made against Bloomberg personally and the company he’s in charge of: ​“So, Mr. Mayor, are you willing to release all of those women from those nondisclosure agreements, so we can hear their side of the story? … We are not going to beat Donald Trump with a man who has who knows how many nondisclosure agreements and the drip, drip, drip of stories of women saying they have been harassed and discriminated against.”

Bloomberg … did not respond well. When Warren spoke, his eyes were full of cold fury and his lips were pursed as if he were sucking on a lemon. When Warren talked about the sexual harassment lawsuits against his company, he literally rolled his eyes. 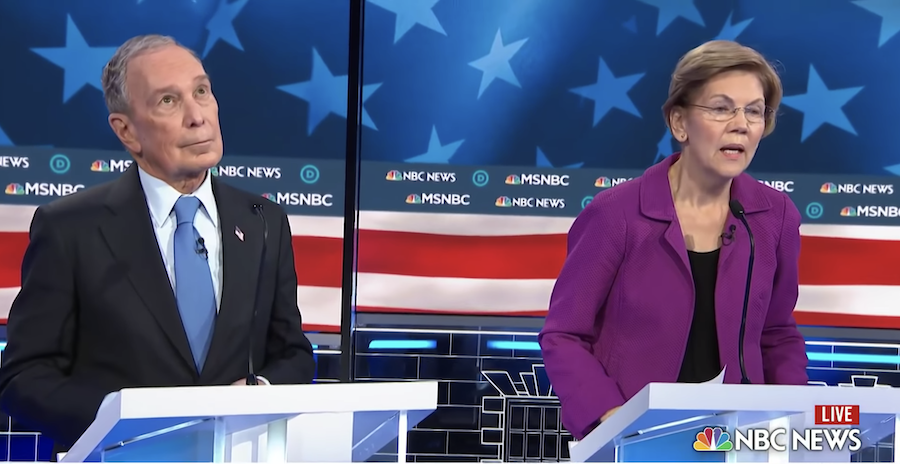 Two things Warren accomplished in the debate are especially notable. First, she insistently included a racial analysis even in questions that didn’t ask directly about race, such as the discussion about globalization. She also performed a brilliant jujitsu by bringing up the electability question, which has often been used against her, to turn it on Bloomberg instead: ​“Democrats are not going to win if we have a nominee who has a history of hiding his tax returns, of harassing women and of supporting racist polls like redlining and stop and frisk.”

Will Warren’s debate performance help her regain momentum and her foothold as a top contender in the race? That is not clear. It might not have much of an impact on the outcome in Saturday’s Nevada caucus, since thousands of people have already participated in early voting.

And for a female candidate, a performance as fierce as Warren’s was has the potential to backfire. Like clockwork, centrist media scolds took her to task for being ​“mean and angry.” But while it’s likely that such a combative performance would have been poorly received if she were leading in the polls, it plays differently now that she’s an underdog candidate. Even Warren critics like MSNBC’s Chris Matthews declared her the winner of the debate. Matthews said that ​“Democrats have to find someone who can coalesce the left and center left. Elizabeth Warren can do that.” The debate earned her an outpouring of social media love, and anecdotally a number of voters on my Twitter feed who had previously said they’d been undecided declared that they would be voting for Warren. Perhaps most significantly of all, Warren’s campaign announced that yesterday was their ​“best debate day of the entire campaign, raising more than $2.8 million.”

But in the end, Warren had no choice but to come out swinging. If she’d given another subdued performance she would have run the risk of being completely disappeared by the media. And also? It was clearly the right thing to do. Elizabeth Warren is a fighter, and fighters fight. At best, it will help her turn the tide of the race and create the kind of momentum that will result in victory. At worst, she performed a major public service by taking down a despicable billionaire with horrendous politics who is trying to subvert democracy by buying his way into the White House. What’s not to like?

The views expressed in this piece are the author’s own. As a 501©3 nonprofit, In These Times does not oppose or endorse candidates for political office.

Read the author’s vision of a Warren presidency here.

Kathleen Geier has written for The Nation, The Baffler and The New Republic. She lives in Chicago.
Have thoughts or reactions to this or any other piece that you'd like to share? Send us a note with the Letter to the Editor form.
More articles by Kathleen Geier
Feature
What an Elizabeth Warren Presidency Would Look Like
Warren is a “visionary implementer.”
Viewpoint
Yes, A Woman Can Beat Trump
Democrats have learned all the wrong lessons from the 2016 election.
Viewpoint
Elizabeth Warren’s Universal Child Care Plan Is a Good Start. Other 2020 Candidates Can Up the Ante.
Warren's plan represents a big step forward, but we should demand something far bolder to address the child care crisis in America.
Similar articles
Viewpoint
Where Is the 100,000-Strong Public Health Corps Biden Promised Us?
The government needs to bring vaccines and information to the people through an ambitious public jobs program, just like Biden said he would.
Abdullah Shihipar
ViewpointRural America
GDP: A Countdown to Doom
The numbers we use to measure the economy’s recovery from Covid also measure the rate at which we barrel into ecological catastrophe.
Joseph Bullington
Viewpoint
The GOP's Assault on Democracy Demands a Third Reconstruction
Voter suppression threatens the American experiment as we know it. History tells us that hope rests on our ability to mobilize the masses.
Rev. Liz Theoharis
Join our newsletter
Fearless journalism, emailed straight to you.
Subscribe and Save 66%