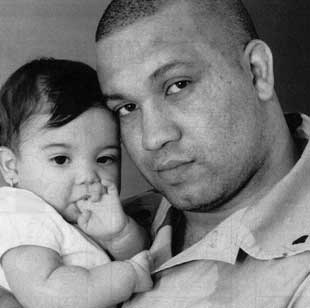 Gerard Matthew thought he was lucky. He returned from his Iraq tour a year and a half ago alive and in one piece. But after the New York State National Guardsman got home, he learned that a bunkmate, Sgt. Ray Ramos, and a group of N.Y. Guard members from another unit had accepted an offer by the New York Daily News and reporter Juan Gonzalez to be tested for depleted uranium (DU) contamination, and had tested positive.

Matthew, 31, decided that since he’d spent much of his time in Iraq lugging around DU-damaged equipment, he’d better get tested too. It turned out he was the most contaminated of them all.

Matthew immediately urged his wife to get an ultrasound check of their unborn baby. They discovered the fetus had a condition common to those with radioactive exposure: atypical syndactyly. The right hand had only two digits.

So far Victoria Claudette, now 13 months old, shows no other genetic disorders and is healthy, but Matthew feels guilty for causing her deformity and angry at a government that never warned him about DU’s dangers.

U.S. forces first used DU in the 1991 Gulf War, when some 300 tons of depleted uranium–the waste product of nuclear power plants and weapons facilities–were used in tank shells and shells fired by A-10 jets. A lesser amount was deployed by U.S. and NATO forces during the Balkans conflict. But in the current wars in Afghanistan and, especially, Iraq, DU has become the weapon of choice, with more than 1,000 tons used in Afghanistan and more than 3,000 tons used in Iraq. And while DU was fired mostly in the desert during the Gulf War, in the current war in Iraq, most of DU munitions are exploding in populated urban areas.

The Pentagon has expanded DU beyond tank and A-10 shells, for use in bunker-busting bombs, which can spew out more than half a ton of DU in one explosion, in anti-personnel bomblets, and even in M-16 and pistol shells. The military loves DU for its unique penetration capability–it cuts through steel or concrete like they’re butter.

The problem is that when DU hits its target, it burns at a high temperature, throwing off clouds of microscopic particles that poison a wide area and remain radioactive for billions of years. If inhaled, these particles can lodge in lungs, other organs or bones, irradiating tissue and causing cancers.

Worse yet, uranium is also a highly toxic heavy metal. Indeed, while there is some debate over the risk posed by the element’s radioactive emissions, there is no debate regarding its chemical toxicity. According to Mt. Sinai pathologist Thomas Fasey, who participated in the New York Guard unit testing, the element has an affinity for bonding with DNA, where even trace amounts can cause cancers and fetal abnormalities.

Dr. Doug Rokke, a health physicist at the University of Illinois who headed up a Pentagon study of depleted uranium weapons in the mid ’90s after concerns were raised during the Gulf War, concluded there was no safe way to use the weapons. Rokke says the Pentagon responded by denouncing him, after earlier commending his work.

No one knows how many U.S. soldiers have been contaminated by DU residue. Despite regulations authorizing tests for any military personnel who suspects exposure, the U.S. military is avoiding doing those tests–or delaying them until they are meaningless.

“When we asked to be tested at Ft. Dix, they wrongly told us we didn’t have to worry unless we had DU fragments in our body,” says Matthew. His buddy, Sgt. Ramos, who exhibits symptoms resembling radiation sickness and heavy metal poisoning, adds that at Walter Reed Medical Center he was grilled for hours about why he wanted to be tested and was then branded a troublemaker by his own unit. Matthew says Walter Reed “lost” his sample.

At the war’s start, the United States refused to allow U.N. or other environmental inspectors to test DU levels within Iraq. Now the United Nations won’t even go near Iraq because of security concerns.

“It doesn’t seem right that we are poisoning the places we are supposed to be liberating,” Ramos says.

The Pentagon continues to insist, on the basis of no field evidence, that DU is safe. To date, only some 270 returned troops have been tested for DU contamination by the military and Veterans Affairs. But even those tests, mostly urine samples, are useless 30 days after exposure, because by that time most of the DU has left the body or migrated into bones or organs.

Gonzalez and the Daily News paid for costlier tests for nine Guardsmen–tests that could pinpoint uranium inside the body and identify the special isotope signature of man-made DU. Four of the nine tested positive for DU; all had symptoms of uranium poisoning.

“This was not a Democratic or a Republican issue,” Dillon says. “These are our kids and someone needs to protect them.” She says that since passage of her bill, which takes effect this October, military groups and family organizations, state legislators, and even National Guard unit commanders have contacted her for copies of her bill to promote in their states. Bob Smith, a veteran in Louisiana who got hold of Dillon’s bill and spearheaded a successful effort to pass similar legislation in Louisiana, claims that 14 to 20 other states are considering similar measures.

If enough Guard troops avail themselves of the testing–and start testing positive for contamination–it seems likely that reservists and active duty troops and veterans will demand similar access to rigorous tests, which can cost upwards of $1000 per person.

One way or another, the Pentagon will pay a price. “DU is a war crime. It’s that simple,” Rokke says. “Once you’ve scattered all this stuff around, and then refuse to clean it up, you’ve committed a war crime.”