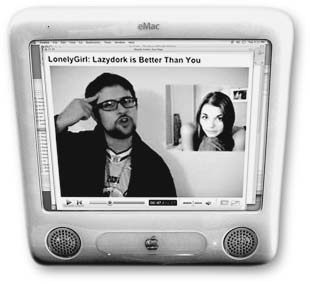 Americans are hams. Life, liberty and the pursuit of happiness? The country’s motto should be “look at me, look at me!” It’s too easy to dismiss such behavior as exhibitionism or acting out. Today large swaths of the populace feel nonexistent without an audience. This tendency to seek attention has accelerated with the recent explosion of social networking and video sharing Web sites. Ostensibly, these sites help us to connect with friends, families and the like-minded, but their names belie this. On MySpace and YouTube, making friends is secondary to generating a virtual fanbase, an online altar to yourself.

Why has this compulsion to see and be seen overtaken so many of us? Anthropologist Thomas de Zengotita explores this question in his 2005 book Mediated: How the Media Shapes Your World and the Way You Live in It. Although he finished the book months before YouTube launched in February 2005, his analysis couldn’t be more on point.

For those of you not keyed into YouTube, the site–which allows visitors to upload, categorize and rate video clips–is single-handedly changing media-viewing habits. Its audience is growing rapidly: between January and June of 2006 the number of unique visitors to the site increased by 297 percent, according to Nielsen/NetRatings. Users are watching more than 70 million videos on the site daily, and the largest percentage of those visitors is between the ages of 12 and 17. By posting a TV pilot rejected by the WB–the ironically named Nobody’s Watching, a fake reality show–fans generated enough interest to convince NBC to pick it up, and the site was instrumental in feeding this summer’s muthaf***ing Snakes on a Plane mania.

YouTube’s hodgepodge of clips includes a little of everything that can be squished into in less than 10 minutes: snippets of commercial broadcasts, ads, music videos, bloopers, film trailers and even entire films segmented into short chunks. But content created and uploaded by amateur videographers on their own time and their own dime that rules the roost.

Why all the would-be Woody Allens? De Zengotita blames this need to be center stage on the flattering nature of our media-saturated environment. All around us, billboards, televisions, computer screens and well-meaning experts address us as audience members and consumers. 24/7 media outlets serve up endless lifestyles, experiences and vantage points, bolstered by a “free to be you and me” celebration of diversity. Courted and pandered to at every turn, the audience becomes solipsistic and fickle. “The flattered self is spoiled,” De Zengotita writes, “It never gets enough. It feels unappreciated. It whines a lot. It wants attention.”

He calls this state of being the center of everyone’s solicitations “MeWorld,” noting that one of its most pernicious effects is an inescapable self-consciousness–a sense of always being “on.” Such “method acting,” as he dubs it, doesn’t only undermine the feeling of having a real self, but throws into question the reality of others. This dynamic played out this summer on YouTube, through the saga of lonelygirl15.

For those living offline: lonelygirl15 is Bree, a 16-year-old homeschooled vlogger who hangs out in her bedroom with her friend Daniel and a puppet named Purple Monkey in a town that’s “like really boring.” Her nearly 30 posts, which began in mid-June, were fetching or irritating depending on your tastes, but they drew hundreds of thousands of viewers and even sustained attention from that arbiter of mainstream reality, The New York Times.

As Bree drew an audience, she also began to attract skeptics, some of whom posted their doubts about her veracity as video responses on YouTube, while others doggedly tracked each clue on blogs and discussion boards. Wasn’t the lighting a bit too professional, her goofy face-making just a tad too cute, the story arc too neat? Was this a promotion for a film, an elaborate joke, a real-time role-playing game? Speculations, parodies and news stories proliferated, with one fan plunking down the 15 bucks to register the domain name www.islonelygirl15real.com, giving it the tagline “Tracking the results of the world’s quest to find the truth!” By Sept. 7, the quest was over. A letter “To Our Incredible Fans” appeared on the discussion board at www.lonelygirl15.com from “The Creators,” who wrote:

We hope that you will join us in the continuing story of Lonelygirl15, and help us usher in an era of interactive storytelling where the line between “fan” and “star” has been removed, and dedicated fans like yourselves are paid for their efforts. This is an incredible time for the creator inside all of us.

“Bree,” it turns out, was a 19-year-old film student, the star of a project hatched by three aspiring filmmakers in their late-20s. Cue media-wide hand-wringing and widespread fan disgust.

On the one hand, this is yet another trivial story of new media micro-celebrity. On the other, it poses these questions: Why were viewers so drawn to Bree and her saccharine performances of precocious teenage girlhood? Why were they so quick to tear at her façade? So obsessed with finding answers? And why does this minor incident mirror so many of today’s fan-star dynamics, in which viewers raise up celebrities only to revel in details of their divorces, breakups and drug habits?

It comes back to MeWorld. We want badly to identify with those we hope to emulate, while simultaneously rejecting them for their obvious artifice. Dissatisfaction with the star system then drives viewers to seek their own spotlight. Attention is the currency that powers the new economy; why should it all accrue to those freaks and strivers currently celebrated as stars? To the barricades–better yet, to the camcorders!

Politicians–long known for being stage-managed, photo-opped and poll-tested–are particularly challenged in MeWorld. The rise of the progressive blogosphere demonstrates both a longing for authenticity and the ascendance of the audience to center-stage. But politicians are still trapped by the conventions of their trade.

“They face the threat of diminishment by comparison with virtual personalities, on the one hand, and, on the other, incessant pressure from journalists angling for a gotcha moment because that’s the only interesting thing they can do,” de Zengotita writes. “So politicians package themselves for protection–and end up looking phony as well as flawed.”

By allowing videos of gaffes to be isolated, posted and repeated, YouTube has intensified and hastened the cycle of building up and tearing down. This summer, Sens. Conrad Burns (R-Mont.), George “Macaca” Allen (R-Va.) and Joe Biden (D-De.) all found themselves at the mercy of the newest of the new media for making statements that critics characterized as racist. In these cases, bad publicity really was bad publicity.

Ryan Lizza of The New Republic dissected the new political moment in an August 20 New York Times article. “If campaigns resemble reality television, where any moment of a candidate’s life can be captured on film and posted on the Web, will the last shreds of authenticity be stripped from our public officials?” he asked. “Will candidates be pushed further into a scripted bubble? In short, will YouTube democratize politics, or destroy it?”

Over on the Personal Democracy Forum, a Web site devoted to exploring “the tools powering the new civic conversation,” contributing editor Ari Melber put in a plug for the benefits of bottom-up media. “It’s not surprising that political aides are wary of user-driven technology,” he writes, “since it might force new information and scrutiny on conventional campaigns. Campaigns aim to deliver a message through several mediums, and campaign managers prefer top-down mediums that they can control or influence.”

Politicians are no longer able to tailor their messages to finite audiences: state fair attendees, senior citizens, the party faithful. Each appearance now holds the possibility of being captured and rebroadcast to the larger public. This means that politicians and their handlers need to develop new forms of communicating with a cynical and empowered audience.

How soon will it be before we see a lonelygirl15 political candidate–so appealingly genuine that she’s fake, so fake, she might just be real? Barack Obama comes to mind. Or perhaps the moment has already arrived: In late August, Democratic presidential candidate Mark Warner gave an address in the online virtual world Second Life in the guise of a pixellated videogame avatar–the next stage of inauthentic authenticity. It is available, of course, on YouTube.

This article forms part of a larger research project on online video and public life for The Center for Social Media at American University.