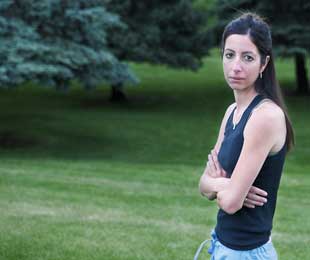 Shelly Guillory, 25, a psychiatric nurse, was force-fed through a tube for the last five years.

The Skinny on Thin

Thin, a movie filmed at the Renfrew Center, follows four women in their battle with eating disorders.

At first, it’s hard to know who to identify with in Thin, filmed over six months at the Renfrew Center, a residential facility devoted to treating eating disorders in southern Florida.

Sallow and bony, the patients cry over cupcakes and denounce each new ounce of flesh as an affront to their rituals of control. Shivering in their backless hospital gowns, they resemble catwalk caricatures. Documentarian Lauren Greenfield captures staff slagging the women behind closed doors–calling one a “bad seed”–and forcing them into corny group sessions in which they must speak while holding an “integrity stick.”

But as the film wears on, a more complex picture emerges. The narrative hones in on the treatment paths of four patients: Shelly, 25, so afraid of food that she’s been outfitted with a stomach tube; Brittany, 15, who learned her calorie-restricting ways from her anorexic mom; Alisa, 30, a mother of two given to compulsive binging and purging; and Polly, 29, a southern firecracker who attempted suicide after eating two slices of pizza. Renfrew’s rules and routines come into focus as practical tools for forcing patients to abandon habits of lying and manipulating to mask their obsessions.

Jane Fleming, the film’s lead consultant, can identify with both sides. One of the first patients at the Florida center, she also served as the executive director of Renfrew Center Foundation. Now the executive director of Young Democrats for America, she helped to develop a program at Renfrew that stresses activism as a tool for recovery. For Thin, she served as an advocate for the patients and advised the film crew about how to work with often-reluctant staff.

“Mostly it was honest,” Fleming says of the film. “An honest glimpse into how difficult it is to recover, the pain it causes families and loved ones and–maybe the most important–the internal struggle that goes on every minute of the recovery process.”

That process can be circuitous and frustrating, with many false starts. Anorexia is the most deadly mental disorder; up to 20 percent of sufferers die from related complications. Some even court it: “I just want to be thin,” says Alisa “If it takes dying to get there, so be it.”

And while longterm residential treatment is the recommend therapy, only 60 percent of patients recover partially or fully. “There is no magic bullet,” says Fleming, adding that on average it takes 8 years for women to fully recover. Indeed, each of the women profiled in Thin relapsed after the film.

Recovery is made more difficult by an insurance system that discriminates against those suffering from eating disorders, refusing to pay for treatment beyond a pre-set limit. In Thin, Brittany and Polly both suffer dramatic crises after they are told their coverage is abruptly running out. The solution, says Fleming, is passing the Paul Wellstone Mental Health Parity Act, which would force insurers to cover patients on par with those suffering physical illness. When in power, Speaker of the House Dennis Hastert, had not allowed it to come up to the floor for a vote, “a direct slap in the face for millions of people who struggle not only with eating disorders but depression and other mental illnesses,” Fleming says. The bill now has enough votes to pass.

Thin–along with its companion book, exhibit and Web site–makes a powerful argument for parity, but is unable to show the full scope of the treatment. Fleming, however, is a testament to Renfrew’s methods. Currently at work on a cookbook for those in recovery, she calls her healing process “one of the most difficult and proudest accomplishments of my life.”