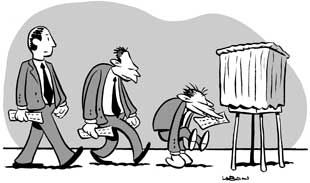 Believing that “people are rational as consumers and irrational as voters,” many conservatives would favor free markets without democracy

Given the choice between democracy without free markets or free markets without democracy, many conservatives would cheerfully opt for the latter.

Behavioral economists at UC San Diego recently conducted a study in which tokens were distributed among experimental subjects, with a few getting a concentrated chunk of the wealth and a majority getting little. They offered the “poor” subjects the opportunity to pay a price to take money away from the rich. The catch was that rather than being redistributed, the money would simply disappear. Economic orthodoxy predicts that few would snap at the chance, since they'd be paying for something that would confer no direct benefit. But they did. In spades.

Though only one data point, it suggests that people have a profound sense of economic fairness, that we are all, more or less, intuitive socialists. As far back as Edmund Burke, conservatives have suspected as much and feared democracy for that very reason. Read James Madison in the Federalist Papers and it's clear that many of the Constitution's undemocratic elements were designed to prevent the expropriation of wealth from an outnumbered elite.

This central tension between laissez faire capitalism and the redistributive whims of a democratic electorate isn't discussed much. But it can poke through the surface during moments of clarity, such as the last election, when minimum wage increases passed in every state–red and blue–where they were on the ballot.

For Bryan Caplan, an economist at George Mason University and author of The Myth of the Rational Voter: Why Democracies Choose Bad Policies, the minimum wage is an iconic example of the economically backwards policies favored by the foolish masses. “In theory,” he writes, “democracy is a bulwark against socially harmful policies, but in practice it gives them safe harbor.” Examining this “paradox” takes up the rest of the book, but his explanation is pretty simple: Voters are crazy.

The Myth of the Rational Voter is best understood in the context of a long-standing academic debate over whether democracy works. It's a question that has two related, but distinct, sub-components: Do democracies produce optimal policies for its citizens? And do democracies produce policies that accurately reflect the will of the majority?

The most sanguine observers say “yes” on both counts. But given that surveys consistently show that voters are distressingly ignorant about both the rudiments of policy (whether we spend more on foreign aid or social security) and politics (how many senators each state has), it's a difficult case to make. Another strain of thought is the so-called Public Choice school, which answers “no” to both questions. Public Choice theorists tend, like Caplan, to be free market enthusiasts and argue that democracies inevitably lead to bloated bureaucracies, trade protectionism and inefficient subsidies. These sub-optimal economic policies occur not because of their widespread popularity, but rather because the state's agenda is so easily manipulated by special interests looking to make easy money by regulating their competitors or getting their hands on taxpayer dollars.

Caplan disagrees: Democracy fails to produce good policies precisely because it reflects the will of the majority. Or, as H.L. Mencken once put it: “Democracy is the theory that the people know what they want and deserve to get it good and hard.”

What the people want, according to Caplan, is economic bollocks. To establish this point, he devotes a chapter to the Survey of Americans and Economists on the Economy (SAEE). Conducted in 1996, the survey asked economists and members of the general public questions about the economy, and found a divergence of opinion on almost every principle of policy: whether taxes, immigration and foreign aid are major or minor contributors to the nation's economic health, whether “business profits are too high,” and whether “downsizing” is hurting the economy.

Caplan attributes this divergence to four basic biases of the unwashed masses–anti-market bias (a skepticism that the price mechanism works), anti-foreign bias, make-work bias (a desire to create jobs even if it's inefficient) and pessimistic bias, the tendency to believe the economy's getting worse instead of better. Imagine the worldview of Lou Dobbs, and that's roughly the belief system Caplan thinks is typical. Because these biases make people feel good about themselves, people hold to them even in the face of countervailing evidence. Or, more precisely, they hold to them irrationally.

But this argument puts Caplan in a precarious position. The consensus economic model that he subscribes to–and that forms the worldview of the economists that he cites as definitive–is grounded on the assumption that people are rational. Pull out that Jenga block and the edifice of Caplan's economic worldview tumbles down with it: If people aren't rational, there's no reason to assume that they'll respond predictably to incentives or market signals.

So Caplan requires extra dexterity to withdraw the “rational voter” from the architecture of his theoretical framework. He must somehow maintain that the same person can be rational as a consumer, worker or business owner, but irrational as a citizen and a voter. In other words, voters must be somehow possessed of what Caplan calls “rational irrationality.”

The idea is this: People are rational when they pay for the consequences of their decisions. But in elections, the odds of your vote determining a given election are so slim that the price of voting your irrational whims is nil. This gives people the freedom to indulge delusional notions about the economy. And that results in a populace who are capitalists in the market place and socialists in the voting booth. Needless to say, Caplan thinks we're at our best in the former case and quotes legendary economist Joseph Schumpeter to describe the latter: “[T]he typical citizen drops down to a lower level of mental performance as soon as he enters the political field. He argues and analyzes in a way which he would readily recognize as infantile within the sphere of his real interests. He becomes a primitive again.”

“If people are rational as consumers and irrational as voters,” Caplan writes, “it is a good idea to rely more on markets and less on politics.”

The first and most obvious problem with Caplan's argument is that it quickly leads to some very dark places. He notes, enthusiastically, that education makes people think more like economists and that, luckily, the highly educated vote at higher rates than the less educated. But why leave it to chance? You could instead give more votes to businessmen and university graduates, as Caplan comes close to proposing, or simply require people to “pass a test of economic literacy to vote.”

Which brings us to the second problem: what constitutes economic consensus. Caplan spends considerable time attempting to persuade the reader that if experts and the general public disagree, the experts are right and the public wrong. That may often be the case, but it's not a static proposition: What experts believe evolves over time, and the same is true of the public. In 1996, the public thought taxes were too high, but recent polling suggests that's no longer the case. The kinds of social democratic market interventions that Caplan holds in such low regard were prominent features of the post-war economies of the United States, Canada and Western Europe, which were some of the most productive and equitable in human history. Not only were the policies relatively effective, they were also largely popular with both the public and economists. Caplan's book wouldn't have made much sense 40 years ago, which prompts the question: Will it make much sense in the future? Caplan thinks he's describing the fundamentals about human nature, but he might just be elaborating on the contingencies of an era.

What's more, sometimes the public is right and the experts are wrong. Economic experts used to believe in price controls. Foreign policy experts thought we should go to war with Iraq. The record of expertise in matters of public policy is an uneven one, to say the least.

Finally, Caplan over-interprets the degree of economic consensus. He stresses that, appearances to the contrary, economists agree on a broad range of principles, and the data from SAEE bear this out. But governments don't legislate principles; they legislate policies, and when it comes to policies the disagreement is tremendous. Caplan thinks the minimum wage borders on quackery, but last year more than 500 economists, including a half-dozen Nobel laureates, signed a petition in favor of raising it.

It's tempting to dismiss Caplan's thesis out of hand, because it's so self-consciously “provocative” and because he's translating an old discredited anti-democratic argument into the jargon of econocentric elite-speak. But if you support democracy, you must confront the fact that voters can often be stunningly under-informed and that majoritarianism run amok can lead to persecution, hatred and injustice. Reading Caplan's book, then, is both bracing and necessary because it forces the reader to stare into the abyss–an abyss the author seems only too happy to jump into.

Caplan's willingness to embrace the darkness, however, is what makes this book so important: It articulates in lurid detail the obscene id of Chicago-school, Grover-Norquist-style, free market fundamentalism (a term Caplan spends a chapter rebutting). Given a choice between democracy without free markets or free markets without democracy, many conservatives would gladly choose the latter. Hence Milton Friedman advising Augusto Pinochet in Chile and the Bush administration's support of a coup in Venezuela.

And the book's manifest elitism is not fringe. It is blurbed by economist Alan Blinder, who advised President Clinton, and N. Gregory Mankiw, who headed the Council of Economic Advisors under George W. Bush. Over the last 30 years, conservatives have made political hay by railing against liberal “elitists” who want to substitute the judgment of faceless bureaucrats, activist judges and pointy-headed intellectuals for that of the common man. Yet if you got some prominent conservatives off the record–after plying them with a few drinks–I bet more than a few would agree with Caplan: Voters are fools.

Good thing our campaign donors are the ones who really run things.