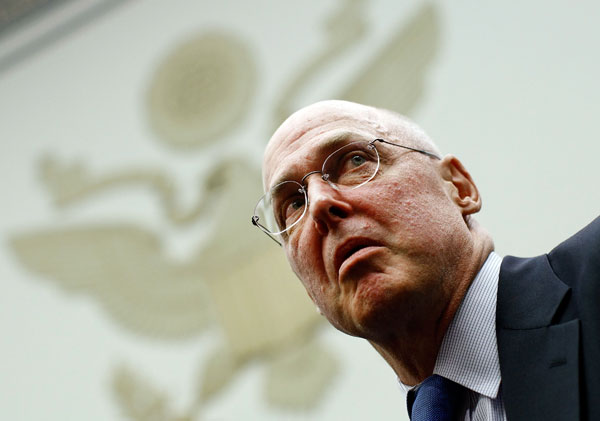 One year after the Wall Street bailout, real reform of the financial sector is still a dream.

The diversion of federal resources to bailing out the financial sector has created a far more polarized society.

It’s as if last year’s meltdown–causing a $16 trillion bailout of the financial industry, the doubling of America’s unemployment rate and the loss of 2 million manufacturing jobs in 2008–had never taken place. Two of the five biggest investment banks, Bear Stearns and Lehman Brothers, have bitten the dust, but the survivors intend to party on, federal dollars in hand.

The Obama administration’s passive attitude creates despair for observers like Wall Street veteran Nomi Prins, a former managing director of Bear Stearns and Goldman Sachs and author of It Takes a Pillage: Behind the Bailouts, Bonuses, and Backroom Deals from Washington to Wall Street (John Wiley & Sons, September). Whereas “the New Deal meshed government rescue with economic restructuring,” Prins sees few signs that the Obama team is going to insist that the big bailout be coupled with serious re-regulation of the financial sector.

“I think we are less stable now,” Prins told In These Times. “There are fewer banks and they are more concentrated and more influential than before. We might not have a crisis on subprime loans in five years, but it might turn out to be the financial sector not fully paying back their loans that causes a new crisis.”

Thus far, Obama seems unwilling to engage in an all-out fight with Wall Street or even fundamentally break from the trickle-down approach followed by former Treasury Secretary Hank Paulson (the former Goldman Sachs chairman and CEO). Paulson argued that major investment banks were “too big to fail” and then unleashed a gusher of federal assistance to Wall Street, starting with $787 billion in TARP funds.

A very different, bottom-up approach would have been far less expensive. “A total of about $1.7 trillion would have handled the subprime crisis,” says Prins. With that investment, the government could have bought or subsidized every single house on the verge of foreclosure. That would have been a very cheap fix for subprime loans.

But such an approach was apparently unthinkable to Paulson. On July 8, 2008, Paulson took a free-market stance toward moderate-income families facing foreclosure, many of whom had been victimized by deceptive practices associated with subprime loans. Acknowledging that these families “will lose their homes,” Paulson nonetheless said, “There is little public policymakers can or should do to compensate for untenable financial decisions.”

However, in the fall of 2008, just two months after his speech about holding homeowners responsible for their “untenable financial decisions,” Paulson came up with a relief strategy for these “too big to fail” banks and insurers.

Proposed reforms by the Obama administration have been disappointing, says Prins. “They’re using the same approach [as the Bush Administration] of giving money to the banks and assuming that they’ll lend it to the people. There’s never been an independent drill-down to discover banks’ real assets and liabilities like the 1930’s. The ‘stress tests’ were valued by traders who sold them in the first place, so it becomes kind of circular and meaningless.”

Even some progressive Democrats like House Financial Services Committee Chair Barney Frank (D-Mass.) have expressed worries that too-stringent legislation could curtail “financial innovation.” “That was the argument behind repealing the Glass-Steagall Act,” says Prins. Glass-Steagall was a crucial New Deal banking regulation enacted to prevent a replay of the speculation-induced 1929 crash. It was repealed by the Gramm-Leach-Bliley Act of 1999 on a 92-8 vote.

The Treasury Department’s call for more transparency so all financial transactions–including derivatives and credit default obligations–are recorded is a good step, but enforcement procedures are vague. “The industry should be dissected and cut into parts that can be regulated,” instead of being permanently positioned for government handouts in the name of being “too big to fail.” The federal government needs to “take away the ability for the financial system to leverage and trade itself beyond its capacity to absorb the risk,” says Prins.

Particularly vital, she says, is re-instituting the Glass-Steagall Act, which separated banks into operations making conventional loans (mortgages, car loans, commercial lending, etc.) and those allowed to engage in speculation. “There can be a role for speculation–that is, any investment with risk–but not a role for government subsidizing that speculation.”

One particularly useful idea to emerge from the Obama Administration is establishing a Consumer Financial Protection Agency. “Having a real enforcement agency would make a difference; but certainly it would encounter pushback from Wall Street,” she says. “Even if the agency comes to fruition, it will be hard to do its stated job.”

Overall, the diversion of federal resources to bailing out the financial sector has created a far more polarized society, with spreading conditions of poverty and deprivation across America, Prins argues.

“We’re creating cuts at the police station, the fire station, the public parks, the libraries,” she says. “We’re seeing much more of a Dickensian society, and these effects will be long-lasting.”

Despite her exhaustive research in documenting the size of the ever-ballooning government bailout of the financial sector, Prins is still stunned by how quickly the federal government jumped to bail out bankers. “It’s amazing how much money the government can come up with… without asking any questions or putting any new rules in place,” she sighs.