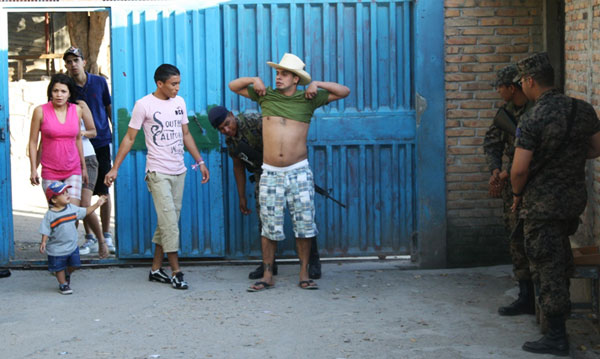 Soldiers strip-search a voter at a polling place in the Honduran capital of Tegucigalpa, on Sunday, November 29. Turnout for the election was the lowest in the nation's history. (Photo by Jeremy Kryt)

Election day was marked by violence against peaceful protesters. Police and soldiers used tear gas and truncheons to break up a peaceful protest march of about 500 people in the country's largest city.

TEGUCIGALPA, HONDURAS–The military-backed de facto government in Honduras named Porfirio “Pepe” Lobo to be the new head of State on Sunday, November 29, after a controversial election that many local and international human rights experts had denounced as both fraudulent and illegal.

The result of the election, in which the government says 49 percent of Honduran voters participated, remains unrecognized by most nations of the world. The United States has recognized it.

Adding to the political turmoil, the U.S.-brokered peace plan designed to heal the social crisis collapsed a few days after the vote, when the Honduran Congress voted on Wednesday against allowing deposed president Mel Zelaya to finish out his term.

But Lobo, the newly-minted president-elect, seems confident he can bring peace to a fractured nation.

“This will be a government of unity and reconciliation,” Lobo said during his victory speech Sunday night, speaking at hotel in the capital of Tegucgalpa. Lobo, who represents the far-right Nationalist party, is a wealthy rancher, with strong ties to the lucrative Honduran timber industry. “These elections have shown the world that democracy exists in Honduras,” Lobo said.

But much of the human rights community remains unconvinced.

“There’s no way you can have free and fair elections when there’s this kind of oppression going on,” said Karen Spring, who was in Honduras to monitor elections for Rights Action, a Connecticut-based nonprofit. “Democracy is a process. But in Honduras there’s been martial law for months… And all that time people were being shot and killed and beaten.”

The crowd at Lobo’s victory reception Sunday night was small but frenzied. His supporters sang along with a quasi-religious fervor to Lobo’s campaign theme songs, while they waited for the far-right political veteran to appear. Large screens mounted above the crowd showed a steady montage of puppies, men on horseback, and various blue-collar laborers happily going about their work.

Despite his assurances that it was time for “a new Honduras,” Lobo made little mention of specific policy goals or human development initiatives in his speech, preferring instead to focus on patriotic rhetoric.

“We are a free, independent and sovereign country; we won’t accept impositions or divisive political compromises,” he said. Lobo also promised to call a “national dialogue” to address the social and economic problems plaguing the nation. “Nobody will be left out,” he promised.

Honduras was thrown into chaos last June 28, when legally-elected president Mel Zelaya was ousted in a military-backed coup, exiled and replaced by de facto president Roberto Micheletti, a member of Zelaya’s own party. Micheletti has agreed to hand over power to Lobo on January 28, a move many say would complete the coup-legitimization process.

Zelaya – who, ironically, is also a wealthy rancher from the same part of the country as Lobo, and who defeated Lobo in the presidential race in 2005 – had angered political and business elites by attempting to reform a rigidly stratified Honduran society.

In mid-September, he slipped into Honduras, taking refuge in the Brazilian Embassy, where he’s been trapped ever since, surrounded by hundreds of Honduran soldiers and police. In a letter released from the embassy, he asked Hondurans not to recognize the election.

Before the elections, the U.S. had been one of the few nations to hint that it might recognize the outcome. But Congress’ failure to reinstate Zelaya calls all that into question.

In an official statement, the U.S. State Department referred to the decision “disappointing.” But members of Honduran Congress seemed firm in their decision. The Congress, which also voted in favor of Zelaya’s ouster in June, voted 111 to 14 in favor of keeping him out of office for the remainder of his term, which ends on January 28.

“Zelaya and his minority of thinkers like to spread lies,” said Nationalist Congressman Carlos Kattan, speaking Wednesday evening at the National Congress Building. “He had no right to put this country in a dangerous situation, and damage its credibility. [T]hey are conspirators against our nation,” Kattan said.

The powerful, pacifist, anti-coup resistance movement, however, contends that the Honduran Congress itself is riddled with corruption.

“They voted against Zelaya because they are representatives of the interests of the oligarchy,” said resistance leader Juan Barahona, in a cell phone interview. “They are the ones who wanted the coup… They see Zelaya as a threat to their interests. A challenge to their economic power, because he sought to make small changes in the system.”

Barahona, who is also a top advisor to president Zelaya, said the resistance would continue whether the president was restored or not. “We will not roll over and surrender,” said Barahona, who’s massive Front Against the Coup continues to mobilize peaceful rallies and marches across the country, despite the ongoing oppression. “We will continue in peace, and we will continue as long as necessary,” Barahona said.

“We are in a desperate human rights state of emergency,” said Bertha Oliva, director of the Committee for Disappeared Persons in Honduras (COFADEH). Oliva cited a broad range of confirmed abuses on and about election day, including illegal detentions, beatings, and even “torture and murder.”

In the five months since the putsch, COFADEH has confirmed that authorities have frequently used live rounds against nonviolent demonstrators, and at least 27 members of the resistance have been killed since the coup, including, most recently, a retired teacher and well-known resistance organizer.

According to COFADEH documents, Gradis Espinal, 56, was forced into a marked police patrol car on November 25, in broad daylight in front of several witnesses. The outspoken educator’s body was found the next day, just a few miles to the northeast, in a barrio called Las Casitas on the outskirts of the capital.

Others have been caught in the crossfire with even more devastating results. A 33 year-old dairy worker named Angel Salgado was shot in the head by soldiers after accidentally driving too close to a checkpoint in the capital on November 26. Two other innocent civilians were also struck by 5.56 mm M16 rounds when soldiers opened fire. Salgado lingered for several days on life support, before dying on Wednesday, about the same time Congress was voting against Zelaya.

“They didn’t tell my brother to get out of the car, and they didn’t give him or the other passengers any kind of warning,” said Albert Salgado, the wounded man’s brother. “The soldiers just started shooting at point blank range.” According to the official police report, the round entered just behind Salgado’s left ear, and exited near the top-left side of his skull.

Salgado was married with a four-year-old son.

“The government that has taken over the country is ultimately responsible,” Albert Salgado said of his brother’s death. “Because [the de facto government] has given so much power to the police and the army.”