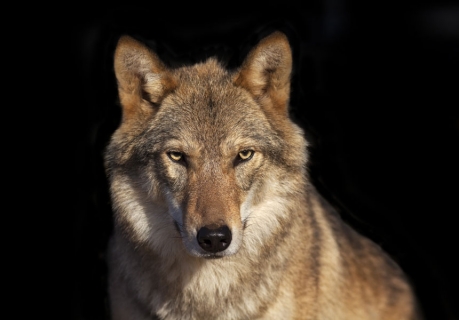 Wolves have an uncanny knack of staring directly into the camera.   Olga_GI/Shutterstock

In 2012, the United States Fish and Wildlife Service (USFWS) removed the gray wolf from its list of endangered and threatened species. With the protections granted under the Endangered Species Act lifted, managing the wolf’s recovery became a matter for the states. That’s not to say that states with wolf populations weren’t engaged in management prior to 2012, they certainly were, but state DNRs lacked the authority to implement kill-policies without federal oversight. The Secretary of the Interior first announced that the gray wolf was out of danger in 2009, but legal battles on multiple fronts challenged and delayed that ruling. The controversy surrounding the decision was much like every aspect of wolf policy implemented before and after: difficult to overstate.

Last November, when I started working on Do We Need Wolves? I was planning to write a story about the different ways Great Lakes states (Minnesota, Wisconsin and Michican) with gray wolf breeding populations went about wolf management—counting packs, addressing livestock confrontations, and regulating the recently reinstated hunting and trapping seasons.

I knew very little about wolves except that I’d been living in rural Wisconsin for almost 4 years and had never seen one. What quickly became apparent was that, whether I’d seen one or not, the wolf wasn’t just a four-legged carnivore making a comeback in the lower 48—it was a code word for an emotional and political human debate. With no shortage of passion on all sides, the wolf seemed to target the raw nerve exposed whenever science and sentiment collide—a nerve the other 1,361 endangered plants and animals in the United States had apparently failed to agitate anywhere near as successfully. To figure out why, I started asking the question: Why is the wolf so controversial?

Regardless of who I talked to—wildlife biologist, rancher, trapper, wolf advocate—their answer started with a failed attempt to stifle some form of laughter, followed by a variation of the question: "How much time do you have?"

The more I learned about wolves, the more I realized the last few hundreds years had been an existential wild ride for the entire canid species. My working title became "The Gray Wolf Rollercoaster." (I thought it fit well and might make for some interesting cover art.) In three centuries, wolves in (what’s now) the contiguous 48 had gone from a thriving species at the top of the food chain—covering more of the continent than any other mammal—to a few hundred survivors holding out in Minnesota's deep Northwoods (and on a remote island in Lake Superior) to a Lazarus-like environmental success story to, most recently, the target of multiple statewide recreational hunting seasons.

For a while the first sentence of my story was something like:

It was a start. A couple of weeks before Christmas I thought my story was looking pretty good—I had interviewed DNR biologists and large-carnivore specialists in three states, had some compelling quotes from wildlife advocates and had joined two online trapping forums to better understand the perspective of wolf hunters.

On Dec. 19, 2014, as I was getting ready to hit send on a draft of "The Gray Wolf Rollercoaster" to In These Times, a U.S. District Court Judge issued a ruling that flipped the focus of my story—the different approaches states were taking towards wolf management—upside down. Judge Beryl A. Howell had ruled that the USFWS 2012 decision to delist wolves was “arbitrary and capricious.” Effective immediately, wolf management authority was taken away from the Great Lakes states and placed back into the federal government’s hands. I knew right away that this was good for the wolf but bad for getting my article finished before Christmas.

A lot has happened since—the gray wolf rollercoaster has a few more loops—but the story is up. I hope it serves as an introduction to how the United States is dealing with the return of an iconic predator. In many ways, I regret that a story about a wild animal relies so heavily on terms like "Congress", "ruling", "state", "federal" and "legislation" but in the words of the late In These Times Senior Editor Kurt Vonnegut, “So it goes."

Check out my story “Do We Need Wolves?” and post your thoughts in the comments section. I’ll respond to the best of my ability.

The wolves of North America

The gray wolf, Canis lupus, includes a diverse (and disputed) number of subspecies found throughout Canada and the states of Minnesota, Wisconsin, Michigan, Wyoming, Montana, Idaho and, in the past few years, Washington and Oregon.

The timber wolf is a common name for the gray wolves found in the Rockies and the Great Lakes region, while the eastern wolf (found in southeastern Ontario) may be a gray wolf subspecies or its own species entirely. Further complicating taxonomic designations, eastern wolves and coyotes can mate to produce an urban-savvy wolf hybrid known as the coy wolf. Gray wolves eat, rather than breed with, coyotes—the species being genetically incompatible.

Since a December 2014 court ruling reinstated federal control over the gray wolf, most gray wolves in the Midwest are once again on the “endangered” list (gray wolves in Minnesota are the exception, currently listed as “threatened”). Two other wolf species are also considered “endangered”: the Mexican gray wolf, Canis lupus baileyi, which lives in Arizona and New Mexico, and the red wolf, Canis rufus, which historically roamed much of the southeast and now lives exclusively in North Carolina.

Wolves are an apex predator, an animal at the top of its food chain with no other animals actively engaged in trying to eat it. They also have a highly socialized pack structure, living and hunting in packs that average between five and 12 in number. Their main food is ungulates—caribou, elk, deer—many times their own size. An adult wolf requires about 5 pounds of meat a day, but lives a feast or famine lifestyle—capable of going days without food and then consuming as much as 20 pounds in one feeding.

Packs have a single alpha female or male at the top. That alpha and its mate are solely responsible for breeding and leading the pack. Wolves communicate using an intricate combination of vocalizations, body language and scent markings. As pups mature, they leave the pack (alone or in pairs) in search of other packs or mates with which to form packs of their own. In the spring, local wolf populations can nearly double as pups are born, but even when not killed by man only 40 to 60 percent of pups survive to maturity.