When you combine an economic system that requires constant growth in order to function, with a legal system that mistakes corporations for ​“people” — you inevitably wind up with a few extremely powerful corporations and a lot of powerless people. Furthermore, when that same system regards nature as property, thus allowing those in control to do whatever they see fit with a given area’s natural resources, long-term ecological health takes a backseat to short-term profits. For decades, communities across the country have been learning this lesson the hard way.

In recent years in New Hampshire, energy development projects and the application of sewage sludge on farmland have sparked resident concerns over contamination of local water supplies. In addition, according to the EPA’s latest Toxics Release Inventory Program ​data, the small state is home to 127 of the 21,600 toxic sites monitored by the agency. Maintaining that a weakening of citizen’s rights at home has left their communities defenseless against ever-worsening corporate abuses, a group of Granite Staters are challenging the legal ​system that in effect grants corporations a license to pollute by denying local governments the right to control what occurs within their jurisdictions.

When citizens determine that the actions of a corporation pose an economic, environmental or public health threat to their community — whether it’s a new pipeline, a factory farm, a facility generating industrial waste, a mining operation etc. — and they try to stop that entity from setting up shop in their town, they’re often surprised to learn that (despite what the Declaration of Independence says about ​“life, liberty, and the pursuit of happiness”) they are powerless to do anything about it.

This is by design. Over time, one state legislature after another has passed preemption laws — legal doctrines restricting a city, town, or county’s legal authority to regulate its economy or protect its environment — that prioritize corporate interests over those of local communities. In other words, corporations usually get what they want because the law, as it is written, is on their side, not yours.

Instead of fighting each and every corporate assault — on people or on nature — on a case-by-case basis, the community rights movement, a grassroots network of people who’ve had it up to here with corporate power, is working on the local, state and federal levels to address the problem at its source. The National Community Rights Network (NCRN) and its affiliates in states across the country are attempting to end government-sanctioned corporate exploitation by amending state and federal constitutions in order to ​“codify a community’s inalienable right to self-governance.”

This is not easy. In many cases, before a proposed constitutional amendment can even get on a state’s ballot, supporters must first convince state legislators to allow it. On Tuesday, February 6, members of the New Hampshire Community Rights Network (NHCRN) met with the state’s House Municipal and County Government Committee in Concord in an attempt to do just that.

NHCRN organizers and about 50 of their supporters, including Thomas Linzey, the executive director of the Community Environmental Legal Defense Fund (and a Rural America In These Times contributing writer), gathered to urge the committee to consider Constitutional Amendment Concurrent Resolution 19 (CACR19). This is NHCRN’s second attempt to give New Hampshire voters a chance to decide for themselves whether or not to add a community rights amendment to their state’s constitution — an amendment that would allow local municipalities to enact laws to protect their people and environment from corporate harm.

The full text of the bill can be found here, but reads in part:

Be it Resolved by the House of Representatives, the Senate concurring, that the Constitution of New Hampshire be amended as follows:

I. That the first part of the constitution be amended by inserting after article 39 the following new article:

[Art.] 40. [Right of Local Community Self-Government.] All government of right originates from the people, is founded in their consent, and instituted for the general good; the people have the right and the duty to reform governments when those governments manifestly endanger public liberty; and sustainable environmental and economic development can be achieved only when the people affected by governing decisions are the ones who make them; therefore, the people of New Hampshire have an inherent and inalienable right of local, community self-government in each county, municipality, city, and town to enact local laws that protect health, safety, and welfare by recognizing or establishing rights of natural persons, their local communities, and nature; and by securing those rights using prohibitions and other means deemed necessary by the community, including measures to establish, define, alter, or eliminate competing rights, powers, privileges, immunities, or duties of corporations and other business entities operating, or seeking to operate, in the community. Local laws adopted pursuant to this article shall not weaken existing protections for, or constrict the fundamental rights of, natural persons, or their local communities, or nature, as those protections and rights are secured by local, state, federal, or international law.

While about a dozen New Hampshire towns already have ordinances geared toward ensuring the health, safety and welfare of their residents, municipalities cannot technically enact any laws the state doesn’t allow them to. This is because, like all but 11 states in the country, New Hampshire follows the so-called Dillon’s Rule—a doctrine that since 1868 has been a ​“cornerstone of municipal law” and holds that local governments can only enact laws that are approved by their state Legislature. 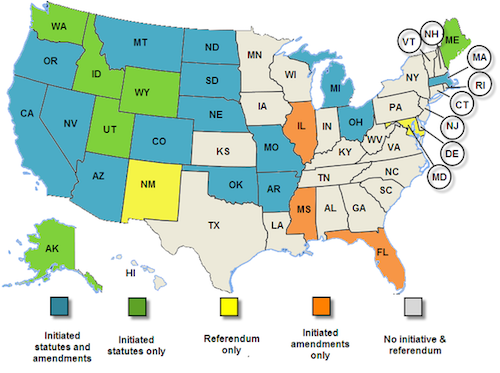 Twenty-six states, as well as Washington, D.C., offer initiative and/​or veto referendum rights for their citizens — the ability to petetion a new statute or constitutional amendment through the collection of a minimum number of registered voter signatures — New Hampshire is not one of them. (Infographic: bal​lot​pe​dia​.org)
Urging Granite State residents to get behind their amendment, NHCRN organizers wrote the following in a letter-to-the-editor of Seacoastonline, an online news agency based in Portsmouth:

Such recognition has been a long time coming to strengthen and restore ​“We the People’s” right to self-determine the future of the communities we live in. This right has been all but suffocated by corrupt corporate privilege that has been woven into law and upheld by judicial precedents. Together with state preemption, this weakening of citizen rights at home has left us with no defense when corporate projects come to develop or to extract resources in our towns — much less when these projects contaminate where we work and live, often with toxic waste. We’ve seen this happen all across our state. We should be able to have a recognized right to local decision-making authority to determine whether or not we want these projects in our communities.

By empowering people with authority to use this self-determining voice, CACR19 would reinforce the viability of our civil rights by supporting our democratic right to cultivate communities founded in peace and civility in which no person or entity has free pass to violate the health, safety, or well-being of another person or of nature, and certainly not for profit. Each day that our government denies us full participation in determining this cultivation, we are discriminated against — blocked from accessing and engaging in our rightful democratic process to protect our basic and inalienable rights that are not limited to but which include our right to clean air, water, and healthy ecosystems.

These inalienable rights were the ideals that birthed this nation’s experiment in democracy. And what is democracy if it is not the civic employment of people’s inalienable right to have democratic authority over what happens in their communities? When we cannot protect ourselves through the self-government so integral to the principles of our Revolutionary ancestors, then we are not living in a democracy. We must not let this right to self-government go un-championed by a disengaged sense of civic duty, nor can we afford to lose it amidst the animosity found in our divided political aisles. Now is the time to unite both community and bi-partisanship solidarity and action to recognize our right to self-government.

What the Revolutionaries of this country fought for was not something they could buy. It was the right to pursue a self-determined life of honesty and goodness. For our legislators to deny us an enlightened path to access this self-determination is for them to admit doubt in their constituents’ ability to reason over and to trust in the goodness that is in ourselves and in the ecosystems around us. CACR19 will secure our right to protect this goodness for a new future honoring people’s and nature’s natural right to sustainability.

Before the bill can go anywhere, the House Municipal and County Government Committee must vote OTP (“Ought to Pass”), at which point the amendment could continue to the House and Senate. If approved, only then would it be placed on the ballot for voters to decide. CELDF’s Thomas Linzey tells Rural America In These Times the public turnout on February 6 was good despite the fact the flu was ​“running rampant up there.” ​“We have nine co-sponsors who are committed, so we’re in a better place than last year at least,” he says. The next subcommittee hearing is scheduled for February 13.

Below is an interview in which Tom Groover, vice-president of the National Community Rights Network’s (NCRN) board of directors, speaks with CELDF organizers Michelle Sanborn, Monica Christofili and NHCRN member, Douglas Darrell, about their effort and why they feel it is more important than ever that they succeed in putting the measure before New Hampshire voters.

For more information about the NHCRN or the proposed constitutional amendment, contact info@​nhcommunityrights.​org or visit www​.nhcom​mu​ni​tyrights​.org.

John Collins is the editor of Rural America In These Times. He lives between Minneapolis and La Pointe, Wisconsin, a village on Madeline Island in Lake Superior.
Have thoughts or reactions to this or any other piece that you'd like to share? Send us a note with the Letter to the Editor form.
More articles by John Collins
Rural America
Democrats Have Gone off the Rails in Rural America. Can a New Report Get Them Back on Track?
Rural America
How Much Nitrate Is in Rural America’s Water?
Rural America
Native Youth “Paddle to Protect” Minnesota’s Water from Another Enbridge Pipeline
Similar articles
Rural America
Queering the Family Farm: Meet the LGBTQ Midwest Farmers Taking Food Justice Into Their Own Hands
“We’re not just raising food. We are creating safe spaces for people.”
Bennet Goldstein
ViewpointRural America
A Brief History of How Big Oil Outplayed Us All
For a century, the fossil fuel industry has outmaneuvered regulators and the public to lock in its power and profits, at the world’s expense.
Naomi Oreskes and Jeff Nesbit
Rural America
Why 40 Years on the Superfund List Hasn’t Saved Tar Creek
Residents of northeastern Oklahoma continue to be poisoned by toxic mine runoff from one of the nation’s first Superfund sites.
Tara Lohan
Join our newsletter
Fearless journalism, emailed straight to you.
Subscribe and Save 59%