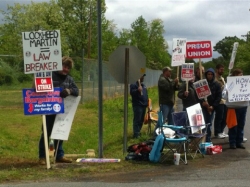 'Everyone is sick and tired' of company's demands, says IAM

Strikes involving thousands of workers in the "right-to-work" state of Texas are extraordinarily rare. Yet on Monday, 3,600 Lockheed Martin workers, members of IAM Local 776 who make F-35 and F-16 fighter jets in Fort Worth, Texas, went out on strike to protest proposed healthcare and pension cuts.

Workers are upset about a proposed contract that would make workers’ pay much higher insurance deductibles. Lockheed Martin has already implemented this plan for its nonunion employees.

Workers are also upset about a plan that would eliminate defined-benefit pensions for new hires. In recent years, many other unions have agreed to this concession while retaining defined-benefit plans for current union members—a group of 15,000 GE workers agreed to a similar change for future hires last summer. Lockheed workers in Texas, however are fed up.

“The first time..., they take away pension for new hires. Next time around, when new hires [are in the union], they say 'we are going to freeze the pension.' Of course, the new hires that don't have a pension aren't going to strike, so then the pension is frozen,” says IAM spokesman Bob Woods. “Companies like Lockheed Martin simply want to eliminate defined benefit pensions plans.”

We believe our offer included terms that constituted a fair and equitable contract for the IAM members, including wage increases of 3 percent annually in each of the three years, a $3,000 signing bonus, an annual cost of living supplement of $800, increased retirement income for current employees, and various other improvements. We're disappointed that the IAM members rejected the company's last, best and final offer and voted to strike. Our operations will remain open and we will implement our contingency plan while focusing on meeting our commitments to our customers.

The union feels confident, though, that Lockheed Martin—the largest federal defense contractor, with $17.34 billion in federal projects last year—would be unable to operate the Texas plant without the skill of its unionized workforce.

“They could try to bring in scabs, but this is the most advanced aircraft in the world," Wood says. "The skills of these workers out here are second to none. All they are doing right now is having a few management guys go around and fiddle with things."

Workers at the Fort Worth facility went on strikes in both 2000 and 2003 to resist concessions. Wood says that the union is prepared to stay out on strike for weeks, even months, in order to get Lockheed to drop its concession demands.

“Every three years they want to come and take some other benefit. Everyone is sick and tired of it. These folks are prepared to be on strike for a long time” says Wood.