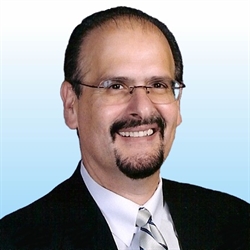 Carlos Azcoitia, the Board of Education's newest member, is insisting on a case-by-case review of 54 schools slated for closure. (Chicago Board of Ed)

Since at least 1995, the mayor-appointed Chicago Board of Education has signed off on every proposal placed before it by the mayor's office, often with no discussion or dissent. A new board member, however, is calling for a more deliberative process during a controversial upcoming decision on 54 school closings.
On May 22, the board is scheduled to decide on the closings of 53 elementary schools and one high school program deemed "underutilized," as well as the firings of staff at six more schools. Last year, the board approved 17 school actions in one fell vote. But this time, Carlos Azcoitia, who was appointed to the board in November, tells Working In These Times that he wants the board to go “school by school."

Azcoitia says he does not oppose the idea of the closings but believes that the six-member body needs to "spend the time reviewing the recommendations for each school based on community meetings, hearings, data and information from administration and local communities."

An in-depth review could yield objections: Just yesterday, hearing officers appointed by Chicago Public Schools to review the plan announced their opposition to ten of the closings.

“This is a major, major undertaking,” says Azcoitia, adding that in some cases, past CPS closings “have not worked out.”
Given Azcoitia's apparent potential to be a squeaky wheel, why did Emanuel appoint him?
According to Azcoitia, an education professor at National Louis University, he was approached about the open position by a former colleague (whom he would not identify) after former board member Rodrigo Sierra jumped to the Chicago Housing Authority board. The appointment was greeted with no press attention, save a CBS piece noting that Azcoitia is a former CPS principal and started his career as a 7th and 8th grade teacher.
His background, however, is unusual for the board. None of the other five members have elementary or high-school teaching experience, and only one other member, Mahalia Hines, is a former principal. Board President David Vitale and Vice President Jesse Ruiz come from the world of corporate finance.
“Unlike some of the business men on this board, he has actually been involved in public education,” says Jesse Sharkey, vice president of the Chicago Teachers Union. Sharkey adds that while CTU would really like to see teachers and parents on the board, a former public school principal is a good step forward.
“It’s probably not a coincidence that he is one of the people who has critical things to say [on the proposed closings],” Sharkey says.
Maybe Emanuel saw Azcoitia as an administration loyalist thanks to his 1996-2003 stint as Deputy Chief of Education for CPS head Paul Vallas, who initiated policies such as more standardized tests that were vehemently opposed by the teachers union.
But Wanda Hopkins, president of the Chicago group Parents United for Responsible Education, says that dating back to the creation of Local School Councils in 1988, Azcoitia has been sympathetic to the input of both teachers and community members. “I was so glad that they put him in, but I didn’t really understand why,” Hopkins says. “I truly don’t believe Rahm Emanuel knew that Azcoitia was going to do what he has been doing.”
The question remains, however: Can Azcoitia propel the board to become something other than a rubber stamp for CPS policies?
At the April 24 board meeting, Azcoitia voted against three proposals to effectively expand the district’s charter school seats. The items passed anyway, though Hines, the other former principal on the board, joined Azcoitia on voting “no” for renewing an agreement with Chicago Virtual Charter School. Azcoitia argued at the meeting that the district should not add more charter seats amid the process of closing neighborhood schools.
When the issue of closings came up, Hines expressed concern about how specific closings will impact the safety of CPS students traveling to new schools. One worry is that Chicago gangs have become increasingly factionalized, and Hines wondered if CPS has really dealt with the matter of students crossing gang boundaries. “I think we ought to look at this really, really carefully and they are going to have to come back with better options than that,” Hines said at the meeting.
Board member Andrea Zopp, president of the Chicago Urban League, acted as a third voice of dissent at the meeting, though a less vociferous one than Hines and Azcoitia. She pressed for CPS to provide clearer information about the safety of new school routes and how each transition will impact special education students.
With one of the board’s seven seats vacant —following the resignation of hotel heiress Penny Pritzker, whom Obama has nominated for U.S. Secretary of Commerce—Azcoitia, Hines and Zopp represent half of the board. Barbara Radner, an education professor at DePaul University, believes that the three members concerns could lead to some schools being removed from the closing list.
Others are not so sure.
Rod Estvan, an education policy specialist at the disability rights group Access Living, says that board members rarely communicate with each other, either in session or outside of meetings. He predicts that absent a dialogue about what specific closings to oppose, Vitale may let Azcotia, Hines and Zopp “vote their conscience” on opposing a few individual shutdowns, but that without coordinated voting, all the slated school actions will nonetheless pass.
Sharkey also points out that dissent is easier coming from the minority, comparing Azcoitia to dovish U.S. Rep. Jan Schakowsky, an Evanston Democrat, who reliably votes to the left of the Republican-controlled House on defense issues. “Jan Schakowsky is free to vote ‘no’ on any war spending bill,” Sharkey says. “The question is whether she will vote ‘no’ when she has the deciding vote.”
Sharkey says that the union will adopt a wait-and-see approach and judge at the May 22 meeting whether the board’s dynamic has changed. But he acknowledges that, following what transpired at the April board meeting, CTU is “holding internal discussions” about whether to expend more time directly engaging board members.