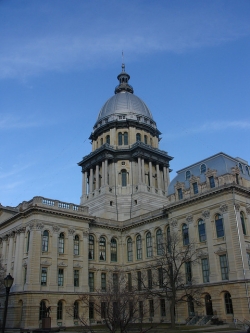 Lawmakers in Springfield failed to agree on a fix for the state's pension system before the legislative session ended May 31.   (Mark and Allegra / Flickr / Creative Commons).

The Illinois General Assembly ended its spring legislative session on Friday without passing either of two competing bills to overhaul the state public employee pension system—the most poorly funded state worker retirement system in the country, with $96 billion, or more than half, of future pension obligations unfunded.

Political momentum behind the passage of a bill appeared strong. House Republican leader Tom Cross said pension financing is the most pressing issue the state has faced in 50 years. Gov. Pat Quinn, a Democrat, said he was “put on earth” to solve Illinois’ pension liability. And public-sector labor unions, which have historically opposed any pension reform, got on board in May. But despite all this, Illinois Speaker of the House Mike Madigan and Illinois Senate President John Cullerton, both Democrats, were unable to agree on a bill.

In the past, Illinois labor’s kneejerk reaction to any pension bill has been to oppose it as “unfair and unconstitutional.” “Unfair” because almost every pension bill proposes benefit cuts for public employees, even after these workers loyally paid into the system. “Unconstitutional” because the 1970 Illinois Constitution statesthat no law may “diminish or impair” contractually guaranteed benefits.

Things changed this May. First, by a vote of 62-51, the Illinois House passed a pension bill sponsored by Speaker Mike Madigan, a Chicago Democrat and the Democratic House Leader since 1983. The bill angered unions by raising the retirement age and contributions for workers while cutting their benefits.

Madigan’s proposal to unilaterally cut the pensions of current workers and retirees has become the conventional political wisdom in Illinois, but it is fairly extraordinary nationally.

Only a few states, such as Rhode Island, have undertaken such cuts, and teachers in Rhode Island, unlike Illinois, are partly covered by Social Security retirement benefits. The majority of states that have recently enacted pension laws, including Illinois itself in 2010, have focused on measures that only impact newly hired public employees.

But with the political chorus in Illinois demanding pension reform, unions decided to work with Senate President John Cullerton, another Chicago Democrat, on a competing Senate bill. Cullerton’s proposal would give employees an unpleasant “choice” of either losing their state-financed retiree health care or losing some of their retirement benefits. The measure acknowledged that Illinois has one of the strongest constitutional provisions in the country protecting contractual pension benefits.

Cullerton figured with this choice that the bill was constitutional enough, as did the We Are One Illinois coalition—a group of state unions representing hundreds of thousands of state government workers, teachers and university employees—which supported the bill. “SB 2404 offers a fiscally responsible and fair solution to the state’s pension underfunding problem,” said coalition executive director Justin Nigro in an e-mail to Working in These Times.

The Senate apparently agreed, passing the bill 40-16 on May 9.

“The unions are being rational, political actors,” says Ralph Martire, executive director of the Chicago-based Center for Tax and Budget Accountability. “They are trying to limit harm.”

There is little that is rational, however, about Illinois politics. House Speaker Madigan simply never called SB 2404 for a floor vote before the House adjourned. Senate President Cullerton, meanwhile, called Madigan’s bill, but the Senate voted it down.

No attempts were made publicly to reconcile the two bills. Quinn stated his preference for the Madigan measure, but the governor’s clout in pension negotiations is unclear. Kent Redfield, a longtime political science professor at the University of Illinois-Springfield argues that Quinn, who has approval ratings in the 20s, “has been and continues to be almost completely irrelevant.”

In Illinois, any legislation considered after May 31 must have three-fifths support from the Illinois General Assembly. Cullerton spokeswoman Rikeesha Phelon says that SB2404 is “the only bill that could pass the three-fifths threshold.”

But Madigan, widely considered the most powerful figure in state government, shows no inclination toward calling the Cullerton bill to a vote. Madigan spokesperson Steve Brown argues that the Senate bill, “offers dramatically less savings than the bill that the House members voted on.”

Moreover, the Illinois Retired Teachers Association, which represents 35,000 retirees, has announced that it will sue if SB 2404 becomes law. It contends that the choice between diminishing benefits and giving up retiree healthcare is akin to coercion. It also argues that a court challenge is necessary “to move forward,” in the words of association executive director Jim Bachmann, in order to find out what changes to the pension system the Illinois Supreme Court will deem constitutional.

Beyond these two options—push SB 2404 and sue if another bill passes; or sue if any bill passes—there are many others labor could consider. These include increasing the anemic tax base by moving from a flat to progressive income tax. Another, less significant, revenue generator would be to levy an income tax on pension benefits. Out of 44 states with an income tax, Illinois is one of three that does not tax retirement benefits.

But even now—with a governor and senate leader who support a graduated income tax plus a Democratic super majority—these options are not on the table. The political situation could grow worse for labor in 2014, as Illinois Republicans campaign on a 'do-nothing' Democratic governor and legislative supermajority that could not close the deal on pensions. (The campaigns may also include Madigan’s daughter Lisa Madigan, the state attorney general, challenging Quinn in the Democratic primary).

Public-sector unions in Illinois have fought the last four years to prevent a significant unilateral cut in their pensions. They have thus far succeeded, but the battle drags on in the legislature and perhaps in the courts.