Fight Against ‘Right-to-Work’ Not Over in Michigan 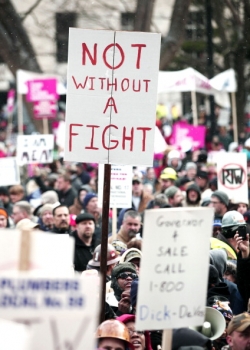 Gov. Snyder’s decision sparked three separate legal challenges. Last Thursday, the state Court of Appeals ruled 2-1 on the suit filed by public employees against P.A. 349, the public-sector right-to-work law. The court upheld the law, but unions have vowed to appeal, as well as to pursue two other lawsuits and a political campaign to oust Snyder and the Republican-controlled state legislature.

Henry William Saad and Pat Donofrio, two judges appointed by former Michigan Republican Gov. John Engler, wrote the Court of Appeals’ majority opinion. The judges determined that the “political, economic and social controversies underlying the enactment of P.A. 349 are unrelated” to the court’s duty to interpret the state constitution.

Instead, these two judges wrote that they ruled on the “limited, narrow” question brought forward by the plaintiffs: Whether the state legislature or the Michigan Civil Service Commission, a state government body that is part of the executive branch, had jurisdiction over union fees.

The majority decided state lawmakers had such power, upholding the law. But dissenting judge Elizabeth Gleicher—appointed by former Democratic Gov. Jennifer Granholm—argued that the Civil Service Commission was established precisely to “insure that the political preferences or the legislature would not infect” public employees.

Some analysts feel that the majority decision did not fully reflect the context of the acts’ passage. “Right-to-work was passed during one of the most undemocratic and partisan sessions in Michigan history,” says Roland Zullo, a research scientist at the University of Michigan’s Institute for Labor and Industrial Relations. “A friendlier court could have matched these facts against the original purpose of the Civil Service Commission and decided differently.”

“The ruling is almost certain to be appealed to the state Supreme Court,” says Karen Murphy, spokeswoman for the Michigan State Employees Association, which is one of the lawsuit plaintiffs and which represents about 4,700 of the 36,000 unionized state government workers affected by right-to-work.

Winning any subsequent court challenge, however, will be tough for Michigan unions.

Another plaintiff in that suit, United Auto Workers (UAW) Local 6000, represents about 17,500 Michigan government workers. One UAW official, who asked to remain anonymous so he could discuss the case candidly, said that the state Supreme Court’s Republican leanings will make persuading its justices to overrule the Court of Appeals a “difficult task.” The official noted that, like the Michigan Court of Appeals, Republican governors appointed the majority of the state Supreme Court justices.

While unions representing public employees respond to the Court of Appeals decision, a separate lawsuit filed jointly by ACLU of Michigan and Michigan unions before Ingham County Circuit Judge William Collette has yet to be heard.

That suit seeks to overturn both right-to-work laws, alleging the laws were passed in an undemocratic process that violated the state Open Meetings Act. On December 6, 2012, the plaintiffs point out, the Republican-controlled state legislature locked Capitol doors to bar some journalists and members of the public from entry.

“Because the statute was enacted while the public was being locked out of the capitol,” explains ACLU of Michigan staff attorney Dan Korobkin, “the law should be invalidated, which is a remedy provided by the Open Meetings Act itself.”

Michigan Attorney General Bill Schuette, a Republican, has now twice appealed to dismiss the ACLU case—and Judge Collette has let the case proceed both times. But Collette has also said from the bench that ACLU has a “real uphill battle” in its fight against right-to-work. According to Korobkin, the trial date has been set for March 2014.

Additionally, the Michigan AFL-CIO has filed a suit in federal court contending that the new right-to-work laws violate provisions of the National Labor Relations Act. Given that similar lawsuits against other state right-to-work laws, such as legislation in Indiana, failed, it is not clear if the federal challenge has legs.

The best chance unions have to overturn right-to-work, then, may be through voting out Snyder and Republican state lawmakers in the November 2014 election. “I believe the issue will be central to the 2014 election,” says Zullo. “Labor has a large task in that they will have to alter the composition of the legislature.”

Zullo suspects that “unions have their platforms in place” in these upcoming negotiations and “little will change” right away in unions’ bargaining positions because of right-to-work. “The more significant change will be long-term,” Zullo says.

Full disclosure: United Auto Workers is a website sponsor of In These Times.